SAN FRANCISCO – Filipino community leaders and Saipan- and Guam-based supporters of the U.S. Pinoys for Good Governance (USP4GG) coalition will join a peaceful “global day of protest” rally against China’s “invasion, occupation and militarization of the West Philippine Sea.” Similar protests will take place in many cities all over the world.

The Saipan and Guam protest rallies will be held simultaneously from 12 noon to 1 p.m., across the Sunleader Store at Beach Road , Garapan, Saipan and at the ITC Intersection at North Marine Corps Drive and Chalan San Antonio across from the ITC Building in Tamuning. This is the third year of global protest on Guam and Saipan. 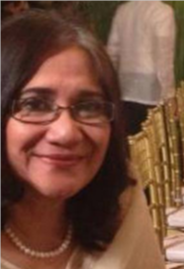 Dr. Celia Lamkin will lead protests in the Marianas against China’s claims in the South China Sea/West Philippine Sea.

Dr. Celia Lamkin, USP4GG Marianas Chapter chairwoman, said, “Although there is no Chinese embassy or consulate on Saipan or Guam, our group wants to join the global day of protest to show to the world the Filipino unity, solidarity and patriotism in defending our territories and Philippine sovereignty peacefully. This is also to show our support to the Philippine government who had the delegation in the International Tribunal Law of the Sea or ITLOS recently on a hearing at The Hague, Netherlands, to present the case of the Philippines against China over the West Philippine Sea issues.”

In New York, USP4GG National Chairwoman Loida Nicolas-Lewis will lead the rally in front of the Consulate General of the People’s Republic of China in New York City.

“We are calling on the United Nations International Tribunal on the Law of the Sea (ITLOS) to stop China from its plan to take over the entire West Philippine Sea (South China Sea) which will constitute the largest territorial heist in maritime history,” Nicolas-Lewis said. “We want ITLOS to issue its decision now, not three years from now, before China can consolidate its occupation of Philippine territories.”

In San Francisco and Los Angeles, USP4GG organizers scheduled the rally there f in front of the Chinese Consulate on July 24 from 12 noon to 1 p.m.

July 24 marks the third anniversary of China’s creation of the Sansha prefecture within a vast jurisdiction that includes islands and reefs in the West Philippine Sea. 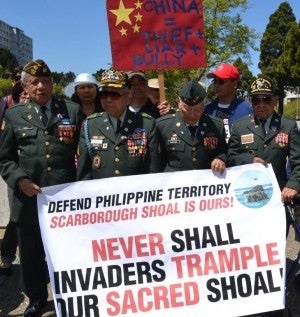 Since the formation of Sansha, China has increased the number of “aggressive actions” against the Philippines including the occupation of the Scarborough or Panatag Shoal, denying access to Filipino fishermen. It has created seven artificial islands in the West Philippine Sea, which have resulted to the massive destruction of ecosystems in the West Philippine Sea (South China Sea), which is considered to be one of the largest ecosystems in the world.

“Hence, it’s not only the Philippines will be affected but the whole world,” added Lamkin.

Recently, the president of US Pinoys for Good Governance, attorney Rodel Rodis, had a meeting in Manila with former Philippines’ National Security Advisor Roilo Golez and other leaders of various civic, youth and religious organizations who formed the Movement and Alliance to Resist China’s Aggression or MARCHA.

The coalition is expected to rally in front of the Chinese consulate in Makati City, Philippines. The US Pinoys for Good Governance and the Global Filipino Diaspora Council will be represented by spokesperson and legal counsel, attorney Ted Laguatan and members of the USP4GG Washington, DC.

Filipinos from the different towns of the Philippines are expected to join the protest rallies at their areas as well as motorcades from Cainta to Angono, Rizal organized by the Philippine Guardians International Brotherhood Taytay and Cainta chapters.

According to MARCHA, the protest rally will demand the end of the China’s territorial, economic, environmental, social and political aggression in the Philippines, especially its reclamation of reefs and rocks in the West Philippine Sea, considered by many as legitimate Philippine territory.