A July filled with launches 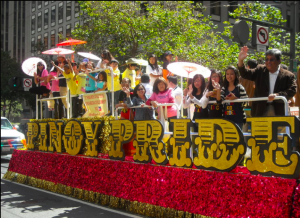 SAN FRANCISCO — Excitement was in the air as Al Perez, president of Filipino American Arts and Expo formally disclosed specifics for the upcoming 22nd Pistahan Parade and Festival during a launching at no less than the conference room at the San Francisco City Hall.

In front of city government officials, community leaders and volunteers, Perez announced new attractions at the August 8 parade. Among other things, there will be a 20-foot Philippine flag to be displayed and 200 student marching down Market Street in the form and colors of the flag as well. Making their maiden appearance this year are two 15-foot “Higantes” straight from Angono, Rizal, known for its exquisite giant papier mache creations. To top this, there will be a hundred contingents joining this year’s parade. Watch out San Francisco! www.pistahan.net 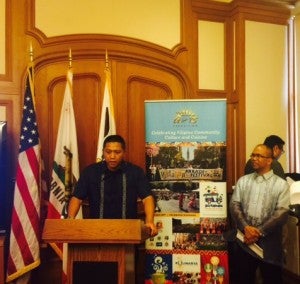 Pistahan’s theme this year is “Home Away from Home,” and the who better represent this year’s Hermano Mayor (Grand Marshal) than Nicanor “Nick” Laureano, CEO and founder of Vista Land U.S.A., a newly formed company representing VistaLand, which is the biggest housing development company in the Philippines. Laureano, a retired U.S. Air Force captain and nurse for 30 years, announced his company’s Legacy Project called F.I.E.R.C.E, in honor of “unrecognized exceptionally remarkable Filipinos who have given their lives to the service, empowerment and enrichment of Filipinos in the U.S. and the Philippines.”  Laureano nicknamed these Filipinos, a “FIERCE” group: Filipino Individuals, Engaged & Recognized in Community and Excellence. The FIERCE Awards gives a more positive meaning to the word, FIERCE – focusing on courage, strength, passion and fortitude in living one’s life and in caring for others. There will be approximately eight FIERCE Award recipients who will be honored on August 27.

BURLINGAME, California — Xicepta Sciences, Inc. launched its latest nutritional supplements called “Mind Beans” at the Embassy Suites last July 11. The endorsers of the products were impressive: body building champions like former Mr. World/USA 1998-1999 Jimmy Badra and Emeric Delczeg, who competed in Mr. Olympia; MMA champion John Terry, who proudly showed off his championship belt and had high praises to the efficacy of the supplements. 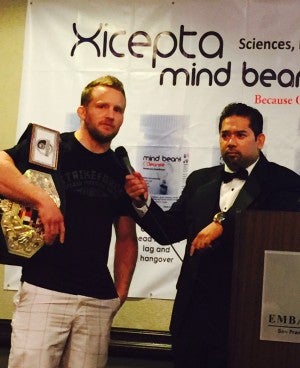 At the Xicepta nutritional supplements launch.

Sol Manaay, Ph.D and CEO of Xicepta Sciences said their supplements are “21st century science rooted in fundamentals of life and nature.” Dr. John Hayden, co-founder of Xicepta, who heads its research laboratory, has a Ph.D in molecular biology and a Ph.D In mathematical medicine among other credentials.

Xicepta Sciences, Inc. website describes its supplements as a new generation of wellness products derived from molecular and embryonic materials. Their science-based products are cutting-edge and include unique, patentable ingredients for regeneration and rejuvenation. Xicepta supplement are now available through Xicepta Global, a multi-level-marketing organization. www.xicepta.com

The art of piña weaving

SAN FRANCISCO – Le Souk arts and antiques gallery, together with the Hinabi Project, Autism Heart Foundation and the Philippine American Writers and Artist group presented the

hand-painted works of India Dela Cruz-Legaspi, world renowned master artist who uses Philippine piña fabric as a medium in her artworks while promoting the centuries-old tradition of piña weaving in Kalibo, Aklan. Piña fabric is made from pineapple pulp, which is processed to produce silk-like threads. Gossamer- like in texture, the finely handwoven fabric is hitting San Francisco fashion scene big time this year. 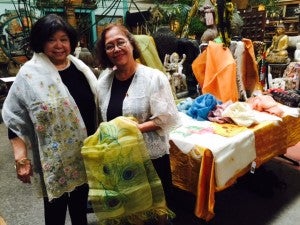 Going back to India Dela Cruz-Legaspi, she found her second calling when she met Linda Borromeo of Autism Hearts. She was able to coach autistic children to paint on piña cloth. The results were extraordinary, and a new vehicle was born to help children with autism improve their attention span and create an avenue for their artistic inclination.

Together with Dela Cruz-Legaspi was Bernadette Ofong, master weaver of T’nalak cloth from Lake Sebu, South Cotabato, who demonstrated weaving the traditional T’nalak from abaca fiber.

The two artists just arrived from an invitation to present their indigenous fabrics in Santa Fe, New Mexico. Only custom made, non-timber forest products were showcased. These indigenous materials help growing tribal communities with sustainable livelihood.

India is owner and founder of Heritage Arts and Crafts, a business enterprise based in Kalibo, Aklan that specializes in piña handwoven textiles. A visual artist, weaver,] and entrepreneur, Dela Cruz-Legaspi is a longstanding and tireless advocate of piña weaving and is instrumental in its revival and growth as an industry in Aklan.

Trunk show of handcrafted traditions at the Consulate 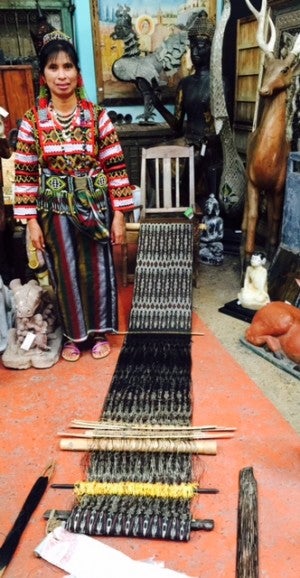 The show featured the following range of crafts: piña weaves of Kalibo Aklan, t’nalak from Lake Sebu, tinkep baskets of the Pala’wan tribe of Palawan, the hinabol of the Higaonon of Impasug-ong Bukidnon, geometric weaves of the Yakan tribe of Zamboanga and Basilan and the tapis of the Kalinga tribe.

With support and guidance for CMCC, artisans from these communities have found a new source of income while preserving centuries-old craft traditions. http://www.cmcrafts.org/index.php/aboutcmcc

Read Next
Basra, Iraq governor seeking more investments from PH
EDITORS' PICK
Quarantine violations still punishable despite deleted provisions in ‘Bayanihan 2’ – Bato dela Rosa
‘Puno na lahat:’ Metro workers brave lack of public transport, rains on Day 1 of GCQ
Leveling up your ‘lutong bahay’ with the kitchen companion you never knew you needed
Someone from the Philippines can become $356 Million richer this Tuesday
BFP raises general alarm over Mandaluyong fire
Cherry Mobile teams up with Cloud Panda PH, launches online store
MOST READ
‘If I had not been SolGen, I will make you eat your words,’ Calida tells Coco Martin
BFP raises general alarm over Mandaluyong fire
51 percent of German firms holding back investments in PH, but not because of COVID-19
5 car dealership outlets shutting down
Don't miss out on the latest news and information.