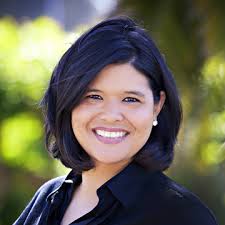 If one were to look only at the potential of the collective Filipino American vote and fund-raising base, her goal seems quite attainable.

But despite these promising statistics, there has never been a Filipino American elected to the San Francisco Board of Supervisors. This dismal record has not daunted Philhour. To the contrary she sees it as a challenge to the vision she wants to realize for the city and her district, the Richmond.

Philhour sees opportunities to strengthen relationships between neighbors and local merchants whenever she moves around the Richmond District while taking her children to school or simply shopping for goods.

“I see opportunities for us to prioritize clean, safe streets and creating housing options that are affordable for working families,” she states. “As a local business owner myself, I understand the importance of delivering each day, and I intend to do so for residents of the Richmond as supervisor.”

Philhour further says, “San Francisco is a world class city which leads the country in ideas and political innovation. The time is now for our Board of Supervisors to have a Filipino American’s perspective at the table and as a part of the decision making process.”

Philhour is counting on the support of the Filipino American community. “Our voice and growing number will help deliver my critical message of building a more livable community in San Francisco,” she stresses. “We can all be part of a city that is compassionate and creative in supporting the infrastructure we need to invest wisely in the future, while respecting the legacy of those who have come before us.”

Philhour has an Iranian father, Mark Ghafourpour, and her name, Marjan, is from Iranian word for “coral.” Her husband, Byron Philhour, is of German descent. Her mother is the former Alice Payuran Tinitigan, of Cavite City and Binakayan, also in Cavite. Alice grew up in Manila as one of nine siblings and studied at the San Francisco State University where she met Marjan’s father.

“Growing up, we spent our summers at my grandmother’s house in Binakayan. I am grateful for those memories and experiences, and especially the values that I learned at an early age—family first, do your best and give back to the community,” Philhour recounts.

Early in life, she was exposed to “wonderful mentors” at every level of government, beginning as an intern at age 16 at the office of the late Congressman Tom Lantos, the only holocaust survivor in Congress.

“After graduating in 1996 from the University of California in Berkeley, my first job was also with Congressman Lantos. I spent four years in Washington, D.C. and worked on Capitol Hill as a staff assistant and legislative aide,” Marjan narrates.

In 2001 she moved back to California and served as senior advisor to the Chief of Staff in Governor Gray Davis’ administration. “My years in Sacramento started with the 2001 energy crisis, where I learned how our state government worked in times of crisis.”

In 2006, she went on her own as an independent consultant and opened a professional services firm, Philhour & Associates, which provides fundraising, strategic advice and communications services to non-profits and campaigns. She was among 2011’s top 100 most influential Filipinas named by the Filipina Women’s Network.

Philhour emphasizes the importance of the Filipino community’s representation in all areas—not only in elected office, but also as political constituents. The community, she says, must always communicate what local government can do to support women and minority-owned businesses and take active steps to support working people in San Francisco.

“This means supporting a strong minimum wage, working towards a living wage, and keeping in mind those who work in key professions, who historically cannot afford to live in SF. It is important that we explore ideas to create more housing that is affordable for the working and middle class and increase our support network for Filipino Americans,” Philhour explains.

“I want to keep working families in San Francisco, and that means as a supervisor making a concerted effort to serve neighborhood residents so that they are fully aware and take advantage of all our government has to offer,” she states.

However, neighborhood services are her top priority. These include ensuring that the grocery stores are clean and up to date for all shoppers, that the streets are clean and safe and that local businesses feel a strong connection with a diversifying community.

Philhour is working with her compliance team to report the most accurate numbers as far as her fundraising goes, the extent of which will be public on July 31.

“I can tell you, however, that we have surpassed $100,000 raised and have met the threshold to qualify for public financing in San Francisco,” she assures. She has been busy introducing herself to Richmond District voters early and often, as she has not been elected before and, admittedly, name recognition is so very critical to success at the ballot box.

Reiterating her message to the voters in her district, this is what Philhour has to say:

“When I look around the Richmond District, I see opportunities. I will listen to what businesses and residents have to say, because that is the best way to come together and build a neighborhood that we can be proud of for future generations. I will work to ensure a strong transportation infrastructure, create more housing options that are affordable, keep our streets clean and safe, and support the local economy by strengthening the relationship between small businesses and neighborhoods.”