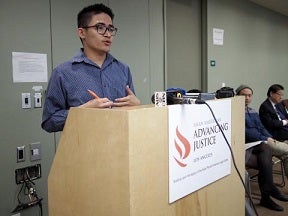 LOS ANGELES — Immigration officials may soon start visiting the homes of some young immigrants awarded three-year work permits with deferred deportation (under the Deferred Action for Childhood Arrivals or DACA) program, but immigrant rights advocates said the recipients should not be alarmed.

The United States Citizenship and Immigration Services  (USCIS) is contacting some DACA recipients who mistakenly received three-year work permits (Employment Authorization Documents, or EAD cards), to tell them they have to return these three-year cards to USCIS by July 21, 2015 or risk losing their DACA status. USCIS will issue them new two-year cards.

According to Asian Americans Advancing Justice (AA Justice LA) (USCIS) of Homeland Security has issued notices to DACA recipients that their permission to work for three years has been rescinded to two years as a result of Judge Andrew Hanen’s order in Texas v. U.S. case on February 16, 2015.

The three-year permits were issued after President Barack Obama expanded the DACA program in an executive action. But then a Texas judge in February blocked the president’s action. The Obama administration says some three-year work permits, those issued after February 16, were issued by mistake after the judge had issued a temporary injunction.

Affected DACA recipients should have received one or more letters from USCIS about returning the the-year EAD card, so individuals concerned about their situation should call or visit USCIS immediately. “Please note this action is being conducted by USCIS and does not involve Immigration and Customs Enforcement (ICE),” explained an immigrant rights advocate.

This past June, the DACA program reached its third anniversary. The program allows eligible undocumented immigrants who entered the country at a young age to apply for temporary protection from deportations and two-year work permits or EADs. 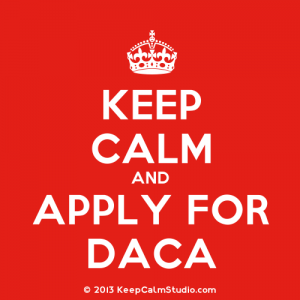 Judge Hanen’s February 2015 order required USCIS to no longer issue three-year EADs.  In an interview with INQUIRER.net, Michelle Saucedo, Legal Advocate of AA Justice LA said, “We have received calls regarding this order, since some people have received a USCIS notice asking for the three-year document back. We are simply explaining to clients that if they receive the notice, they should comply with its instructions and return the three-year documents.”

They will be receiving the two-year updated documents in the near future, as stated by the USCIS notices, said Saucedo. She continued: “It is important to note that only about 2,500 people received these three-year work permits erroneously, and are expected to return the documents to USCIS. What USCIS is doing is changing the erroneously issued three-year DACA and work permits to two-year periods, thus people will still retain the benefits they were granted.”

According to a report by NBC News this week, about 1,000 of the 2,500 permits were returned and exchanged for two-year permits. Those who haven’t complied are being threatened with revocation of their DACA status. Some of the holders have failed to respond to letters and phone calls.

NBC News quoted Marielena Hincapié, executive director of the National Immigration Law Center, that the home visits by Citizenship and Immigration Services are part of the Department of Homeland Security’s “extreme measures,” but urged holders of the documents to comply.

The visits were to occur in Chicago, Los Angeles, Dallas and Houston, said Christopher Bentley, the immigration agency’s spokesman, and only for those affected who had not returned their three-year DAA permit to work.

The City and County of San Francisco Office of Civic Engagement and Immigrant Affairs (CEIA) likewise issued a press statement that individuals should not be alarmed if contacted by USCIS. The return of the three-year EAD must be completed on or before July 21, 2015.

Notices to be taken seriously

Advancing Justice advised that if DACA recipients received a letter or call from USCIS regarding their three-year EAD, it is important that they take the notice seriously because they may suffer adverse consequences.

For those up north, the CEIA said DACA recipients can visit USCIS at 444 Washington Street, San Francisco CA to present the 3-year EAD card. No appointment is necessary. USCIS walk-up window hours are Monday- Friday 9am- 3pm.

CEIA further advised DACA recipients to make a copy of their current EAD card, both the front and back, and the three-year EAD approval notice: “Keep these for your records.”

AA Justice LA states “the success of DACA is clear. It has allowed hundreds of thousands of immigrant youth to live without fear of deportation and pursue their interests . However, there has been much confusion regarding the hold placed by Judge Hanen in the Texas v. U.S. case and how this affects DACA”.

Nationally, more than 642,000 applications have been submitted, and 96 percent have been approved. Within the Asian American community, while South Korea and the Philippines are among the top ten countries of origin for DACA applications, many Asian American as well as Pacific Islander DACA-eligible youth have not applied.

Advancing Justice – LA’s own immigrant rights policy advocate, Anthony Ng, received his approval for DACA in late 2012 and is now due to renew his employment authorization document (EAD).

“It allowed me to come out of the shadows, have access to resources, and [be] empowered to fight for myself, my family, and my community,” Ng said. Born in the Philippines, he has not only used his DACA to legally work, but also continues to encourage other undocumented youth to apply for DACA and get involved with the fight for comprehensive immigration reform.

“I know that it is a painful process to acknowledge your immigration status due to the stigma that comes along with it. But our parents and family sacrificed so much for a better life for us – it is our duty to ourselves and our families to ensure that their sacrifices are not in vain,” Ng said.