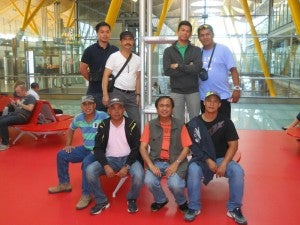 I arrived at the Adolfo Suarez Madrid-Barajas Airport from Chicago and kept to the waiting area to catch my connecting Iberia Airlines flight from Madrid to Dubrovnik. I was delighted to meet seven merchant marines, who took a Qatar Airways flight from Manila. They were waiting for their Iberia Airlines flight to Bilbao, where they would join a Mediterranean Sea oil tanker. Some had previously worked together, whereas others were meeting each other for the first time.

The Old Town of Dubrovnik is enclosed by well-preserved city walls and filled with historic buildings, as well as shops and restaurants. It is closed to vehicular traffic. Many cruise ships come to Dubrovnik, and the Old Town is a popular tourist spot. 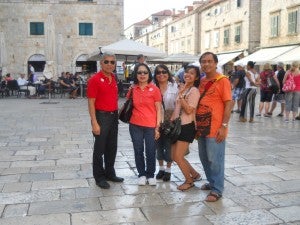 While touring the Old Town on foot, it did not take long for me to bump into other Filipino tourists. I had to be quick in taking notes and having pictures taken because some of them were in group-walking tours. What amazed me was nobody turned me down when I offered to include them in Positively Filipino’s “Pinoyspotting” section. I guess they were just glad that I spotted them as Pinoys in the first place. 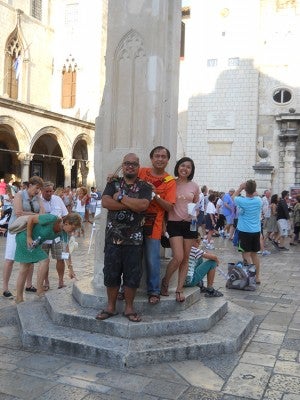 Rollan and LJ Rodriguez of Dubai. 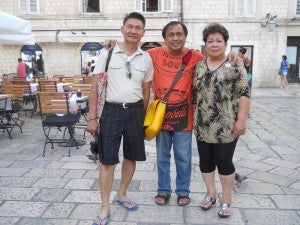 I was with a group tour, and our bus stopped in Opatija, Croatia, a popular seaside resort by the Bay of Kvarner. I was eating my lunch on a bench when I “pinoyspotted” Marilyn Sulima Von Ballmoos, who walked in front of me.

Originally from Sorsogon, she now resides in Bern, Switzerland where she works as a sales clerk at a supermarket. She and her family were vacationing in Opatija. 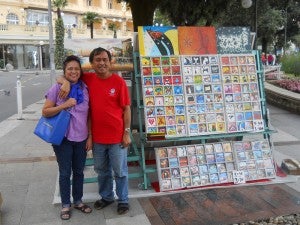 Marilyn and I posed in front of the artworks of local artist Darko Sarlija. His son Vedran Sarlija took our picture. 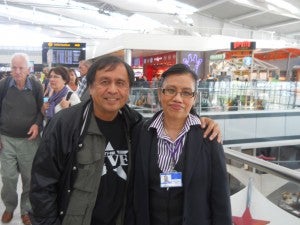 The author and Elsa Hona Acot at Heathrow.

I arrived at the London Heathrow Airport from Zagreb to make a connecting flight to Chicago. When I came out of the security control, I bumped into Elsa Hona Acot, who just finished her shift. A supervisor at a British Airways lounge, she hails from Calamba, Laguna.