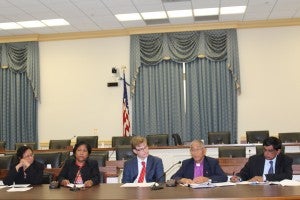 WASHINGTON, D.C. — “If a bishop is not safe in the Philippines, who is going to be safe in his country?”

This was the question posed by T. Kumar, International Advocacy Director for Amnesty International, USA during a two-hour briefing sponsored by the Tom Lantos Human Rights Commission (TLHRC) July 15.

The Tom Lantos Human Rights Commission (formerly known as the Congressional Human Rights Caucus) aims “to promote, defend and advocate internationally recognized human rights norms in a nonpartisan manner, both within and outside of Congress, as enshrined in the Universal Declaration of Human Rights and other relevant human rights instruments.” As an investigative body, it makes recommendations to policy makers and legislators.

Kumar was referring to the alleged recent harassment of the family of Bishop Solito Toquero, former Resident Bishop of the United Methodist Church Manila Episcopal Area. 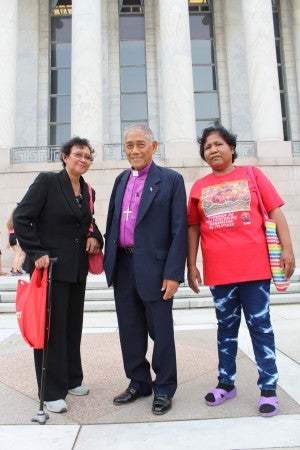 “That in itself shows the level of abuse conducted by Philippine government security forces,” Kumar pointed out. “They are being committed with total impunity, which means nobody is accountable. Instead of being punished, they are promoted – which gives them a green light to do anything they want.”

Toquero was among the panelists who described the current situation in the Philippines and provided personal accounts of torture and abuse by security forces. Also testifying were Amaryllis (Marie) Hilao-Enriquez, Chairperson of KARAPATAN (National Alliance for the Advancement of Human Rights), Marieta Corpuz, General Secretary of Samahan ng Katutubo sa Sierra Madre (SKSM) and Brian Campbell, legal advisor and steering committee member for the U.S.-based Ecumenical Advocacy Network on the Philippines (EANP).

More than a dozen congressional staff members of TLHRC, a bipartisan caucus of the U.S. House of Representatives, were on hand to listen and ask questions. Several representatives of faith-based communities, human rights groups and student organizations were also present, filling up the hearing room at the Rayburn House Office Building in Capitol Hill. 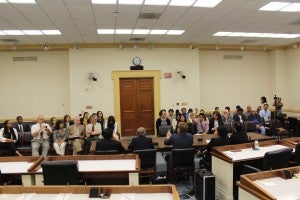 Congressional staff members of the bipartisan caucus and representatives of human rights organizations listen to a panel of speakers allege human rights violations in the Philippines.

In his testimony, Toquero recalled how two men claiming to be soldiers went to his son’s home in Cavite on June 28. “They refused to identify themselves or show their mission orders, but they wanted to talk to Raquel, my daughter-in-law,” he said. “They said they know what she has been doing.”

“What she has been doing,” the Bishop asserted, “is fighting for workers to enjoy their rights and receive decent wages.” His daughter-in-law works for the Confederation for Unity, Recognition and Advancement of Government Employees (COURAGE). The advocacy group is pushing for a national minimum wage of P16,000 a month, or about $350, for private as well as public workers.

The National Council of Churches in the Philippines (NCCP) has protested the “ongoing harassment against the government employees’ union,” and the “current environment of impunity that prevails in the Philippines.” It cited more than 20 incidents since April this year, including arrest on false charges, extrajudicial killings and disappearances.

Hilao-Enriquez, 52, a member of the Agta Dumagat tribe in Aurora province, talked about “my people’s struggles against foreign capitalist investors, big landholders and government itself.”

Their incursions on the Dumagats’ ancestral lands, she said, “is a desecration of our culture. Logging has destroyed the environment and displaced our tribal communities. These big companies are being protected by government security forces who resort to violence against anyone who gets in the way of development.”

“I have been organizing my people since I was 18 years old,” Hilao-Enriquez added. “What gives me strength and courage to continue fighting is our collective will to do the right thing.”

In her remarks, Corpuz cited how the military uses excuses to “create divisions in the community and target dissidents and anyone who opposes development in the area. Violence against indigenous communities goes on at a regular pace.”

During the question-and-answer, UCLA student Kevin Casasola asked the panelists “what we can do here in the U.S. to put an end to these human rights violations.”

Kumar replied that the American people must “be extremely vocal in pushing the State Department, not just in issuing annual reports, but in setting benchmarks. Meaningful investigations must be undertaken and military officers, whose hands are soaked in blood, must be held accountable.”

Amirah Ali Lidasan, a Muslim activist from Cotabato City in Mindanao, chimed in from the audience. “Our voices are rarely heard because it’s hard for us to come to the U.S.,” she said. “We are relying on the American people to speak out for us, so we can continue our work.”

“I will do my best as Samahang Pilipino’s external vice president to make sure these issues gain more traction as my campus gets more educated about the Philippines,” Casasola assured Lidasan. “I’ll be heading to the Philippines in August to get more hands on experience with the issues.”

Campbell summed up the panel’s recommendations by calling for “meaningful pressure” from the U.S. to “recognize and understand the pain and suffering of the victims.” He noted that the U.S. has provided “lots of military support” to the Philippine government. “This is more than symbolic, because it is real,” he said. “The Armed Forces of the Philippines are culpable of gross human rights abuses and they must be held accountable.”

Toquero and the other panelists, who later met with senior officials at the State Department, will also be speaking at the International Peoples Tribunal held this weekend at Catholic University.

The State Department, in its 2014 Human Rights Report, criticized the Philippines for the “extrajudicial killings and enforced disappearance undertaken by security forces and suspected vigilante groups; a weak and overburdened criminal justice system notable for poor cooperation between police and investigators, a meager record of prosecutions and lengthy procedural delays; and widespread official corruption and abuse of power.”