Remains found in California in 1994 ID’d as missing Filipina 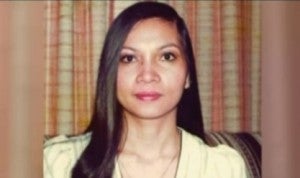 Jovita Collazo of National City, California was murdered by her boyfriend who is now in prison.

LOS ANGELES — The human remains of a Filipino woman from National City, California who was 32 years old at the time of her death have been identified, 23 years after her disappearance, police said on Tuesday, July 7.

Jovita Collazo was reported missing to authorities on May 2, 1992 and was presumed slain because her remains could not be found.

Collazo was last seen at her apartment on May 1, 1992. She had left the apartment of her husband, Michael Collazo (who she was separated from at the time but had plans to resume their relationship), to briefly go to her own place, but she never returned, according to the San Diego Union Tribune.

Sgt. David Bavencoff of the National City Police Department confirmed with the Asian Journal on Friday, July 10 that Collazo was Filipino.

Police suspected her then-boyfriend, Michael Richardson, was responsible, but he was never charged because there was no direct evidence.

However, he pleaded guilty and was sentenced to jail for Collazo’s murder in 2013, along with the murders of his wife, Thao, who was 39 at the time, and mother-in-law, Phan Lai.

The bodies of the two women were found in June 2010 at the site of a car wreck in a ravine near Lakeside, in San Diego County. Richardson was subsequently charged for the deaths of the women and was also charged with killing Collazo.

During the trial, Collazo’s daughter, who was then 32 years old, testified that Richardson had molested her several times when she was a child.

In 1994 the San Bernardino County Sheriff’s Department investigated a female skeleton found in a shallow grave in Apple Valley.

It wasn’t until 2010 when Sgt. Bavencoff re-opened Collazo’s case. Two years before, DNA from the female remains found in 1994 was sampled, but there was no match in the police department’s database.

Bavencoff collected samples from Collazo’s husband and daughter and submitted them for testing.

“We opened the case. We had never had DNA samples before, so I coordinated with the DA’s office to bring Mr. Collazo and their daughter in and I got (DNA) swabs,” Bavencoff said.

“I didn’t ever think I would see the day,” Michael Collazo said, according to the San Diego Union Tribune. “I’m in shock, with a little bit of relief. I’ve been dealing with this for so many years.”

Though Richardson admitted the murder of Collazo, he never confessed why he did it.

He was sentenced to six consecutive life terms in prison with no chance of parole at Centinela state prison in Imperial County.