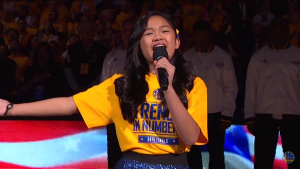 Nayah singing the U.S. national anthem at this year’s playoffs between the Warriors and the Cavs. CONTRIBUTED PHOTO

SAN JOSE, California – Now it can be told. The secret to NBA champions Golden State Warriors’ triumphant season was the team’s tandem with a little Filipino American girl with a golden voice.

And the winningest tandem it was. By most counts, every time 10-year-old Nayah Damasen opened the game with her rendition of the U.S. national anthem, chances were the Warriors got the game in the bag.

According to her mom, Mardi, 42, “Nayah sang one regular season this year that the Warriors won. Nayah always sings at the first home game. At the playoffs, she sang at all first games in each round. The Warriors won game one over the Cleveland Cavaliers.”

Like most sports buffs who find religion in stats, Mardi added, “The team that wins game one of the NBA finals historically goes on to win the series over 70 percent of the time.” And, yes, the Warriors beat the Cavs, needless to say.

The numbers don’t lie. At age seven, Nayah sang both the Star Spangled Banner and God Bless America for the San Jose Giants who won over the Inland Empire 66ers in May 2012.

She has sung several times for the Warriors’ D-league Santa Cruz Warriors since 2013, and sang at their finals when Santa Cruz got the title. The same year, she sang for the Golden State Warriors who beat the New Orleans Pelicans (formerly Hornets).

When she was 9, Nayah sang at the pre-season game three for the 49ers at their brand new Levi’s Stadium in 2014. They won against the San Diego Chargers. She also opened the ceremony for America’s Cup when Team USA Oracle came back from a disadvantage to win big. 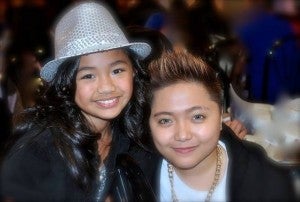 “Since 2013, we had a feeling that the Warriors would call her once the playoffs began again in 2014,” Mardi revealed. “We saw the pattern but never talked about it so as not to jinx it. But family, friends and reporters said Nayah is the Warriors’ secret weapon.”

Mardi said further: “Nayah was eight years old then, and she didn’t need to know this. All she knew was that she was singing from the heart, doing what she wanted, singing for her favorite team. I wanted to keep her grounded and humble. When ABC News came out with what people were talking about during the Western Conference Finals Round 3, I said, oh wow. Then at the Finals Press Conference, NBA announced that Nayah was singing the anthem. Then we had to contend with a flood of interviews.”

Mardi ascribes Nayah’s and her family’s good fortune “to God.” So, many people take for granted Nayah’s talent.

It was a pressure cooker inside the jam-packed Oracle Arena in Oakland during the finals. Mobs of rabid fans could rudely express their disapproval. Imagine throwing your 10-year-old daughter into the bright lights. Many parents would rather put their kids through karate lessons and master the ki to gain confidence. But little Nayah only has an amazing mastery of vibrato.

Some things could go wrong even for pros. R&B great Anita Baker couldn’t hit the high notes when she sang the anthem at the 2010 NBA Finals. Some did not appreciate Aerosmith’s Steven Tyler’s (Dad to Liz) shouted version at the 2012 AFC Championship game. 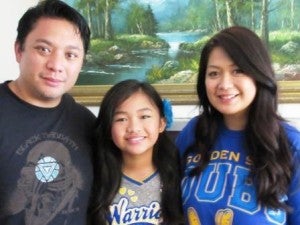 The Damasens (from left): Erwin, Nayah and Mardi. PHOTO BY HARVEY BARKIN

In 2003, Michael Bolton stopped in mid-croon to peek at the lyrics scrawled on his palm at a Red Sox versus Yankees baseball game. At the 2011 Superbowl Final, Diva Christina Aguilera sang “what so proudly we watched at the twilight’s last gleaming.” In the same year, ‘80s rocker Cyndi Lauper sang “as our flag was still streaming” at the US Open in Flushing, New York.

But each time that Nayah opened for the Warriors, there were no misplaced scats, over-produced arias or fusion arrangements. Only respect and tradition. At every beginning of the line, she would battle the fan’s loud cheers and win with a loud, clear voice by the second word, as if her diaphragm belonged inside a Bose sound system.

Said Mardi, “The crowd went wild with every line from the song. They were screaming. It’s as if energy bounced off from Nayah to the spectators then to the players.”

How she got up there

But it was not always pitch perfect for Nayah. She was six and sick when she got selected out of a hundred to audition to a live audience at San Francisco’s Pier 39 for the 49ers. Mardi said Nayah started too high. It was “too emotional” for Nayah. But she bounced back and was invited to sing again for the 49ers in the 2014 pre-season.

Nayah’s name is Hawaiian for dolphin, said Mardi. They thought she would be born in Hawaii and they fancied Thandie Newton’s character’s name in MI:2. They thought Nayah was apt because as a baby, she would rock from side to side like Flipper, the TV dolphin.

Mardi related, “Since she was two, Nayah liked singing Barney and Disney princesses songs. She got the rhythm and the lyrics down pat. So she would perform for the family. At about three, her control of vibrato was beginning. But we still didn’t make anything out of it.”

At five, Nayah could sing (the Disney character Mulan’s and Christina Aguilera’s cover) “Reflections.” Then she got some roles in plays by the Evergreen Studio of Music & Arts.

Almost a year later, Dad Erwin, 44, said they put Nayah through vocal lessons by Greg Farbizio (American Idol finalists Thia Megia’s coach). “His studio happened to be right down the street from where we used to live in Evergreen. Megia was the youngest contender in Idol. But Nayah was younger, probably Farbizio’s youngest student at that time,” he recalled.

Their big break was a fluke. It happened when a neighbor organized a fund-raiser against food allergy. Mardi suggested that Nayah sing at the event. Turned out the organizer was a big Warriors fan who had sold an indecent amount of tickets. So Nayah got invited to sing for the Warriors.

When Nayah began making the rounds of small and big league teams, Erwin and Mardi finally saw the career path for Nayah. In 2014, Nayah and siblings were transferred to the on-line public schools Connections Academy and Charter Home School Academy. Nayah is now being managed by music executive and president of Treadwell Entertainment Tina Treadwell.

Erwin said, “Tina brought in Insync and the Backstreet Boys in the 1980s and she has worked with Britney Spears and Christina Aguilera.” Her agent is Coast to Coast Talent Group, which caters to youth and adult talents in print, theater, commercials, pro sports and voice-overs. 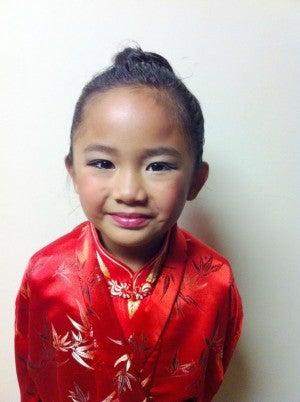 Nayah’s current vocal coach is Eric Arceneaux who was honored in 2007 as one of Youtube’s Top 100 most popular musicians of all time. Arceneaux also got the kudos from the vocal coaches of Taylor Swift, Keith Urban, Rihanna and Linkin Park.

Nayah meets with her vocal instructor for a whole hour every Wednesday. Then there’s an hour and a half sessions once a week with her acting coach. But schoolwork isn’t forgotten, so it goes on at nine every morning.

At home, she still does voice warm-ups. For breaks, she memorizes lines from any of her projects. Audition calls occur any time in the week. Mardi said Nayah has gone to auditions weekly in the last eight months. She has gotten calls from some big names, but the Damasens are bound by clauses not to say who.

Nayah has actually sung the Philippine National anthem and “Dahil sa Iyo” a while back. But she doesn’t understand the lyrics (“But they got me to sing it in English, too). She performed as a guest at Charice Pempengco’s March 2014 Ebel Wilshire concert in Los Angeles .

Erwin said they got offers for Nayah to sing some OPM, but the fact that Nayah had a manager and an agent somehow blocked the projects. But the Damasens aren’t closing that door.

For herself, Nayah likes Leah Salonga and Beyonce. Her favorite Warriors are Stephen Curry (who once hailed her as “the little girl with the big voice”), Andre Iguodala and Klay Thompson (“he’s sooo tall!”).