Filipino priest in trouble over camera in Oregon church bathroom 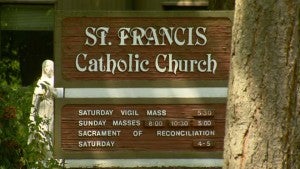 A Filipino priest was disciplined for not telling police that a boy found hidden camera was found in his Oregon church’s bathroom. KOIN6 PHOTO

SAN FRANCISCO – The Archdiocese of Portland, Oregon has placed a Filipino priest on administrative leave after he waited more than three weeks to tell police about a hidden camera found in a church bathroom, while falsely assuring parishioners that police was investigating the matter.

Father Ysrael Bien, 34, was placed on leave for his failure to follow church protocol and immediately report the camera. Bien, who was born in the Philippines, was ordained into the Portland archdiocese in 2010.

“It is deeply troubling that well-established Church protocols for the protections of parishioners were not followed,” Archbishop Alexander Sample said in a statement last week. “Finding a hidden camera in a church restroom should have been the cause for prompt and decisive action.”

Bien was not named as a suspect, though officials reportedly said in a search warrant affidavit they believe he may have “aided or abetted” whoever planted the camera, according to a report by the newspaper the Oregonian.

In April a teenage boy found the camera disguised as a wall outlet, inside a single-toilet men’s bathroom at St. Francis Catholic Church in Sherwood. According to court records, the boy pulled it from to wall to show Bien.

The priest told the boy and his father that he would report the matter to police, but he did not. Instead, he hid the camera.

Bien sent emails and messages to the boy’s parents with details of the supposed police investigation, also saying that the police didn’t need to interview their son. The boy’s parents grew increasingly suspicious in the absence of a police report.

Bien contacted Sherwood Police about the camera only on May 20 to report it stolen. Though police have yet to find the camera, which they said had no memory card when it was initially brought to Bien.

At the time of discovery it was not recording people, according to a Sherwood police spokesman. Police are still investigating and do not have a suspect.