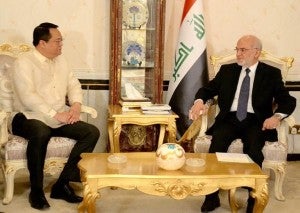 Iraqi Foreign Minister Dr. Ibrahim Al-Jaafari expresses his desire to further expand the level of cooperation between the Philippines and Iraq during a courtesy call by Chargé d’Affaires Elmer G. Cato of the Philippine Embassy in Baghdad. (IRAQI MINISTRY OF FOREIGN AFFAIRS PHOTO)

BAGHDAD, Iraq — Underscoring the importance of 40 years of bilateral relations between Iraq and the Philippines, Iraqi Foreign Minister Dr. Ibrahim Al-Jaafari on July 12 expressed Baghdad’s desire to further enhance its level of cooperation with Manila.

“We are looking forward to deepening our ties with the Philippines,” Foreign Minister Jaafari told Elmer Cato, Manila’s new envoy in Baghdad during a courtesy call at the Ministry of Foreign Affairs.

Minister Jaafari, who had previously served as Prime Minister of Iraq, welcomed Cato, a career diplomat who recently assumed the post of Chargé d’Affaires en pied of the Philippine Embassy here, and assured him of his support.

Minister Jaafari expressed hope that the Philippines and Iraq would be able to conclude agreements in a number of areas during the 8th Joint Commission Meeting to be held in Manila in August.

In response, Cato conveyed to Minister Jaafari the importance the Philippines places in its relations with Iraq as well as Manila’s desire to further enhance the level of cooperation with Baghdad.

A former journalist and overseas worker, Cato joined the Department of Foreign Affairs in 1998. He was previously posted at the Philippine Mission to the United Nations in New York and the Philippine Embassy in Washington, D.C.

Cato, who succeeded Ambassador Edsel Barba, assumed his new post in Baghdad as the Philippines and Iraq are commemorating the 40th anniversary of the establishment of diplomatic relations.