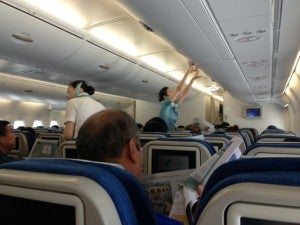 NEW YORK CITY – An elderly Filipino woman from Queens has sued Korean Air Lines for injuries she sustained while onboard KAL flight KE0624.

According to a court document obtained by the Philippine Daily Mirror, Miguela Reyes of Queens, New York was traveling back to New York on May 9, 2015 when she was allegedly struck by a heavy luggage that fell on her right shoulder from the plane’s overhead compartment while she was seated.

“She cried a lot due to the unbearable pain she experienced during the flight.  During the layover at the Seoul Incheon International Airport, Defendant KAL did not attend to Plaintiff’s injuries and did not assist her with her complaints,” Reyes claimed in her lawsuit through her lawyer, Felix Vinluan, who is based in Woodside, Queens.

She claimed that her repeated complaints of unbearable pain to KAL staff were ignored. She said, however, that a flight stewardess, who called the incident an “accident,” offered Tylenol to ease her pain.

When KAL arrived in New York on May 9, Reyes immediately went to a hospital in Queens for treatment of the symptoms directly resulting from alleged injuries she sustained. Her chief complaints were “upper back on the right side, right shoulder pain, and difficulty in breathing”.

Reyes was admitted on that day and tests revealed that she “suffered from and had a rotator cuff tear. Her severe shoulder pain aggravated and led to difficulty in her breathing and respiratory failure,” according to the complaint.

Eleven days after, on May 20, Reyes was discharged from the hospital.

The complaint, referenced as CV-15-03332, invoked Article 17 of the Montreal Convention, which stipulates that the “carrier is liable for damage sustained in case of death or bodily injury of a passenger.”

Reyes is claiming that as a result of KAL’s alleged negligence “or other wrongful act within the meaning of the Article 21 of the Montreal Convention,” KAL is therefore liable for damages exceeding 100,000 Special Drawing Rights as provided in Article 21″. 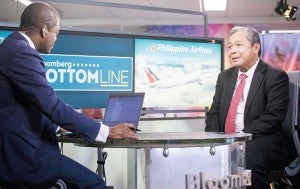 Jaime Bautista, PAL President, in an interview with Bloomberg News in New York.

Reyes did not respond to queries sent to her by the Philippine Daily Mirror through her lawyer. On the other hand, Elena Hor, KAL supervisor of Reservation in Los Angeles returned a telephone call and said: “I will forward your email to our legal department.  I have no right to comment on it.”

Meanwhile, Philippine AirLines (PAL) has not responded to an email sent by Philippine Daily Mirror to PAL’s Customer Relations, as suggested by “Leah” (she did not disclose her surname), PAL’s duty station manager based in New York, when she was contacted for this report. An email was also sent to PAL’s president, Jaime Bautista, on June 3, but he also has not responded.

Barely two months in the operation of its Manila-New York route, PAL was sued by Cherilyn G. Darilag, a middle-aged mother of two children who resides in Queens.  She was one of about 250 passengers scheduled to leave New York for Manila on May 17 via PAL’s Airbus 340-300 jet, Flight PR 127 on May 17, 2015.  The flight was canceled due to a “mechanical problem of the plane.”

A complaint dated May 20, 2015, was filed by lawyers of three law offices based in Manhattan and Queens represented respectively by Gabriel dela Merced, Manuel Quintal and Felix Vinluan. It was received by the Court on May 26, 2015 and recorded with Index No. 705386.

According to dela Merced, one of Darilag’s lawyers, Darilag took a leave of absence from work to travel to the Philippines to pick up her son who is staying there.

“She has not been back to the Philippines for about 20 years and was all excited and proud to be on board PAL,” dela Merced said.

Darilag was looking forward to arrive in the Philippines in the evening of May 18 to meet her family and relatives at the airport. She was on board the plane, which was on the airport tarmac for about four hours when passengers were told to deplane and collect their luggage from the luggage carousel.

Although PAL provided hotel accommodation to passengers for that night, the process of booking all passengers was apparently not a smooth one considering the number of passengers.  Passengers were supposed to take the same plane when its mechanical was expected to be resolved, according to the complaint.

The complaint also cited the ordeal which Darilag had to endure. Darilag, who is a middle-aged woman, carried with her a heavy luggage from the Air Train to a shuttle bus that was waiting for passengers to be transported to the hotel.  Darilag said that no PAL representatives or agents assisted her.  Also, while waiting for four hours at the Radisson Hotel lobby for her room assignment, she said there was no room provided to her.

Instead, Darilag said she and another PAL passenger decided to transfer to the Hilton where they were able to get a room.

“Leah,” whom this reporter spoke to on the phone for this report, said she was at the Radisson at that time amid the commotion going on. She was hesitant to respond to some of the questions fielded to her. She said, “Delays happen and PAL’s concern is the safety of its passengers.”

The following day, May 18, Darilag went back to JFK airport and pleaded with PAL ground staff to be booked for a flight that was leaving that morning but was told that it was fully booked.  She was advised to wait and given hope that by the afternoon, she and the other stranded passengers may eventually leave.

The lawsuit alleged that by 3 p.m. of the same day PAL informed the passengers that the plane, which they originally boarded, had an engine problem and had to undergo maintenance check.

According to Darilag, PAL issued flight transfers that were not honored by other airlines (Eva Air and China Airlines) since the vouchers “were not properly filled out and/or lacked validation stamps by PAL employees.”

Darilag also complained of poor customer service.  “There were no posted bulletins or notices within PAL’s terminal area that would advise passengers who flight was canceled or what they should do or how they could seek assistance.”  When she called PAL’s customer service number to inquire when she could leave for Manila, she felt insulted.

“She was insulted by PAL’s on hold music that expressed its “we care” and “we are the best” theme,” the complaint said.

As to “all Causes of action,” the lawsuit asked to “award Plaintiff and the class punitive damages in an amount to be determined at trial, for a total award of no less than Ten Million Dollars” and “grant Plaintiff and the Class such other and further relief as the Court deems just and proper.”

Read Next
How US gay marriage ruling will change our kumpare’s life
EDITORS' PICK
Latest patient brings number of COVID-19 cases in Cebu to 29
Anne Curtis, Angel Locsin, and Gabbi Garcia: Celebrity tweets on the state of the nation
Senators on Duterte ‘shoot’ warning: ‘Let’s address hunger’ instead
Vico Sotto replies to NBI, asks for clarification
DOLE Bicol shells out P45.7M in aid for 9,000 displaced workers
Macalintal: NBI on ‘fishing expedition’ as no ‘genuine’ case vs Vico
MOST READ
Angelica Panganiban on endorsing Duterte in 2016: ‘Patawarin niyo ko’
PACC to NBI: Probe Robredo for ‘competing with national govt’ in fight vs COVID-19
PACC’s COVID-19 motto? ‘Lahat ng tutulong, ikukulong’ — Lacson
5 Filipinos on Forbes Asia’s “30 Under 30” roster
Don't miss out on the latest news and information.