How US gay marriage ruling will change our kumpare’s life 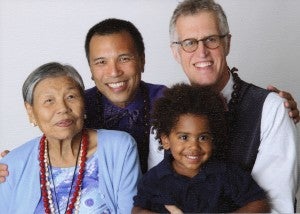 Gay couples just earned the right to marry in the U.S., hailed as a major victory in the fight for equality, even as others denounce it as an affront to Christian morality.

The U.S. Supreme Court decision means many things to different people. But it isn’t just about gay weddings, or gay wedding cakes, or about my gay friends celebrating at the San Francisco Pride weekend, even as my other friends and relatives warn about the world plunging into a world of sin.

Let’s focus for a moment on what the ruling means in concrete ways to real people.

Take my friend John Manzon-Santos. He’s the ninong of our eldest son, our kumpare, for whom the legalization of gay marriage means significant life changes.

He lives with his partner, Mickey, and their son, Andres, in Oakland. They’ve been together for about 14 years and have been legally married since 2013. Because they live in California where gay marriages are recognized, they enjoy many of the rights my wife and I enjoy.

But before last week, moving to another state where gay marriages are not recognized would have been complicated. 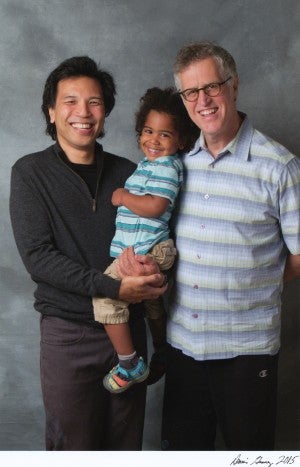 That changed with the Supreme Court ruling on Friday.

Being married lets you save a lot of money in the U.S. For example, my wife and I pay less income taxes because of our status. That’s not true for gay couples, even those who’ve been together even longer than us.

John and Mickey will now be able to enjoy that benefit, too. “As a married couple, we would file federal and state income taxes jointly,” John told me.

And there are other financial benefits, said John, who consulted his friends, another gay couple, Leonard Rieser and Fernando Chang-Muy, who were lead plaintiffs in a recent same-sex marriage ruling in Pennsylvania.

“We would avoid certain inheritance taxes if one of us died,” John explained. “Generally, we would be able to secure various kinds of public benefits, including Social Security survivors’ benefits, military benefits, etc.”

It’s not just about money. The legal right to marry is also about dignity.

Think of this for a moment: When you’re sick or in the hospital, struggling with a serious illness, wouldn’t you want your wife or husband to be there, to make sure you’re getting the best care?

That’s true in my case. If I ever get sick, I know my wife, Mara, could take the lead in making important decisions about my health and hospitalization. Other straight couples enjoy that right. Until Friday’s ruling, John and Mickey didn’t. Now, they do.

“Now,” John said, “either of us is able to take an active role, when needed, in making health care decisions for the other, without being challenged about the nature of our relationship anywhere in the U.S.”

“For example, in case of emergency, in situations where I’m incapacitated, or at end of life, I can be sure that Mickey, as my spouse, would have the standing to consult with health care providers, that he would be seen as the decision-maker,” he continued.

In the past, not having that right meant pain, even humiliation.

Imagine your wife or husband being gravely ill or dying, and other people telling you that you don’t have the right to be with him or her.

“I remember so many heartbreaking instances over the years where, in a same-sex couple, the family of origin of one partner, who was either terminally ill or had died, stepped in and made decisions without consulting the other partner. I remember attending several funerals where the family of origin, often due to religious reasons, didn’t involve the deceased’s same-sex partner in the arrangements nor even mention their sexual orientation or acknowledge their long-term relationship.”

For John and Mickey, the gay marriage ruling is also about Andres. He’s three years old.

Gay parents are not rare in the San Francisco Bay Area where they generally have the same rights enjoyed by straight parents. The great news is that they can now enjoy those rights throughout the country.

“We would be recognized as equal parents by schools, health care providers, social service agencies–and this would be true throughout the U.S.,” John told me.

For Andres, he said, “The positive impact on his sense of self is huge,” which could make the road ahead less challenging for Andres, who is Latino and African American.

“The fact that we already experience the joys and realities as a same-sex interracial Asian-White couple raising a trans-racial adoptee who is growing up as a young boy of color in a post-Ferguson USA, we are hopeful that, with this decision, our nation’s culture … has been successfully challenged.”

“He will grow up knowing,” he continued, “that his loving parents, his Ama and Babbo, are every bit as legitimate as the heterosexual parents of his friends.”