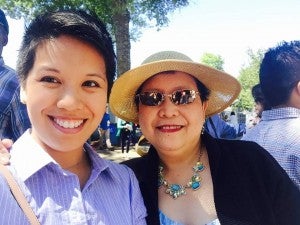 WASHINGTON, DC — Following the Supreme Court’s favorable rulings on gay rights and Obamacare, Filipino Americans joined millions of supporters across the country to celebrate two historic victories, in an outpouring of emotion here in the nation’s capital.

“The Court upheld an important tool to prove housing discrimination under the Fair Housing Act. The Court then for the second time upheld the Affordable Care Act (ACA), ensuring that subsidies for health insurance will continue for qualifying low-income Americans. Finally, the Court confirmed marriage for same-sex couples is a fundamental right, something a majority in this country already support,” explained Vargas.

“This trio of cases highlights the Court’s responsibility to ensure equality and fairness in all aspects of our lives, from housing to healthcare to who we love,” he added.

Vargas, who serves as executive director of GLMA: Health Professionals Advancing LGBT Equality, was among those lucky enough to be in the courtroom on June 26 when the decision on same sex marriage was issued.

“It was truly an amazing moment to be there with so many advocates who have worked so long to ensure equality and respect for LGBT people,” he said. “Today was a great day for the nation, recognizing the basic humanity of same-sex couples who now have the freedom to marry across the country. And this brings us one giant step closer to ensuring LGBT experience equality, respect and dignity in their everyday lives.” 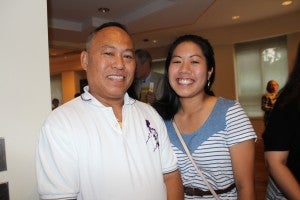 Ben de Guzman, a national coordinator of the Diverse Elders Coalition, added, “Decisions about the ACA and housing discrimination help make sure some of the most vulnerable people in our communities will have access to health care and protections.”

De Guzman says further: “Today’s ruling on the Obergefell [same-sex marriage] case represents the pinnacle of the marriage equality movement and an important victory that many of my dear friends, colleagues, and family have fought for. The fact that we’re also burying nine victims of racial violence in Charleston, SC is a sobering reminder that, in the words of the Rev. Dr. Martin Luther King, Jr., while the arc of history bends towards justice, it’s a slow bend that requires all our hands to keep pushing.”

On Friday outside the Supreme Court, Hyacinth Alvaran and her friends and co-workers from the Human Rights Campaign cheered and hugged upon hearing the news.

A day earlier, she awaiting the court’s decision on Obamacare. “As a daughter of a breast-cancer survivor, I’m also jubilant that the Supreme Court upheld the Affordable Care Act,” said Hyacinth. “In the Philippines, people don’t have the safety nets that this country have. They are turned away from clinics and hospitals if they cannot afford care. Here, in the U.S., my family and I don’t have to face that fear anymore. Indeed, no family should.”

She later posted this White House message on Facebook: “Five years in and more than 16 million insured Americans later, this is no longer just about a law. This isn’t just about the Affordable Care Act, or Obamacare. This is health care in America.”

Reflecting on the last two days, Bing Cardenas Branigin of Reston, Virginia admits being “profoundly moved” and overwhelmed with emotion. “I’m a mother of two millennials, and what just happened in the last 48 hours means a lot to me personally,” she said. 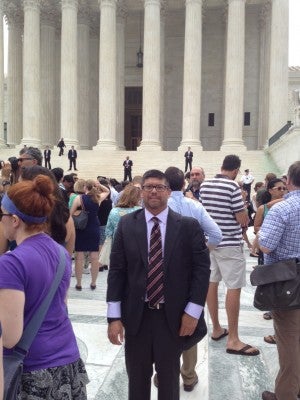 Hector Vargas joins the celebration outside the Supreme Court. PHOTO BY JON MELEGRITO

“I am even more hopeful now about my children’s future, now more than ever. Progress may be slow in coming, but yesterday’s and today’s decisions are truly inspiring. Only in America.”

Inside the Philippine Embassy, about three miles away from the Supreme Court, Filipino Americans gathered for a book reading on “Pinay Power.” Many in the audience were also in a celebratory mood.

“I have a gay son. He can now marry anyone he chooses, but he must fall in love first. I’m glad I’m in DC when this is all happening,” she gushed.

Mondejar flew in from her home in San Francisco to promote FWN’s book, DISRUPT. Proud. Loud. Leading Without a Doubt. Delighted by the Supreme Court decision, Mondejar’s opening remarks provided a timely context to the evening’s focus. It was, after all, about “Pinay Power” – Filipina women “disrupting their lives, careers and communities” as they become “strong advocates for social issues that affected their families.” 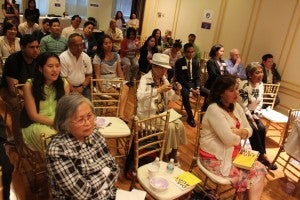 Filipino Americans listen to “Filipina Disrupters” during a book reading on Pinay Power at the Philippine Embassy. PHOTO BY JON MELEGRITO

In his welcome message, Deputy Chief of Missions Patrick A. Chuasoto recalled that “women empowerment has always been embedded in our culture.” Citing Filipina warriors Gabriela Silang and Teresa Magbanua, he described them as “Pinay Power at its finest.” In that spirit, he concluded, “let us disrupt the status quo.”

Unwitting or not, his remarks at the end of a tumultuous day may well have captured the essence not only of the evening program inside Romulo Hall, but of the stunning two days in the nation’s capital.

As expected, not everyone in the audience was happy that night. Community leader Tessie Calderon of Springfield, Virginia strongly disagrees that same-sex marriage should be legalized.

“We need to preserve the sanctity of marriage, which should only be between a man and a woman,” she said. “I say this as a devout Catholic and this is my firm religious belief. However, I respect the right of gay couples to live together and not be lonely. That would be pitiful.”

“I was brought up to believe in certain things, but this is not one of them,” he says about gay relationships. “But I try to keep an open mind.”

His daughter, Christine, who brought her dad to the book reading, adds that “our family continues to engage each other in conversations, which is good.” A college junior at the University of Maryland, Christine notes that gay rights and health care are important issues to her generation.

On Obamacare, Victor Lorica of Potomac, Maryland remained skeptical. “Politicians have bungled our country’s health care system, ” he complained. “It’s the hospitals and the big pharmaceuticals who are benefiting from this law. Individual practitioners like me are the ones being squeezed out. I am all for the law’s intent, which is to insure as many people as possible and not deny them insurance because of pre-existing conditions. But it needs to be improved, not repealed. I’m doubtful, however, that this Congress will come to its senses.”

Alvaran remains cautiously optimistic, nevertheless. “It’s a new day in America, and we have much to celebrate,” she pointed out.

“There is much more work that needs to be done. But, I hope the Supreme Court’s ruling sends a message to the entire community, including the Filipino community, that we as a people are equal, regardless of our sexual orientation and gender identity. It is a message that I have long been waiting for, and I am so proud and happy that this day has come.”