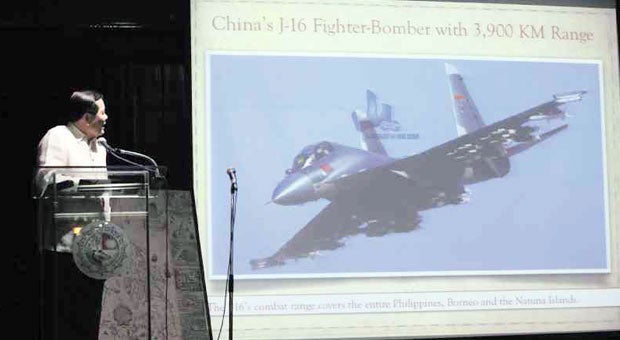 A MATTER OF JURISDICTION Supreme Court Senior Associate Justice Antonio Carpio lectures on the sea dispute between the Philippines and China in a Pamantasan ng Lungsod ng Maynila forum on Thursday. “If the arbitral tribunal says it has jurisdiction, then we’ve almost won.” JOAN BONDOC

The Philippines would have “almost won” its case against China’s “nine-dash line” claim over the West Philippine Sea should the arbitral tribunal rule it has jurisdiction over the case, a senior magistrate said on Thursday.

Supreme Court Associate Justice Antonio Carpio said the oral arguments on the jurisdiction of the United Nations arbitral tribunal would be the last big hurdle the Philippines would face before it could get a favorable ruling from the court.

“If the tribunal says, yes, we have jurisdiction, then we’ve almost won. Because we can’t see how the tribunal will say that the nine-dash line claim is valid. So the impediment really is on the jurisdictional side,” Carpio told reporters after discussing the West Philippine Sea issue in a forum at the Pamantasan ng Lungsod ng Maynila on Thursday afternoon.

He explained that the oral arguments in The Hague, Netherlands, next month will be more of a procedural issue in which the Philippines needs to prove that the tribunal can rule on the case.

“If the tribunal says yes, we can rule on it, then we have a hearing on the merits of the case, and that will probably be in November. Then we can expect a decision on it on the first quarter, maybe March, next year,” Carpio said.

During his lecture on the West Philippine Sea issue, Carpio emphasized that under the UN Convention on the Laws of the Sea (Unclos), the preeminent international statute on the use of seas and oceans, high seas, such as the West Philippine Sea, can be used by everyone and nobody can claim it as part of their territory.

Because of this doctrine, Carpio said he believed that the ruling on the merits of the case would be straightforward.

“Everybody agrees that once the tribunal rules that they have jurisdiction, then we’ve practically won,” he said.

Such is the significance of the ruling on the jurisdiction that Carpio said that the Unclos would crumble should the tribunal decide it does not even have jurisdiction on the case.

‘No jurisdiction, no Unclos’

If the tribunal has no jurisdiction, “then there is no more Unclos in the (West Philippine Sea). And if there is no Unclos here, then India can claim the Indian Ocean, Mexico will claim the Gulf of Mexico and then it’s the rule of the naval cannon. I don’t think that will happen,” Carpio said.

Once the Philippines gets a favorable ruling from the tribunal, Carpio said that the Philippines would have to work to convince the world to urge China to follow the ruling.

“It is the duty of everyone to convince the world that what China is doing is wrong,” he said. “We need a ruling from an impartial tribunal that the nine-dash line claim is void. With that, we will go to the world to help us convince China. This (campaign) isn’t only for us, it’s for everybody.”

The Philippines filed the case against China before the UN arbitral tribunal, seeking to invalidate Beijing’s expansive nine-dash-line claim and stop its incursions into the Philippines’ exclusive economic zone, in 2013. In April this year, the tribunal set oral arguments for the jurisdiction element in July.

Give up claim, China told