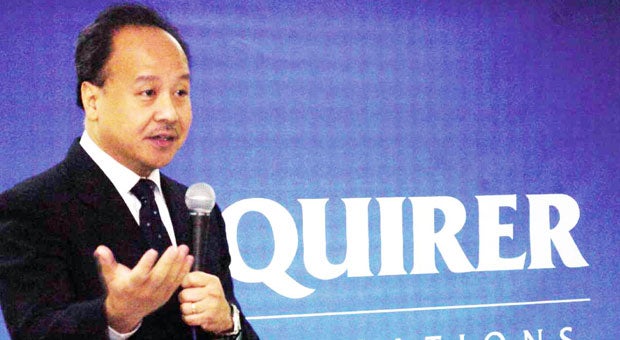 SINGULAR HONOR The legal community welcomes the election to the International Criminal Court (ICC) of Inquirer publisher and former University of the Philippines Law Dean Raul Pangalangan, who fills the seat vacated last year by Sen. Miriam Defensor-Santiago, the first Filipino and Asean elected to the ICC. “May he continue to make the nation proud by practicing law in the grand manner,” says Santiago, as she congratulated her former student at the UP College of Law. INQUIRER PHOTO

“This is an honor not just for myself but for our country as well, one that builds upon a commitment to human rights that the Filipino people advanced at Edsa I,” Pangalangan told the Inquirer late Wednesday night, minutes after his election.

“I’m glad that the member states of the ICC have affirmed their confidence in our country, and that our government has entrusted me to seek the mandate to serve as ICC judge,” he added.

“The campaign was difficult because I had to get the support of each member state,” Pangalangan recalled. “It required close coordination within the Department of Foreign Affairs (DFA) and its key embassies. I was impressed that, when the votes came in, they matched the estimates made by the DFA team with pinpoint accuracy! ” he added.

Pangalangan was elected to fill the seat vacated by Sen. Miriam Defensor-Santiago, the first Filipino and Asian, who was elected judge in December 2011 but resigned on June 3, 2014, due to her lung cancer. Santiago’s nine-year term would have started March 11, 2012. Pangalangan will hold office until 2021.

Created in 1998, the ICC, an independent body separate from the United Nations system, is the first permanent international court mandated to deal specifically with grave crimes committed against humanity.

Following in the tradition of the Nuremberg and Tokyo war crime tribunals established after World War II, the ICC is governed by an international treaty, the Rome Statute, that was approved by the Philippine Senate in 2011.

The battle-tested former dean of the University of the Philippines College of Law and erstwhile Inquirer columnist admitted being nervous over the closely contested election at The Hague in the Netherlands, where he ran against Jordanian representative Ibrahim Aljazy, himself a law dean.

He was “in suspense” while waiting for the results of the vote, the Inquirer publisher said. “What made it worse was that between the first and second balloting, the delegates called for a two-hour lunch break. Needless to say, I didn’t eat much for lunch.”

Although the states parties had set aside two days for the voting based on previous elections that required several rounds before the required majority could be met, Pangalangan managed to get the two-thirds majority vote—59 out of 123 ICC member states—on the second round of voting on day one.

The post said: “The Permanent Mission of the Philippines to the United Nations congratulates Professor Raul Pangalangan, former dean of the UP College of Law, on his election as judge to the (ICC). The mission also congratulates Team Philippines for a job well done! #TeamPH.”

In a statement released on Thursday, Assistant Secretary Charles Jose, spokesperson for the DFA, thanked the international community for its support. “This is indicative of their recognition of PH’s continuing commitment to upholding human rights and efforts to address international crimes of genocide, crimes vs humanity and war crimes,” he added.

Pangalangan, 56, is no stranger to the ICC, being a Philippine delegate to the drafting of the Rome Statute and its subsequent amendments. He also cochaired the decadelong campaign for the Philippine ratification of the statute.

The screening committee of the ICC concluded that Pangalangan had “considerable knowledge of, and established competence in international humanitarian law and the law of human rights, areas on which he had been focusing throughout his career.”

“The panel further recognized his work as professor of law at the University of the Philippines, and his teaching at prestigious institutions abroad, among them, Harvard Law School, The Hague Academy of International Law, Irish Centre for Human Rights, and Thessaloniki Institute of International Public Law and International Relations,” the ICC statement said.

In his answer to the ICC questionnaire, Pangalangan cited his work at UP, the seat of the student protest movement during the martial law years, against censorship, illegal arrest, torture and rape.

He was also the counsel for people arrested during the state of national emergency declared by then President Gloria Macapagal-Arroyo in 2006.

The all-out campaign to have Pangalangan elected to the ICC was waged from the US to the European Union, with strong support from DFA officials and Philippine Ambassador to the Netherlands Jaime Victor C. Ledda, Ambassador to Belgium Victoria S. Bataclan, Ambassador Lourdes O. Yparraguirre, the country’s Permanent Representative to the UN, and Ambassador Irene Susan Natividad, deputy permanent representative.

Pangalangan is married to fellow UP law professor Elizabeth Pangalangan, with whom he has four sons. He was twice nominated as associate justice of the Supreme Court.

Before he was appointed Inquirer publisher in 2012, Pangalangan wrote a weekly Inquirer column, “Passion for Reason.”

The Philippine government last month nominated Pangalangan to the ICC post ahead of the special elections.

“He is a person of high moral character, impartiality, and integrity and possesses the qualifications required by Philippine law for appointment to the highest judicial offices,” the Philippine government said in a note verbale sent to the Assembly of the ICC.

“His expertise has been tapped by, inter alia, the Philippine Supreme Court (as amicus counsel), the Philippine Judicial Academy (the official training academy for judges) and the International Committee of the Red Cross (as an international humanitarian law expert),” the note verbale said.

In a statement, Inquirer president Alexandra Prieto-Romualdez said the paper received “with great pride” news of Pangalangan’s election to the ICC.

“Dean Pangalangan joined the Inquirer almost three years ago to ensure that the paper adhered to the highest journalistic standards, canons of good taste and editorial policies. In a short span of time, he helped the Inquirer work with different stakeholders to ensure that the Inquirer stay in touch with all the important issues. Of course, we will miss him and we will have difficulty in finding his replacement but his expertise is needed now at the ICC,” Romualdez said, adding that while she wished him the best in his new role, Pangalangan “will forever be a member of the Inquirer family!

Inquirer board chair Marixi R. Prieto described the ICC posting as an “honor.”

“From being our columnist to becoming our publisher, Raul has been very clear in his views and opinions, and has practised the Inquirer’s promise to the country—that is, to deliver balanced news and fearless views to every Filipino.

“Dean Pangalangan’s competence in international law, the very same reason he was elected to the position in the first place, is outstanding, and we couldn’t have been any prouder. As one of the representatives of the Asia-Pacific region, we know he will give our country the rightful representation it deserves. Let this personal milestone inspire every Filipino lawyer to always serve, protect and uphold their duties as responsible protectors of the land.”