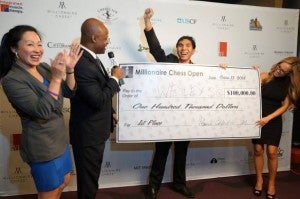 Wesley So exults after receiving a giant replica of the $100,000 check from organizers Maurice Ashley and Amy Lee for winning the 2014 Millionaire Chess Open championships at Planet Hollywood Resort & Casino. PHOTO BY PAUL TRUONG.

LAS VEGAS — Finally, they’re doing it — combine the thrill of the centuries-old game of chess with the excitement of a modern-day TV game show.

The spice? The chance to be an instant millionaire. As they often say, only in Las Vegas.

Organizers of the Millionaire Chess Open championships have come up with an innovative addition to the tournament that will provide more prizes to what is already the richest chess competition in history.

Maurice Ashley, organizer of the five-day tournament at Planet Hollywood Resort & Casino, scheduled October 8-12, announced Tuesday, June 2, that a player can walk away with as much as $1 million in cash, in addition to the regular prizes.

Ashley, a chess grandmaster who put up the championships for the first time last year with entrepreneur Amy Lee, said this is how it will work:

The nine section winners will compete with each other on Millionaire Monday, the last day of the tournament, for a chance to pick prizes in cash and kind from 64 envelopes randomly placed on a giant chessboard.

One square, called the Millionaire Square, will contain $1-million in cash.

If the player picks that square, he walks away an instant millionaire, Ashley said.

The odds of 1 in 64 are pretty good, he added. More details will be announced later.

“Millionaire Chess remains committed to continually seek new ways to raise the profile of chess in the United States and around the world,” Ashley said.

Putting up big prizes and holding satellite tournaments are some of the ways to attract a new generation of chess fans, he added.

Grandmasters Hikaru Nakamura and Wesley So will head the cast of more than 1,000 players from 40 countries competing in the tournament.

So won the top prize of $100,000 last year, beating Webster University teammate Ray Robson in the knockout match for the Open Section title.

Competitions in eight other sections, based on international chess federation on FIDE ratings, are also on tap, with rich prizes for each section from the total tournament pot of $1-million.