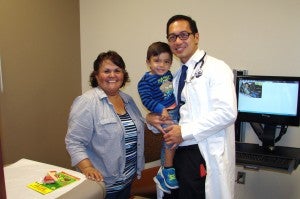 Dr. Ryan Chio, now a general pediatrician at Earlimart in California, is the only doctor in town. CONTRIBUTED PHOTOS

LOS ANGELES — Among foreign medical doctors practicing in the United States, whose ranks are declining, pediatrician Ryan Chio is rather unusual. At 35 years old, he is among the few practitioners under 40 who obtained their education in the Philippines. It may be several more years before other foreign medical graduates could have the same opportunity he had.

“This is because the numbers of accredited American medical schools and U.S.-trained medical students have increased substantially in the last decade, while the number of residency slots barely budged,” Chio explained.

“But with the new Affordable Care Act, also known as Obamacare, the U.S. already faces a shortage of physicians in many parts of the country, especially in specialties where foreign-trained physician are most likely to practice,” he added.

Chio earned his medical degree from Davao Medical School Foundation in 2005. Working abroad, specifically in the U.S., had always been his dream.

But getting a medical work authorization in America was a “long roller-coaster journey” for Chio, who is also part-Chinese. “Finding my future was not easy, especially since I only had a tourist visa and was not allowed to work in order to support myself financially,” he said.

Chio came to New York in 2007 right after taking the medical board exam in the Philippines. Then on a B1 tourist visa, he had to convert his status to an F1 student visa in order to take classes at Kaplan Medical for the state medical exam. Later, when he got matched for residency training, the student visa had to be converted to a training visa (J1). 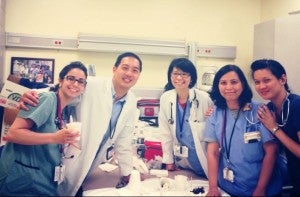 Chio enjoying a break with colleagues at the ER where he was a chief resident.

“There were four medical state exams that I needed to pass before I could apply for a residency training,” he said. “Not only did I have to pass it, but I had to get a high score to compete with the Americans and other international medical graduates around the world.”

Jobless in the face of such pressure, Chio was fortunate to have college friends who let him stay for free in their homes. A group of Filipino nurses at the Wyckoff Heights Medical Center also helped him out in so many ways. But it was a hard life.

“I would stay overnight in a Dunkin’ Donuts to study. I would be sleeping in a couch while being away from my family for years. My classmates from med school had all started their residency training in the Philippines, and there I was, still reviewing for the exam and still searching for my future. I got depressed and homesick for a while, but I fought hard with hope and prayers,” Chio recalled.

Though very costly, a live course review was necessary in order to get a good grade in the state exam.

“My parents from the Philippines would send me money for my expenses. Imagine the conversion of a Philippine peso to a U.S. dollar. So I made a deal with them, I told them to invest in me, one last time.”

To convince his parents, Chio had to speak the hard truth.

Had he stayed in the Philippines, he said he would still be asking for financial support. Resident physicians in the Philippines are getting 10,000 to 15,000 pesos (US$220 to $340) allowance a month and with all the expenses, “that is nothing.”

Establishing a practice back home isn’t easy either, even after all the training. “It will take so many long years to live a comfortable life. Sadly, that’s the reality of being a doctor in the Philippines,” Chio said.

Chance of a lifetime

After passing the medical state exam, Chio finally got his chance of a lifetime.

“I had interviews with some U.S. hospitals and luckily got matched in Elmhurst Hospital at Mount Sinai School of Medicine in New York.”

He did three years of pediatric residency training and an extra year as a chief resident. But this didn’t turn out to be his happy-ever-after. He had to move to California soon after his residency training to provide medical services in an underserved area. This was the only way to waive his J1 visa and acquire an H1 working visa.

“I am currently holding an H1 visa and my green card is due next year,” he said with a smile on his face. “It seems easy, but not really. There was a time when my visa was denied. I also got held by immigration officers at the airport several times. [I have] received a visa notice of intention to revoke by the USCIS [U.S. Citizenship and Immigration Services]. But my faith and perseverance have truly helped me surpass all these.” 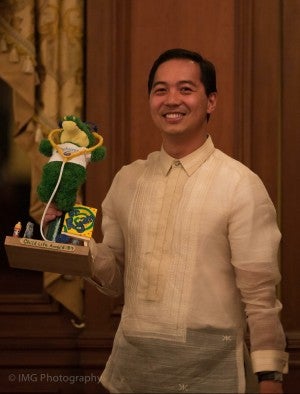 So what makes a Filipino doctor special compared with others?

“We are hardworking, sincere and excellent. We have proven time and again that we are a people with an industrious attitude. [The] Filipino doctors, nurses, medtechs, hospital staff whom I know are excellent. We treat the patients as if they’re family and we give them sincere and quality care.”

Chio is confident that Filipino doctors are well-equipped and competent for work in the U.S.

“We use the same medical books. The one thing that I got from my medical experience in the Philippines is having a good clinical eye. We know when the patient is really sick or not. Filipino doctors are good in handling difficult cases. We are more ‘hands on’.”

He recalled: “I remember when I was a medical clerk in a government hospital in the Philippines, we worked 35 hours straight on duty. I triaged the patient, put an IV, drew blood, pushed the bed to the radiology and to the ward. Sometimes you’d need to share money for [the patient’s] IV set or medicine.

“In the U.S., my experience is somewhat different, the working hours as a resident have to follow ACGME [Accreditation Council for Graduate Medical Education] rules and regulations. We were allowed to work for certain and short quality hours. Documentation is also very important. Evidence-based medicine is well practiced in the U.S. We follow the guidelines to manage and treat our patients.”

Chio, currently a general pediatrician at Earlimart in California, hopes to inspire other young doctors with his life story. “Chase your dream and take a risk. Life is meant to be a challenge because challenges are what will make you grow.”