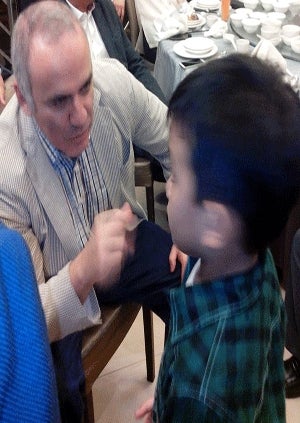 The child prodigy from Escalante, Negros, created a sensation last year when he jumped two sections to finish strongly in the Under 1900 Section. He has moved up to the U2000 this year.

First place offers $30,000 in this section, but focus will be in the Open Section, in which grandmasters Hikaru Nakamura and Wesley So are anticipated to battle for the $100,000 top prize.

After scrambling for a sponsor to help him with the stiff registration fee, Nouri finally made it, thanks to Jeorge Balares of JBS Income Tax & Notary Service.

“Thank God I finally made it,” said Nouri. “Thank you to Sir Jeorge,” he added in a Facebook posting.

Born in Negros on December 12, 2005, and named after the great Russian grandmaster Alekhine, Nouri started playing chess at five under the tutelage of his father, Hamed Nouri, himself a FIDE master.

To give his son full attention, Hamed quit his job and moved the family to Metro Manila, where Alekhine earned a scholarship at Far Eastern University.

In June 2013, during the Asean Age Group Chess championships in Thailand, Nouri earned an outright FM title with his victory in the Open 8-under category, making him the youngest Filipino FIDE Master and the youngest FIDE Master in the world.

He and his father moved to California last year, and his participation in the Las Vegas tournament is part of his preparations for the World Youth championships this year.

The Millionaire Open chess tournament is set for October 8 -12, with a hectic twice-a-day schedule and tie-break playoffs.