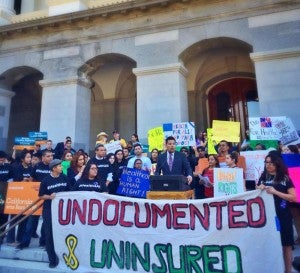 SAN FRANCISCO—Consumer and health advocates are calling on California voters to lobby their representatives to approve Senate Bill 4, the Health for All Act, which hurdled the appropriations committee May 28 and is up for floor debates this week.

Authored by Sen. Ricardo Lara (D, Bell Gardens), SB 4 is seen as a historic bill on many levels. It seeks to expand health insurance coverage to undocumented immigrants. If signed into law, California could precipitate similar action nationwide in order to bring closure to what many believe is a human rights issue.

“As a leader in the United States on a number of issues, including implementation of the Affordable Care Act (ACA), California can and must provide our nation with an example of how we ensure that all of our residents have the option of, and access to, high-quality health care coverage,” said Filipino American Assemblymember Rob Bonta (D, 18th District), a principal coauthor (he is a principal supporter, not a co-author) of SB 4, told INQUIRER.net.

“Our undocumented community members should not have to wait any longer for the basic right to coverage and access to care,” Bonta added.

ACA specifically excluded undocumented immigrants from health insurance coverage, either through government-subsidized programs such as Medi-Cal or health care exchanges mandated by the law. The state exchange is called Covered California.

Although various programs support pregnant women and cancer treatment regardless of immigration status, in most cases, the uninsured do not receive medical attention until their illness becomes life threatening.

California is home to some two million undocumented immigrants, who despite their status contribute to an estimated $2.2 billion in state and local taxes collected from the immigrant population per year. Legislative documents also show that California immigrants also generate more than $130 billion worth of economic activities annually.

According to a May 2015 report by the Kaiser Family Foundation, 52 percent of those remaining uninsured among nonelderly adults – people aged 19 to 64 years old — are in a family with at least one full-time worker. While the majority, or 54 percent, of uninsured nonelderly adults are Hispanics, Asian and Pacific Islanders are among a solid 22 percent without health insurance coverage, the study revealed.

“This bill is beneficial to all our families especially loved ones who are undocumented,” Debbie Arzadon, a Filipino American nursing home representative to the executive board of Service Employees International Union-United Healthcare Workers West, told INQUIRER.net. “They don’t have an intention to stay in the U.S. yet they’re already here for the reason of wanting to look after their children.”

Arzadon noted that while some coverage is granted under Medi-Cal to undocumented immigrants, treatment usually stops when surgery is required.

“Right now, Medi-Cal covers undocumented immigrants for minor injuries and rehabilitation under the supervision of social workers. But this is kept confidential and the coverage of course is very limited. Lalo na kapag may surgery nang involved, napepending na yung service [Especially when surgery is involved, the service gets discontinued],” Arzadon said.

“There are people who are opposed to this bill because of the cost it entails for the coverage. My response is that the cost is minimal compared to the value of ensuring a healthy population,” Segarra told INQUIRER.net in a phone interview.

“Even though they’re undocumented, they’re working and paying taxes. Consider how much more they could contribute when their health is managed,” she added. “If you think about the healthcare perspective of prevention, it is easier to establish regular wellness check-ups compared to none at all such that every time I see a doctor, I would need urgent care or emergency service. Whether I have money or not, the hospital is mandated to help me so there is cost associated with that.”

With last week’s amendments at the Senate appropriations committee, SB 4 will allow everyone aged 19 and under to enroll in Medi-Cal. At the same time, it will mandate the California Health and Human Services Agency to seek a federal waiver on undocumented immigrant coverage based on Section 1332 of the ACA, which allows states to adopt alternative solutions.

If the federal waiver is granted, undocumented Californians aged 19 and over would be allowed to buy health insurance through Covered California with their own money, while those who are low-income would be made conditionally eligible for Medi-Cal coverage through a capped enrollment program.

“Access to preventive care keeps people healthier by providing regular checkups and screenings, and early diagnosis of health problems ensures those problems can be treated before they become overly expensive,” Sen. Lara said in a press statement.

“By ensuring everyone has access to health care, we can improve the health of our entire community, limit the overcrowding of emergency rooms, and reduce the costs of healthcare in California. Excluding people from access to care hurts the overall health of our communities, and does not reflect California values,” Lara further explained.

In response to the May 28 vote on the Health for All Act, Ronald Coleman, government affairs manager at the California Immigrant Policy Center, also issued the following statement:

“Today’s vote is a significant first step on the road to achieving health justice for every Californian, and comes in the context of a complex budgetary process. We are thrilled that all children and some adults will now have the opportunity for basic health care coverage, which is a basic human right.

At the same time, Coleman said, “We know there are many more steps to travel on this road, and much more work to protect many more lives. And we know that from here, we will only go forward and continue to build upon this precedent. We renew our commitment to keep working until not a single Californian suffers or dies from a treatable condition, no matter where they were born.”

This story was made possible with support from a New America Media fellowship.