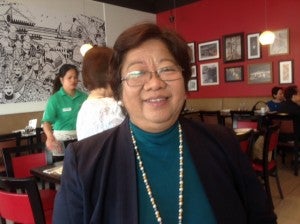 Consul General Rosalita “Rose” Prospero also swore into office the newly elected officers of the association at the Kapihan in Barrio Fiesta restaurant on Steeles Avenue West on Saturday, May 30.

The new consul general took office at the Philippine Consulate General in Toronto on May 24.
Newly elected president of UPAAT, Dr. Alice Bustamante-Herrera, announced that ConGen Prospero had signed up as a member of UPAA Toronto during the Kapihan.

Prospero graduated from the University of the Philippines in 1983 with a BA in psychology. She has a master’s degree in international studies from the University of Sydney in Australia (2001). She also holds a master’s degree in business administration from the Graduate School of Business of Ateneo de Manila University (1989) and a diploma in international relations from the Institute of Social Studies, The Hague in the Netherlands (1996 fellowship recipient).

Before joining the Philippine foreign service, Prospero worked in the Department of Science and Technology in various capacities, from International Science Relations Officer to head of the International Technology Cooperation Unit (1984-92). 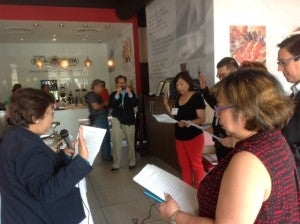 From February 1997 to June 2003 Prospero was vice consul for the Philippine Consulate in Sydney, Australia and ended her term there as a consul.

She was the Director of Division III (Agriculture and Fisheries; ESCAP, International Commitments Fund) and then Division IV (Socio-Economic Issues) Office of United Nations and Other International Organizations at the Department of Foreign Affairs from June 2003 to September 2006,.

Prospero served at the Philippine Embassy in Paris as Minister and Consul General then Minister and Deputy Permanent Representative to UNESCO from September 2006 to January 2013,.