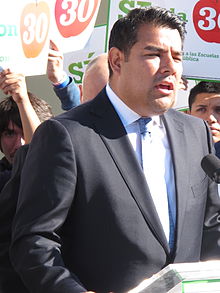 for All Bill sponsor.

to some 1.25 million undocumented immigrants in California — more than one third of whom are Asians and Pacific Islanders, passed the California Senate’s Health Committee on April 15.

Senate Bill 4, also known as the 2015 Health for All Act, sponsored by Sen. Ricardo Lara (Dem-Bell Gardens) passed 7-0, according

to reports by the Orange County Register.

Capital Public Radio’s KXJZ News said the bill was supported unanimously by the committee’s Democratic members, Republican members of the same committee, however, abstained from the vote.

The bill is now up for funding by the Senate Appropriations Committee. The measure is part of a 10-bill legislative package that aims to expand health coverage

, among other protections, to undocumented immigrants.

is denied, SB 4 directs the state to establish a mirror exchange to provide equivalent coverage options to undocumented individuals.

to cover at least $1.3 billion annual cost, the reason SB 4 stalled in a legislative committee last session, reports said. The legislative package, likewise, does not include budget plans for the coverage expansion.

Last year, Lara was working with officials in Washington, D.C. on a federal waiver to expand Medi-Cal coverage to immigrants and on ways to limit the cost of expansion, which the senator claims is down to $400 million.

And on April 7, Lara announced the expansion to health care coverage for all Californians, regardless of immigration status. He directed the Department of Health and Human Services to seek a waiver from the Federal government to allow undocumented immigrants the ability to buy health insurance

from the state’s health care exchange

“No one should suffer and die from an easily treatable condition, no matter where they were born. With the Health for All, we’ll help California families thrive — and set a powerful model for the nation to follow. Our state’s health and economy stand to benefit,” Lara said.

“By ensuring everyone has access to health care, we can improve the health of our entire community, limit the overcrowding of emergency rooms and reduce the costs of healthcare in California, “ according

Meanwhile, State Senator Janet Nguyen (GOP-Garden Grove) reportedly said, “I’m open to the discussion of access to health care for all, because I’m a firm believer in preventive health care.”

Nguyen, however, raised her concern aired by KXJZ, “I think the state needs to be able to pay for it and take care of the current enrollees while we look at ways to bring in more enrollees.”

Immigrant rights groups lauded the Lara bill. “It is the first step to making sure that every Californian has equitable access to health care,” Doreena Wong, spokesman of the Health Access Project at Asian Americans Advancing Justice, said on Thursday.

“As an organization serving the Asian American, Native Hawaiian and the Pacific Islander (AANHPI) immigrant communities for over 30 years, we have seen the critical need of health care for the more than 400,000 estimated undocumented AANHPIs, or about 15 percent of California’s total undocumented residents,” Wong added.

Filipino Americans expressed mixed reactions when interviewed by INQUIRER.net over the weekend.

Jessie Go, a Fil-Am owner of Phone Depot inside Serramonte Mall in Daly City said, “It’s unfair. It’s a waste of taxpayers money. How can they justify to ask for health care when they didn’t even work and contribute, where’s the justice there?”

Go said that instead of using the taxpayer’s money for the undocumented, the state and the government could use it somewhere else, like helping veterans, the retired elderly and citizens that needs welfare.

“Why not pass the immigration reform law first?” Go said, before the undocumented immigrants can avail of the health coverage entitled to citizens and permanent residents.

Jose “JP” Padua, former US Army soldier and a semi-retired supplier for a construction

company, also did not approve of the bill.

Padua, a resident of Richmond, California, believes that undocumented immigrants are not entitled to the benefit. “They should legitimize their presence. It’s not fair for everybody, we’re working here like dogs.”

On the other hand, a paralegal who works for a huge insurance

company and who spoke on condition of anonymity supported the bill: “It would be alarming to know if one of your loved ones or family is sick or ill walking around with a communicable disease and without health coverage.”

“I’d prefer that these undocumented people be properly immunized and treated because it’s not safe for our kids and our society,” she said. “ In fact, once they’re under the system, they would no longer be a burden to society. “

Undocumented immigrants can get better health care in California than the rest of the country, according

to Steven Wallace, associate director of the UCLA Center for Health Policy Research and co-author of a new report, “California Is the First in Care for Undocumented,” released Thursday.

The report was a joint effort by the UCLA Center for Health Policy Research, the UC Global Health Institute and the UCLA Blum Center on Poverty and Health in

Most states have restrictive policies. “It is frustrating that so many states have policies that ignore or exclude a group of people who work hard and contribute so much to our society, “ Wallace said.

“The neglect or outright discrimination of the undocumented does not just hurt workers and their families. It hurts the communities that rely on them for the basic labor that makes our society function.”

US undocumented rely on luck to stay healthy – new study