US set to defy China’s claims 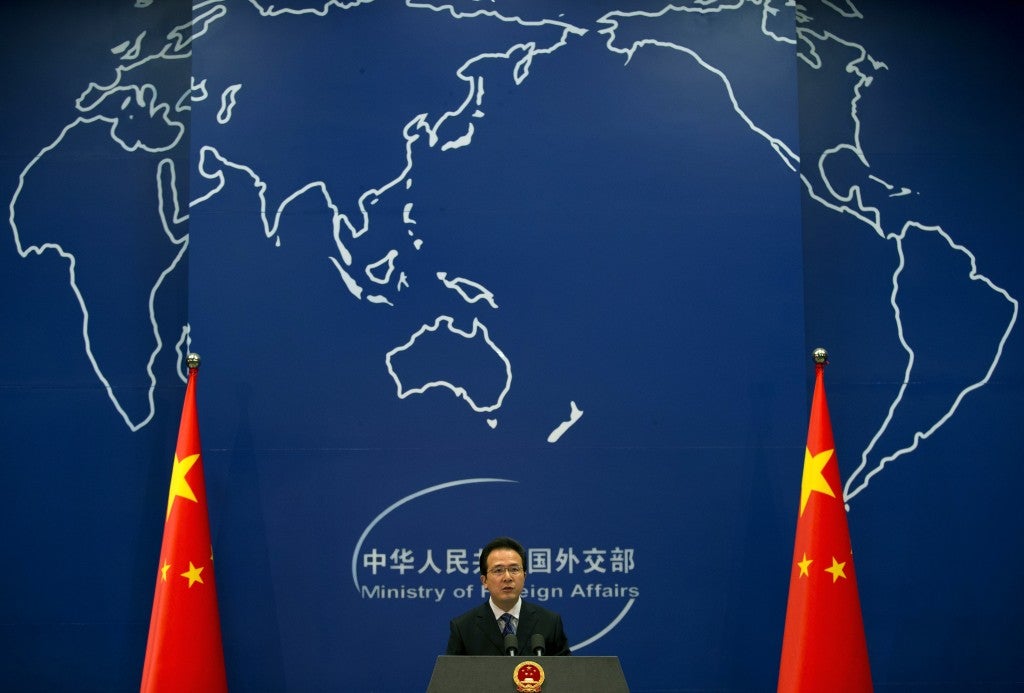 In this May 20, 2014 file photo, Foreign Ministry spokesman Hong Lei speaks during a daily briefing at the Ministry of Foreign Affairs office in Beijing, China. China said Thursday, May 21, 2015 it is entitled to keep watch over airspace and seas surrounding artificial islands it created in the disputed waters of the South China Sea, following a reported exchange in which its navy warned off a U.S. surveillance plane. Speaking at a regular daily briefing, Hong reiterated Beijing’s insistence on its indisputable sovereignty over the islands it has created by piling sand on top of atolls and reefs. AP

WASHINGTON—The United States vowed on Thursday to keep up air and sea patrols in international waters even after the Chinese Navy warned a US surveillance plane eight times to leave the airspace over artificial islands it is building in the disputed South China Sea.

The Pentagon also said US surveillance aircraft and naval ships have yet to test China’s territorial claims around artificial islands, but that could be “the next step.”

Although the United States does not recognize China’s claims of sovereignty around the man-made structures, American P-8 surveillance planes and naval vessels patrolling the area have not ventured within 22 kilometers of the artificial islands—the standard territorial zone around natural land.

“That would be the next step,” Col. Steven Warren, spokesperson for the Pentagon, told reporters.

Asked if the military would move to within that sensitive zone, he said: “We don’t have any announcement to make on next steps. We are going to continue our routine flights.”

The senior US diplomat for East Asia, Assistant Secretary of State Daniel Russel, told a media briefing in Washington that Wednesday’s US reconnaissance flight was “entirely appropriate” and that US naval forces and military aircraft would “continue to fully exercise” the right to operate in international waters and airspace.

He said the United States would go further to preserve the ability of all countries to move in international waters and airspace.

“Nobody in their right mind is going to try to stop the US Navy from operating—that would not be a good bet,” Russel said.

China said on Friday actions by the United States in the South China Sea were “irresponsible and dangerous” and called on it to stop.

But the United States said it would keep up air and sea patrols in international waters.

Beijing regards almost the whole of the 3.5-million-square-kilometer South China Sea as its own, its claims overlapping with those of Brunei, Malaysia, the Philippines, Vietnam and Taiwan.

Recent satellite images suggest China has made rapid progress in filling in land in contested territory in the Spratlys and in building an airstrip suitable for military use and that it may be planning another.