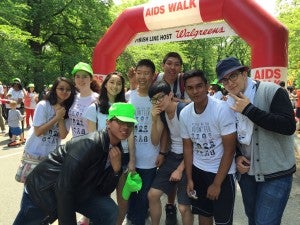 Several young Filipino American and other Asian students served as volunteers at the NY AIDS Walk. PHOTOS BY ELTON LUGAY

NEW YORK — Many Filipino Americans joined the 30th Annual New York AIDS walk, which raised up to $4.8 million with more than 30,000 walkers filling Central Park on May 17 for the event, the world’s largest single-day AIDS fundraiser.

“By raising more money than we raised last year, we have successfully reversed the trend of declining returns on AIDS Walk events each year,” said Kelsey Louie, the new CEO of event organizer Gay Men’s Health Crisis (GMHC), which provides lifesaving programs to thousands of people living with HIV/AIDS in New York, New Jersey and Connecticut.

The 10-kilometer walk benefits GMHC and 40 other vital AIDS service organizations throughout the tri-state area.

Ending the AIDS epidemic by 2020 is a challenge that every state must face, New York Gov. Andrew Cuomo emphasized.

“New York has always said, ‘We stand for equality and we stand for acceptance and we stand for non-judgmentalism, and we believe that we can come together in one community and accept and celebrate our differences. And that makes us stronger as a people. And that is the best of this state and it is the best of this nation.’ And we are going to show the nation that we are committed to ending the AIDS epidemic by 2020 and we challenge every state to join us in this crusade,” Cuomo said in his opening ceremony speech.

The epidemic remains largely invisible in the Asian and Pacific Islander community, according to Filipino American Larry Tantay. “I want to bring light to that,” he told INQUIRER.net. Participating in the event for 10 years now, Tantay is the youth pride coordinator of Rockland’s Candle, a community awareness network for a drug-free life and environment. He facilitates and manages support groups for LGBTQ youth and provides cultural competency training to students and youth-serving professionals.

“Even though I’m not with APICHA [API Community Health Center] anymore, I still believe in its ideals and I want to make sure our voices are heard by the entire community.”

Tantay joined this year’s walk with the NYC Gay Men’s Chorus, one of the biggest fundraisers for AIDS Walk N.Y.

GMHC is optimistic about the community’s resilience amid the longstanding battle against AIDS. 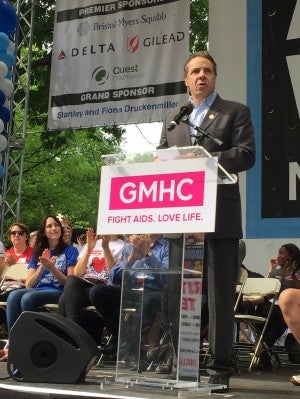 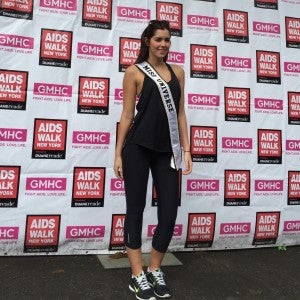 “The future of GMHC is that we are going to continue doing the same thing we do every single day, which is save lives and advocate for public policy that works for people living with HIV and AIDS,” its Chinese-Japanese CEO told this reporter.

In the program, Kelsey acknowledged three of GMHC’s long-term survivors – Eric, Nancy and Ramon. “Without them, our victories over the last 30 years would not be possible. Your strength and resilience inspire all of us.”

He also stressed the importance of lowering new HIV infection rates. “We must also increase public pressure on all funds to find the cure. AIDS is no longer a death sentence, thanks to advances in medical treatment. But today’s advances in many ways are yesterday’s advances. Silence equals death. Our collective aspiration should be nothing short of a cure. We have been walking for 30 years and we will continue to walk until we find a cure.”

The event is doubly significant to Miss Universe 2015 Paulina Vega.

“This is a great event that everyone should support,” she said. “The Latin people are also largely affected by this epidemic, and so I am here today for the Latin community. The Miss Universe Organization has always been supportive of AIDS/HIV awareness campaigns. In fact, this is my main thing.”

For Nick Wechsler, actor in the ABC soap “Revenge”, the event means “unifying and beating the bully”. “We are well on our way to getting people not to have a stigma about it, and I just want to be part of helping raise awareness.”

“I’d like to volunteer for all kinds of events but I think this is a good place to be,” said Leila Miller, Fil-Am student at Manhattan High School for Math, Science and Engineering at City College.

“It is important to raise awareness because there are still so many people out there who are not fully aware of this epidemic. We all need to help in finding its cure.”

Notable participants of the daylong event included Tyne Daly (“It Shoulda Been You”), Kit Williamson (“Mad Men”), Bellamy Young (“Scandal”), and CBS-2 News Anchor Dana Tyler. Montego Glover from Broadway’s “It Shoulda Been You” sang a stirring a cappella rendition of “True Colors”, while Victoria Clark of “Gigi” closed the opening ceremony with a performance of “You’ll Never Walk Alone”.