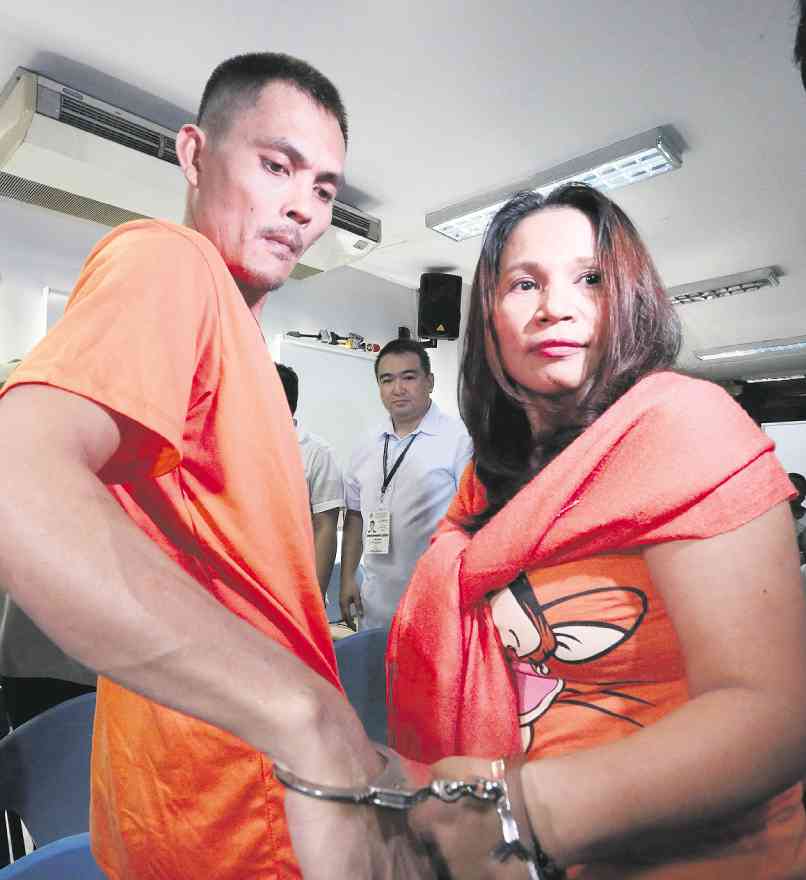 ‘SHE’S INNOCENT’ Ma. Cristina Sergio and Julius Lacanilao, the alleged recruiters of Mary Jane Veloso, are handcuffed to each other during their appearance before the Department of Justice Wednesday. JOAN BONDOC

“She did not know she was carrying illegal drugs,” Ma. Cristina Sergio said of Mary Jane Veloso, the Filipino drug mule sentenced to death after being arrested in Indonesia with several kilos of heroin hidden in her luggage in 2010.

Veloso, who was among nine other drug smugglers scheduled for execution last month, was given a last-minute reprieve after Indonesia learned that Sergio, her alleged recruiter, was in police custody.

Veloso, Indonesian authorities said of her reprieve, could help shed light on the operations of the drug syndicate that recruited her.

In her 31-page counteraffidavit at Wednesday’s preliminary investigation of the human trafficking and illegal recruitment charges filed against her and live-in partner, Julius Lacanilao, Sergio said she believed Veloso was innocent of drug trafficking.

“She was victimized and taken advantage of due to her being weak-willed, her great desperation to find a job and her trusting nature. We join the authorities in pressing for the arrest and prosecution of those who victimized her, but not us who had nothing to do about it,” Sergio said in her counteraffidavit prepared with assistance from the Public Attorneys’ Office.

The Veloso family and her lawyer welcomed Sergio’s statement.

“This will help Mary Jane very much. It’s the truth; we’re all here because we want the truth to come out,” Veloso’s mother, Celia, told reporters.

Veloso’s counsel, Edre Olalia of the National Union of People’s Lawyers, described the counteraffidavit as “a welcome development.”

Said Olalia: “This is what we have been saying all along, that she is a victim [of human trafficking]. We will bring this to the attention of our Indonesian counterparts because this is what they have been waiting for.”

At the same time, Sergio denied that she and Lacanilao were members of an international drug ring or were engaged in any crime. Presenting certifications from the police, the prosecutors’ office and courts in Nueva Ecija, she stated she has no pending criminal or civil cases.

According to Sergio, it was Veloso who approached her to borrow money so she could look for a job abroad. Sergio said she and Lacanilao were also set to leave for Malaysia to look for work, and that Veloso had wanted to come along.

Sergio said Lacanilao had volunteered to drop the trip so the two women could go to Malaysia with enough money. Sergio said she bought Veloso a ticket that was payable once the latter finds a job.

They left for Malaysia on April 21, 2010, Sergio said, adding that she went to the Malaysian she had been contacting for a job as a domestic, while also referring Veloso to a Filipino friend whose contract as a domestic was about to end.

While in a restaurant, Sergio said she and Veloso were befriended by two African-looking men named John and Ike. She was not interested, but Veloso kept in touch with the men, Sergio said.

Later, Sergio said Veloso told her that the men were hiring her to hand-carry bags to other countries. Sergio said she had warned Veloso about the men but Veloso allegedly said she was okay with John’s and Ike’s job offer, and that she had even called her family about finding a job.

Sergio said Veloso left their hotel early morning of April 25 and later called to tell her about the heavy luggage she was being asked to bring to Indonesia.

Sergio said she went job-hunting on her own, was unsuccessful, and returned to the Philippines on April 26.

She later dropped by the Veloso residence and was told that Veloso had called to tell them she was okay, Sergio said.

She then went to Bicol for her mother’s funeral, Sergio said. Upon returning to Nueva Ecija on May 10, Sergio said she was shocked to learn from Veloso’s family that Mary Jane was in jail because of the heroin found in her bag by airport authorities in Indonesia.

Sergio said Veloso’s family had blamed her for what happened despite her insistence that she never knew about Veloso’s trip to Indonesia. She longed to reach out to the Veloso family to tell them what really happened but they were angry at her, Sergio added.

Sergio said she and Lacanilao never threatened the Velosos to keep quiet on the matter, but that the Veloso family never reported them to the police or to authorities.

According to Sergio, she and Lacanilao were forced to seek police protection after being threatened by members of Veloso’s family as the day of Veloso’s execution approached. She added that they also received death threats through text messages.

In her affidavit, Sergio accused the National Bureau of Investigation and government prosecutors of violating her and Lacanilao’s human rights by portraying them as criminals in their effort to convince the Indonesian government to grant Veloso a reprieve.

If she and Lacanilao were really members of a drug syndicate, they would have had huge bank deposits that the authorities could have monitored, she added.

Sergio and Lacanilao also executed a waiver condemning media reports that they claimed had affected their reputation. They were not illegal recruiters, they insisted, since buying Veloso a plane ticket does not constitute illegal recruitment.

“We are not what you want to portray in public as evil persons because we are God-fearing and humane, and our only fault was help(ing) people who are ingrates,” the two said.

The preliminary investigation resumes on Monday next week when the complainants are expected to submit their rejoinders.