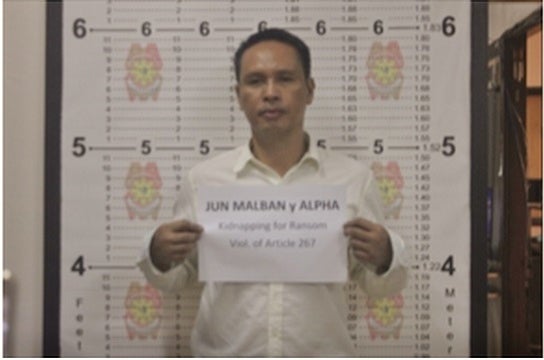 A former member of the Philippine National Police who allegedly negotiated for the Abu Sayyaf group during the release of their Australian captive in 2011 has been arrested in Kota Kinabalu, Malaysia.

PNP Anti-Kidnapping Group announced on Monday the arrest of SPO2 Jun Malban, a known relative of Abu Sayyaf leaders, for his involvement in the abduction of Warren Rodwell, who was held captive by the Abu Sayyaf Group in Ipil, Zamboanga, in December 2011.

Using the alias Michael Zue, Malban had acted as the negotiator and spokesperson for the ASG when Rodwell was released on March 23, 2013, Senior Superintendent Roberto Fajardo, PNP AKG acting director, said in a press briefing.

Malban was assigned at the Police Security and Protection Group of the PNP from 2005 to 2012.

Fajardo said he is a cousin of ASG leaders Khair and Borhan Mundos.

In June last year, the PNP Criminal Investigation and Detection Group arrested Khair in Paranaque City. Khair was tagged in several bomb attacks as he was allegedly the ASG’s financier and middleman for the group’s transaction with Al Qaeda terrorist network.

Five months after Khair’s arrest, Borhan, allegedly the ASG’s solicitor of foreign fund and armaments, was arrested at the Ninoy Aquino International Airport.

Fajardo said the joint operatives arrested Malban at the immigration office in Lahad Datu in Sabah after the Malaysian Police nabbed him on April 28 for violating the immigration law for illegal entry.

When Malban escaped and tried to seek refuge in Malaysia, the AKG director said Malban was with his Canadian wife Megan Collins.

Abus got only P4M from us, says wife