Building a home in Malaysia was not in his design plan but architect Manny Canlas couldn’t resist the pull of love.

“I came here for my wife and discovered work at the same time,” he tells INQUIRER.net while having breakfast at a restaurant just below the famous Petronas Twin Towers – among the many buildings in Kuala Lumpur he was fortunate enough to have worked on.

Manny, a graduate of the University of Santo Tomas (UST), has been living in Malaysia for 30 years. He calls himself “semi-retired” but is juggling his own design practice and lecture work at Taylor’s University in Kuala Lumpur. 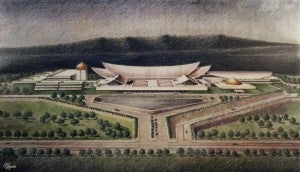 Rendering of Istana Nurul Iman, palace of the Sultan of Brunei. Image courtesy of Emmanuel Canlas.

He met his then-future wife, a Malaysian Chinese named Kristine, while working with national artist for architecture Leandro V. Locsin on a palace for the Sultan of Brunei. After the completion of Istana Nurul Iman, Manny visited Kristine and her family in Malaysia.

READ: Did you know…Leandro Locsin

Despite the uncertainty of his future there, he decided to stay and get married.

The risk paid off: he has a beautiful family and a flourishing career that involved designing some of the magnificent buildings in the sprawling city of Kuala Lumpur.

The humble architect says a lot of his achievements could be attributed to being in the right place at the right time. Much of what has happened to him, including being an architect, was not part of his plans.

Already good at drawing when he was a child, Manny wanted to become an artist.

“I went to UST with my Dad (to apply for their) Fine Arts (program),” he says. When he got there, however, he went to the wrong window.

“I went to (the window with) the shortest line,” he recalls, laughing. The university staff asked him if he wanted to apply for the Architecture program instead.

Discouraged by the long queue – “There were 30 people in line (for Fine Arts),” Manny says in mock horror – and pressured to make a split-second decision, he applied to study architecture.

His grandfather, who was a professor at the college, paid for his education. “(He was happy that) out of his 45 grandchildren, I chose to become an architect,” Manny says. “I was so thankful because my mother and father can’t really afford it. Architecture was so expensive.”

Despite his artistic inclination, Manny struggled during his first few years in the college. He had trouble with math, especially calculus.

“I was not really an ‘A’ student,” he says. “I was a late bloomer.” It was only after college that he found his footing.

After working as a draftsman for an Araneta-owned development corporation, he was recommended by a friend to Locsin.

At a young age, Manny became a member of Locsin’s architectural firm where he was immediately promoted as group leader architect. After designing buildings in Makati, he flew to Brunei with the rest of Locsin’s team for the construction of the sultan’s grand palace.

“Because of Locsin, I’m where I am now,” Manny says of the famous architect.

He says he stayed in Malaysia without a job offer or a plan but it was his experience with Locsin that made his employers trust him. 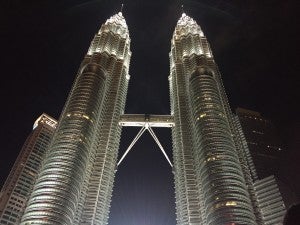 For several years, he designed condominiums and resort hotels in Malaysia and nearby countries.

It was in the 1990s that the company he worked for was commissioned by Petronas, a Malaysian government-owned oil and gas company. Manny led the local team that initially took care of the design plans of Cesar Pelli, an Argentine American architect known for designing some of the world’s tallest buildings and landmarks, for the Petronas Twin Towers.

Once the tallest building in the world, the Petronas Twin Towers is now considered a modern architectural icon in Malaysia.

READ: Malaysia: A delightful fusion of lifestyle and culture

Manny, however, is most proud of his work in Platinum Park, a mixed development site also within the Kuala Lumpur City Center enclave. Among the buildings he designed in that area are Naza Tower and Menara Felda. 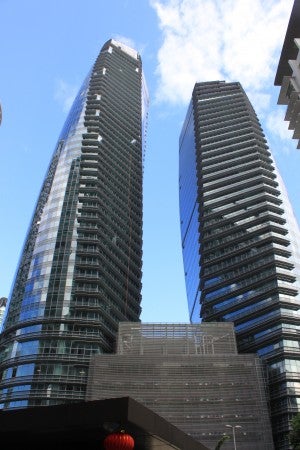 The Naza Tower, which features a pair of “twisted” buildings, won the Best Commercial High-Rise Development Award for the Asia Pacific region in the 2012-2013 International Property Awards.

“The company I worked with (RSP Architects Sdn Bhd) does not restrict itself to the basics. As you can see in the architecture,” he says as he gestures toward the Naza Tower, “a lot of modern technology has been introduced.”

Asked what sets him apart from other architects, he says, “I’ve always been vocal and straight to the point. When you have that confidence and you’re true to yourself, it will bring you anywhere.”

A gifted artist, Manny says people seem to like and understand his sketches. He says this was especially important during his early years, when most architectural designs were drafted by hand.

While working in Malaysia can be challenging, Filipino professionals are able to compete and prove their worth, Manny says.

READ: A taste of the Philippines in Kuala Lumpur

In 2008, he returned to RSP Architects as a senior associate to help hire talent and expand operations. When he left, the company’s workforce reached 200, from only 80 six years ago. A handful of the new hires were Filipinos.

“Now they were being recognized for their work. They’re proving themselves,” he says. “And we hear it directly from the management itself. Now the (RSP) management is asking my architects to hire more Filipinos back home.”

Despite living in Malaysia for decades, Manny has never forgotten where he came from.

Besides designing and teaching, he still finds time to preside over meetings of the United Architects of the Philippines (UAP) Kuala Lumpur chapter. As the president of the chapter, Manny hopes to improve the working conditions of his peers in Malaysia.

Right now, he is working with the Professional Regulatory Commission to arrange licensure exams for “underboard” Filipino architects or those without licenses.

Several years ago, he had the opportunity of bringing former President Fidel V. Ramos to the KL Tower, another iconic building in Kuala Lumpur. Ramos was inspired by the structure and asked Manny to design a similar one in Metro Manila. Unfortunately, the plans fell through.

Manny’s wish for the Philippines, however, is quite simple.

Asked if he still wants the country to have an iconic building similar to the Petronas Twin Towers or the KL Tower, he says, “(My dream is for the Philippines) to be progressive…I just want us (to regain) the respect (of other nations). I think it’s only a matter of time.” IDL