A taste of the Philippines in Kuala Lumpur

For a country with the fifth largest number of overseas Filipinos, Malaysia has yet to join the Philippine cuisine bandwagon.

While reinventions of adobo and other Filipino staples have been making waves in the United States – offered as both food truck attractions and gourmet dishes in full-service restaurants – Filipino food, in general, has yet to make a dent in countries like Malaysia where chili and spicy food seemingly reign.

In the affluent neighborhood of Damansara Heights in Kuala Lumpur, however, a small restaurant has been serving up merienda favorites such as fresh lumpia, pancit palabok, and halo-halo.

Eva Gurcharan-Gill’s homey Merienda de Eva has been delighting Malaysians for years. What started out as a hobby became a home-based cake business and later a full-fledged cafe. 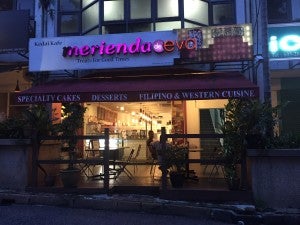 Although mostly promoted as a place where people can grab a snack (merienda means a treat eaten between meals), Merienda de Eva offers around 50 kinds of dishes. More than half are traditional “Pinoy meals,” which can be eaten with rice.

Eva says her customers visit her shop just to try their sizzling chicken sisig and kare-kare. Non-Filipinos are especially smitten with their fresh lumpia.

While most of her everyday customers are Malaysians, Eva’s restaurant is also a hit among her fellow Filipinos. She gets most of her Filipino customers during weekends and for years she has been catering for events organized by the Philippine Embassy in Kuala Lumpur.

“I do cater a lot at the Embassy and the ambassador (Eduardo Malaya) is very proud of introducing Filipino food (to his guests),” Eva says.

Eva left the Philippines in 1981 to live in Sabah with her husband, a pilot working for Malaysia Airlines. They met and married in Manila where he trained as a cadet. At that time, Eva was managing a hostel.

In 1986, her husband was promoted and they transferred to Kuala Lumpur, the capital and most populous city of Malaysia.

Although Eva spent most of her days taking care of their three children, the former career woman started looking for something else to do while her husband was away on long-haul flights.

“I was feeling bored. I wanted to do something [so] I started learning how to bake cakes,” she says.

As expected of someone who enjoyed cooking, Eva’s cakes were a hit among her friends. 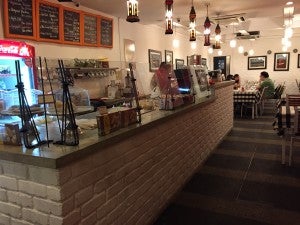 It was in 1992 when she started her home-based operation dubbed Sugar Cake Delight, which specialized in cakes and fine pastry. Later on, she opened “cake counters” at the Royal Selangor Club and the Lake Club. By 1997, she was able to open a small café called Summers Cake & Deli. Unfortunately, her cafe burned down three years later when it caught fire from a neighboring store.

It was almost a decade later when her daughter Shereen decided to start a business based on Eva’s cakes and Filipino recipes. Since then, the cafe has been doing pretty well.

Located at Jalan Medan Setia 2 in Plaza Damansara, Merienda de Eva attracts not only residents of Damansara Heights, which is comparable to Forbes Park in the Philippines, but also professionals working in the nearby offices.

Besides the usual latte, Merienda de Eva offers all sorts of desserts – from sansrival to halo-halo.

During INQUIRER.net’s visit to her charming café, Eva served caramel cheesecake, her own take on the comforting dessert. The cake’s dense layer of cheese, cream and eggs is topped with a delectable thin slice of leche flan, resulting in a dessert that looked like custard cake but with a more sophisticated taste.

Eva often had to experiment with her recipes, not only for innovation but also to adapt to the local tastes or to what is available in the market

Her bestseller fresh lumpia, for example, is made from singkamas (turnip) instead of ubod (heart of coconut palm). On the other hand, every time she visits the Philippines, she stocks up on gabi (taro) leaves for her laing. Eva says she freezes the leaves to keep them fresh.

With Philippine cuisine featuring a lot of meat, Merienda de Eva is not considered a halal restaurant or an establishment offering food permissible under Islamic law. However, it does not serve pork, which is prohibited in Islam. 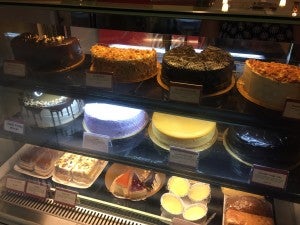 “I want to promote my cakes. Once I serve pork, I might lose Malaysian customers,” she says, explaining that Muslims won’t consider eating dessert prepared by an establishment offering pork.

This is why she uses either chicken or beef. Her sisig, adobo and afritada are made from chicken while her kaldereta and bacon (for her pasta dishes) are made from beef.

Meat lovers, however, should not worry about the lack of pork. The beef bacon used for the carbonara is as crispy and flavorful as that of pork.

For her Malaysian customers who prefer spicy dishes, there’s laing and sizzling sisig. Eva also decided to add chili to her adobo and pancit palabok.

“The Filipinos here ask, ‘How come the adobo here is hot?’” she says in jest. Despite (and maybe because of) the “modifications” in her recipes, both Filipinos and Malaysians keep coming back to her restaurant.

Perhaps it is Eva’s familiarity and sensitivity to local tastes that makes Merienda de Eva successful.

Asked what her secret was in keeping her business thriving, she says, “To have a business you have to work hard. It’s not easy.”

Eva says working hard is a requirement in every business and in every endeavor.

She says it is probably the reason why Filipinos get a lot of work in Malaysia. “[We’re] very hardworking. We are known for that.”

This is also why her staff members are mostly Filipinos (her manager is Malaysian).

“They are very dedicated,” she says of her staff. Some of them worked at her old cafe and even returned to Malaysia when Merienda de Eva was unveiled.

In a way, Merienda de Eva has been the “ambassador” of Filipino food in Kuala Lumpur for the last six years.

“I’m really proud,” Eva says of this accomplishment. Although her finances are limited right now, she hopes to open other outlets or start a franchise in the future.

As the interview winds down, the ever approachable and accommodating Eva excuses herself to chat with a Malaysian Chinese family. The children were enjoying slices of cake.

“We’ve been here before,” the mother tells Eva. “But only for the cakes.” That night they decided to try the other dishes.

The mother smiles and tells Eva that the food was delicious. “Are you the owner?” they ask. Eva smiles in appreciation of the compliment. The woman’s daughter, a preteen, gushes over the Filipino food.

Before leaving the cafe, one of her servers hands over a food container with their famous fresh lumpia. Good food, hard work and hospitality—definitely among the main reasons why people keep coming back to Merienda de Eva.