First-ever Filipina town and borough Councillor elected in the UK 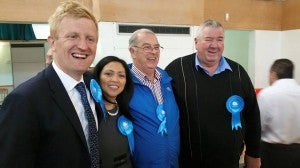 Filipina-British Cynthia Barker with new Conservative MP Oliver Downden and co-councillors after elections on May 8. PHOTO BY GENE ALCANTARA

LONDON — Cynthia Barker, a Filipino-British who hails from San Pablo City in Laguna, has made history in the United Kingdom after being elected Hertfordshire’s first ever Filipino councillor in the national elections that took place last Friday, May 8.

Barker ran to become Town Councillor for Elstree and Borehamwood and Borough Councillor for Potter’s Bar Furzefield under the Conservative Party, colloquially known as the Tories. Barker was elected for both local positions.

The UK’s Prime Minister David Cameron also belongs to the Conservatives, who held onto their national political power this year by a comfortable majority.

Barker first moved to the UK in the mid ‘80s to join her family. Her mother was the first to arrive in the ‘70s as an OFW.

“[My mother] will always be my hero,” said Barker. “She made the same sacrifice that most OFWs make, sending all her money home while she worked long hours to ensure that her family was well-fed and educated. We now have four generations of family in the UK.” 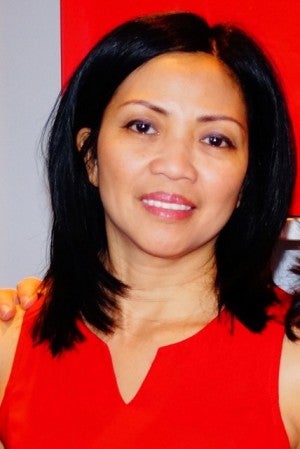 In 2005, as a registered immigration adviser, Barker published the book How 2 Come to the UK with her business partner, Elstree and Borehamwood Councillor Charles Kelly, who was previously the local mayor.

On adjusting to British life, Barker stated: “I feel blessed that I came to the UK strong and armed with Filipino values instilled in me by my parents. Those gave me the strength to adapt to the new environment.”

She added, “I was quite insular before and I only went out with fellow Filipinos. This gradually changed as I continued my studies here. [I] realized we are all the same, people wanting to protect our country by becoming involved with our local community.”

Speaking on her decision to join the Conservative Party, Barker stated: “I’ve always supported the party’s campaigns in the past before I even became a full member. Because of my track record in community involvement, I got selected to run [in the elections].”

Following her successful double results in the national elections, Barker was “shocked” and humbled. She expressed her gratitude to the locals: “I am really humbled to have been selected by the residents. I never imagined I would be standing here. I am looking forward to the challenges and working with the residents.”

Barker now hopes that her new position will positively impact the UK’s Filipino community, which remained fairly hidden in the country until recent years.

“I hope that [my involvement] will inspire other Filipinos to get involved in politics,” said Barker in an interview. “It is important to be a part of the political machinery – the British are open and they embrace us. But we Filipinos need to make the first step and adapt.”