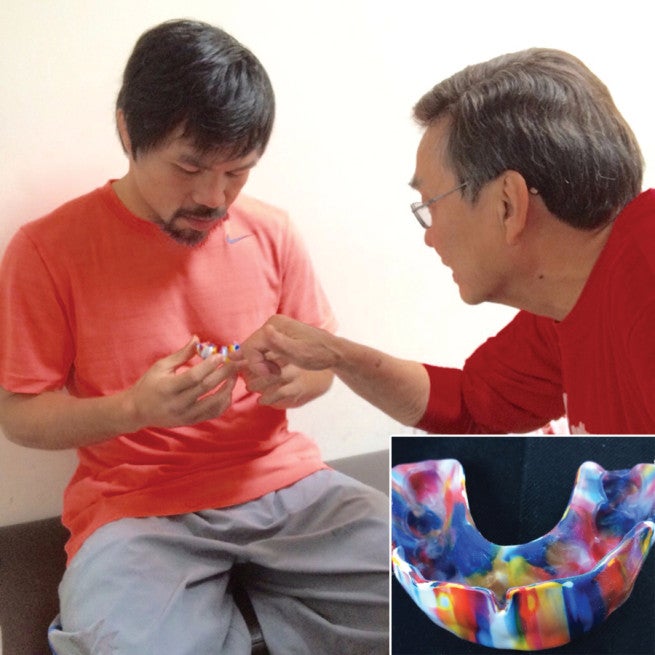 on Saturday, May 2, he’ll be flashing

a multicolored mouth guard with the colors of the Philippine flag

“[Manny] wanted me to make something that would represent the country

, as he told me he’s fighting for the Filipinos,” said Dr. Ed de la Vega

, a Las Vegas-based Filipino dentist who has worked with the boxing champion since he fought Erik Morales in 2006.

“So the best way

said in an exclusive interview with the Asian Journal.

Pacquiao’s mouthpiece for The Fight of the Century incorporates the four colors of the Philippine flag: red; white; blue; yellow. The hues are blended together rather than separated, to symbolize the various ethnicities supporting him on May 2, de la Vega said.

The Filipino dentist visited Pacquiao about two to three weeks ago, took the fighter’s dental impressions and spent about three hours making the multicolored piece. He also took into account

the boxer’s needs and history

. The mouth guard was made special

for the boxer who, de la Vega said, has no problems with his teeth.

“All [the] mouthpieces he’s used are designed basically the same because he has the best teeth among all the boxers I’ve seen. He doesn’t have a missing tooth, he doesn’t have a filling,” he said.

Made with ethyl vinyl acetate, the tough and flexible mouth guard is lightweight, and de la Vega guarantees it will properly protect Pacquiao while he battles Mayweather in the ring.

“The secret to mouth guards is really how they are fitted to the mouth of the athlete. I don’t just give the mouth guard to any boxer. I fit them and make sure extensions are OK, that there’s enough room

to move around, and also [that] the bite is perfect so it will help reduce the occurrence of fracture,” he said.

De la Vega himself does the fitting for mouthpieces. He makes and manufactures them in-house and said only he touches them before they get to the hands of the athlete. When designing a mouth guard, he also keeps in mind that the device should never come out during the fight, and that the athlete should be able to speak and breathe while wearing it.

Like Pacquiao, Mayweather will also be using a customized mouth guard during the May 2 bout. Reports

earlier this month indicated that the undefeated boxer would be protecting his mouth with a piece worth $25,000 and one containing real $100 bills inside.

that the material of Mayweather’s piece is “a closely guarded secret” and that the fighter did not remove his mouth guard during his fight against Cotto.

Dr. Lee Gause, who has been working with Mayweather since his fight against Miguel Cotto in 2012, told the Daily News

that the reason Mayweather, along with other athletes (such as Spurs guard Danny Green and Browns wide receiver Josh Gordon), like his mouth guards is because it helps them breathe better.

De la Vega, however, is not a fan of including inserts

in the protective pieces.

“The mouth guard is a simple device that is designed to protect him,” de la Vega said. “I never have [used] those inserts

because when I design the mouth guard, I think about the safety of the athlete, not to show off.”

for Pacquiao’s Philippine-inspired mouthpiece is at $500, but de la Vega said he has never charged the Filipino boxer for them.

“It’s my little way of showing

. I believe that much warrants him a free