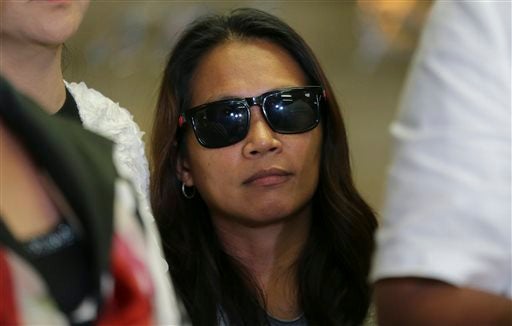 Maria Kristina Sergio, the alleged recruiter of convicted Filipino drug trafficker Mary Jane Veloso who allegedly gave her the bag that contained the heroin found by police at Yogyakarta airport in Indonesia, is a frequent traveler, according to state investigators. AP PHOTO/AARON FAVILA

But Sergio’s airline and immigration records do not match, one of the investigators, who requested anonymity, said.

The source said Sergio, who has been traveling since 2009, traveled on certain dates seemingly without the knowledge of the Bureau of Immigration (BI).

“The BI and the airline records did not match. There were dates Christine was supposed to have left the country based on airline records but her passport did not bear any stamp that she left,” the source said.

The airline records also showed that Sergio and Veloso left the Philippines together on April 21, 2010, bound for Malaysia.

Veloso, in her statement to agents from the Philippine Drug Enforcement Agency (PDEA) who interviewed her in Wirogunan Prison in Yogyakarta, Indonesia, in March, said it was Sergio who took her to Malaysia in April 2010 to arrange a maid’s job for her there.

In Malaysia, while waiting for her prospective employer, she said Sergio planned a trip to Indonesia to meet someone. Later, Sergio said she could not make the trip and asked her to go instead.

That was when she met Sergio’s live-in partner, Julius Lacanilao, and his friend, an African she identified only as Ike.

Veloso said Ike gave her a bag in which to carry her clothes on her trip to Indonesia and Sergio gave her a number to call a person who would meet her at the airport.

But at the airport in Yogyakarta, authorities found 2.6 kilograms of heroin hidden in the bag. Veloso was arrested and tried on charges of drug trafficking. On Oct. 20, 2010, she was convicted and sentenced to death.

Her case and those of nine other drug convicts scheduled for execution by firing squad on April 29, drew international attention—and still unclear problems for Sergio, who turned herself in to authorities on Monday seeking protective custody from the Philippine National Police.

A last-ditch effort by President Aquino, boosted by the investigation of Sergio for suspected involvement with an international drug syndicate, won for Veloso a reprieve early on Wednesday.

She was taken out of the maximum-security island prison of Nusakambangan and returned to her cell in the Yogyakarta prison, where Philippine authorities may visit her soon to get her testimony against Sergio.

The National Bureau of Investigation has filed illegal recruitment, human trafficking and fraud charges against Sergio and Lacanilao in the Department of Justice, which has ordered them to appear for their preliminary investigation on May 8 and 14.

On Wednesday night, the PNP took the couple under protective custody, as they claimed they had received threats to their lives.

Justice Secretary Leila de Lima said Thursday that she had given orders to the NBI to look into reports that Sergio had two other victims.

The PNP is looking into the possibility that the West African Drug Syndicate is the group involved in Veloso’s predicament.

Senior Supt. Bartolome Tobias, the new spokesman for the PNP, said Thursday that the syndicate was the only group that used “drug mules” or couriers to transport illegal drugs to other countries.

According to the task force, the syndicate lures Filipinos to transport drugs for a fee of $500 (P22,000), depending on the amount of the drugs to be transported.

“The transactions are conducted outside the country but the recruitment is done here in the Philippines,” Suan said.

Operating exactly as Veloso described her arrangement with Sergio, the syndicate’s local contacts entice mostly poor Filipinos with overseas job offers and the gullible ones are taken to another country where they are given suitcases in which drugs are hidden without their knowledge, Suan said.

Tobias declined to tell reporters where Sergio and Lacanilao were, saying disclosure of their whereabouts and activities could jeopardize the investigation.

“This is a life and death situation. We should be cautious so that’s why we cannot divulge other information,” Tobias said.

He said that since the West African Drug Syndicate might be involved, the security and crime situation not only in the Philippines but also in the entire Asia-Pacific region is involved.

“We shouldn’t be too simplistic about the cases of Veloso and Sergio,” he said.

He said, however, that family members and friends had visited Sergio.

No to int’l court

De Lima ruled out the elevation of Veloso’s case to an international tribunal, which University of the Philippines law professor Harry Roque had proposed.

“Not yet. I mean let’s not talk about this first because the important thing here is that we have been emphasizing to the Indonesian authorities that we respect their laws and their legal processes,” De Lima said.

She said leaving Veloso’s case a matter between the Philippines and Indonesia would also show mutual trust between the two countries.

De Lima also clarified that Veloso was given just a reprieve and that her death sentence remained.

The reprieve is “a diplomatic and political act” by Indonesia, she said.

De Lima said she could not tell what happens to Veloso’s case if charges are brought against Sergio and Lacanilao.

“The case [of Veloso] has been decided by the Indonesian court with finality. That’s why her second appeal was rejected. On the legal and judicial [fronts], I really don’t know if there’s still an open avenue or remedy for the main case for which she was convicted and sentenced to death,” De Lima said.

“Mary Jane is claiming she is the victim. It would appear that there are elements of human trafficking and illegal recruitment. If this is verified, this can help her, I think,” she said.

De Lima, however, did not rule out Indonesian President Joko Widodo extending other forms of executive clemency to Veloso.

“It may not be total absolution, it can be a pardon or commutation, although we are not going there yet. Let’s prioritize [the preliminary investigation]. The Indonesian government allowed a reprieve because they respect our legal processes, that’s why we have to inform them about the NBI complaint. There was a supervening event—the surrender of the recruiter. And the Indonesians respect [the] pending process that might impact the current predicament of Mary Jane,” she said.