Indonesia: Reprieve due to Aquino plea; credit-grabbing in full swing 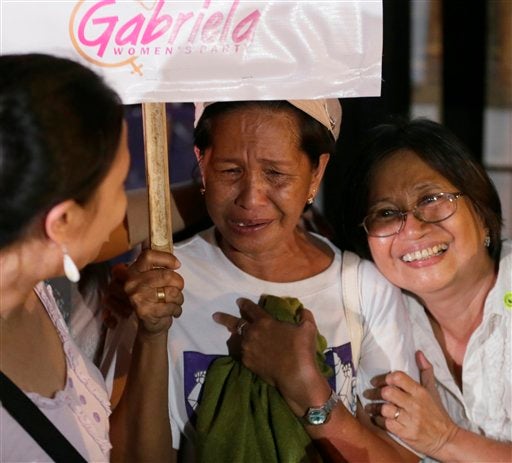 Protesters, who kept vigil at the Indonesian Embassy in the financial district of Makati city east of Manila, Philippines, celebrate following an announcement of the delay of the execution of convicted Filipino drug trafficker Mary Jane Veloso in Indonesia, before dawn Wednesday, April 29, 2015. AP PHOTO/BULLIT MARQUEZ

Mary Jane Veloso got a reprieve from facing a firing squad on an Indonesian prison island upon the intervention of President Aquino to allow her to testify against her godsister who allegedly made her a drug mule, Indonesia announced on Wednesday.

Indonesian Attorney General Muhammad Prasetyo stressed that the stay of Veloso’s midnight execution was only a “postponement” to allow time for police investigations in connection with the human trafficking case against Maria Kristina Sergio, who allegedly recruited the condemned Filipino.

“We are fighting a war against horrible drug crimes that threaten our nation’s survival. I would like to say that an execution is not a pleasant thing. It is not a fun job,” Prasetyo told reporters early Wednesay in Cilacap, the gateway to the Indonesian prison island of Nusakambangan, hours after eight convicts were gunned down by firing squads.

“But we must do it in order to save the nation from the danger of drugs. We are not making enemies of countries from where those executed came,” Prasetyo said, referring specifically to Australia, which swiftly recalled its ambassador in Indonesia, as a show of indignation for the execution of two Australians.

“What we are fighting against is drug-related crimes,” he said.

Tony Spontana, the Indonesian attorney general’s spokesman, said Veloso’s execution had simply been “postponed due to the request of the Philippine president in relation to an alleged human trafficker who recently gave herself up in the Philippines.”

Spontana explained that the Philippine government had said Veloso was needed to testify against the 47-year-old Sergio, Veloso’s godsister who went to police authorities on Tuesday to seek protection claiming that she had been receiving death threats.

An Indonesian lawmaker, Masinton Pasaribu, said Veloso should not be allowed to return to the Philippines to testify against Sergio. He said the Indonesian government must not disregard the crime she had committed on Indonesian soil.

Veloso, a 30-year-old mother of two boys, claimed she was duped into carrying 2.6 kilos of heroin stuffed in the lining of her bag. She was arrested in Indonesia in April 2010 and was subsequently sentenced to death.

Indonesian President Joko Widodo reaffirmed Wednesay that the government had postponed Veloso’s execution because of new evidence in the Sergio case.

“There’s a letter from the Philippines [explaining about] human trafficking. It is a postponement [of the execution], not an annulment,” he said on Wednesday.

Not a last-minute move

But Widodo himself denied the decision was influenced by the Philippine government via a telephone conversation minutes before the planned execution, and said he had discussed the issue with President Aquino on the sidelines of the Asean Summit in Kuala Lumpur on Sunday.

“But we must do it in order to save the nation from the danger of drugs. We are not making enemies of countries from where those executed came. What we are fighting against is drug-related crimes.”

Amid the jubilation in the Philippines were the usual patronizing statements and brickbats.

“It’s such a wonderful feeling to be able to save a life just in the nick of time. At the moment it is just a temporary reprieve, but hope springs eternal,” De Lima said in a press conference.

“It’s not only the drug mules who should be penalized. More importantly, all the more the drug syndicates should be tracked down and rounded up. So we hope we to get more information from either or both Mary Jane and the alleged recruiter,” De Lima said.

Vice President Jejomar Binay on Wednesday welcomed Veloso’s good fortune and thanked everyone but President Aquino. He thanked Widodo and Indonesian Vice President Jusuf Kalla for “listening with sympathy to my appeal during our official and unofficial encounters in Jakarta.”

“There were different approaches but only one unifying effort: prayers … Reprieve could mean postponement, it could mean the sentence is reduced to life imprisonment, or it could mean absolution… Let us continue our prayers to save the life of Mary Jane,” Binay said.

Former Sen. Panfilo Lacson, who may well be Binay’s rival in the 2016 presidential race, said the nation “must laud and recognize the efforts of (the President) that led to this positive development.”

Speaker Feliciano Belmonte Jr. said in a text message: “At the end of the day, it was P-Noy who did it. Not the poseurs, know-it-alls, etc. Kudos to P-Noy.”

Bayan Muna Rep. Neri Colmenares said: “The obvious neglect of government for five years to promptly provide competent lawyers and other legal services brought Mary Jane to the brink of execution must be put into account and corrected to save 88 Filipinos now on death rows and migrants facing legal woes.”

Bagong Alyansang Makabayan secretary general Renato Reyes Jr. said: “It was the broad movement and sustained appeal which were decisive in pressuring both the Widodo and Aquino governments to act on Veloso’s case.”

The human rights group Karapatan said: “Aquino has no moral authority to claim this victory as his. We maintain that the inept leadership of Aquino has put Mary Jane’s life on the line. Aquino is responsible for the diaspora of thousands of Filipinos who would rather risk their lives in other countries than stay home and die of hunger.”

The migrants’ group Migrante International maintained the government did “too little, too late for Mary Jane.”

“If not for national and international pressure and censure, Aquino would not have been compelled to take urgent action. Right to the end, Aquino had the gall to put on a stoic face and declare, when asked why his last-minute suggestion of turning Mary Jane into a witness against big drug rings came up just now, that ‘details of the case came to light only in the last few days’ and that Mary Jane ‘did not cooperate at first.’ Lies upon lies upon lies to the end, nothing could be farther from the truth. Because of government neglect and passivity, Aquino had placed Mary Jane on the brink of death,” Migrante said in a statement.

Protesters who had been keeping vigil outside the Indonesian Embassy in Makati City wept with joy, hugged each other and raised clenched fists in the air after hearing news of the reprieve.

“We are glad that the execution of Mary Jane Veloso was delayed. This is a victory of the unity and collective action of the Filipino workers and people, and of the international community,” said Lito Ustarez, vice chair of the Kilusang Mayo Uno.

Ustarez urged the nation to continue praying for the commutation of Veloso’s death sentence.

Migrante International said it could feel the triumph of Veloso’s family and it rejoiced with them.

“We said that only the people can save Mary Jane. We fought the good fight, we would like to think the best fight that we [had] ever waged, and because of this we have prevailed,” the group said in a statement.–With reports from Jakarta Post, AFP, DJ Yap, Christine O. Avendaño, Jerome Aning, Jaymee T. Gamil and Maricar Brizuela