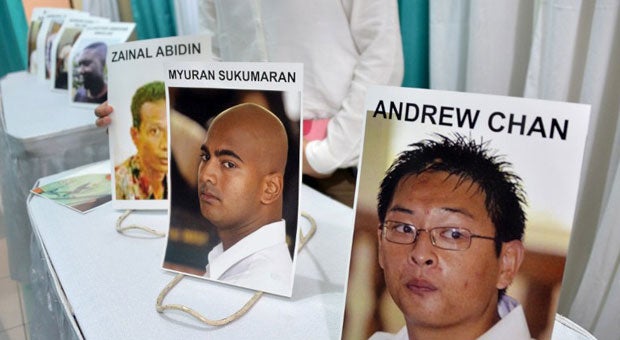 Photographs of executed drug convicts are displayed at the hospital morgue in Jakarta on Wednesday, April 29, 2015, as part of a prayer. Indonesia on April 29 staunchly defended its execution of seven foreigners including two Australians as a vital front of its “war” on drugs as testimony emerged of how they went singing to their deaths. AFP PHOTO/BAY ISMOYO

CILACAP, Indonesia—As they walked to face the firing squad on an Indonesian prison island, eight condemned drug traffickers defiantly sang praises to God, witnesses said, while in a town across the water a group of tearful supporters was also uniting in song.

The convicts—two from Australia, one from Brazil, four from Africa and one Indonesian—made the long journey from their prison to clearings on a prison island to meet their fate early Wednesday.

But rather than bow their heads in defeat and resignation, the convicts all reportedly refused blindfolds and raised their voices in song, including a rendition of “Amazing Grace,” until the gunfire from the firing squads rang out.

The husband of Pastor Christie Buckingham, who gave spiritual guidance to one of the Australians in his final moments, said his wife told him the men conducted themselves with “dignity and strength until the end.”

“She told me the eight of them walked out onto the killing field singing songs of praise,” Rob Buckingham told 3AW radio in Australia.

Across the water in the town of Cilacap, the final crossing point for inmates destined for death on the high-security Nusakambangan island, a small band of mourners held a candlelight vigil, and also sang “Amazing Grace.”

The haunting sounds filled the night sky, drowning out the sobs of those too distressed to contemplate what was taking place in the jungle-clad hills of the prison island.

One man wailed loudly and implored Indonesian President Joko Widodo to have mercy. Another supporter read out the names of each inmate one by one.

Owen Pomana, a former convict turned pastor and friend of Australian convicts Andrew Chan and Myuran Sukumaran, tried to buoy the spirits of those dwelling on the fate of the prisoners.

“Fear not, they have nothing to fear!” he declared of the condemned inmates.

Moments later, the eight inmates were dead, executed by 12-man firing squads after being tied to posts.

Just before dawn, their bodies returned from the island in coffins, some covered in embroidery.

Family members could be seen crying, ushered away by friends and supporters to begin the long journey to bury their loved ones.

Angelita Muxfeldt, the cousin of Brazilian inmate Rodrigo Gularte, wept as she was led through the large throng of onlookers by Fr. Charlie Burrows.

But others shed tears of joy. The family and friends of Filipino convict Mary Jane Veloso—who was moments away from being executed with the others only to be granted a reprieve—rushed to the port to embrace and express their disbelief.

Fr. Harold Toledano, a Filipino priest assisting the Veloso family throughout their plight, had been praying when he heard the good news.

“This is a miracle for us,” he cried, as Veloso’s lawyers and supporters celebrated. “It’s like a resurrection for us. She is alive.”

For the Chan and Sukumaran families, there was no such solace. They had lost their sons, their brothers, after begging for their lives to be spared at every possible opportunity.

“They asked for mercy, but there was none,” the family said in a statement after the executions.

They will bury their loved ones soon, but won’t be the first.

Barely had the dust settled at Cilacap port when Zainal Abidin—the sole Indonesian prisoner among the group—was laid to rest at a nearby graveyard.

Australia withdrew its ambassador in protest of the midnight executions, but the Indonesian president said he was merely applying “the rule of law” against narcotics traffickers.

Brazil expressed “deep regret” at the execution of its national, whose family says is mentally ill, and said it was weighing its next move.

Indonesian Attorney General Muhammad Prasetyo played down Australia’s decision to recall its ambassador, describing it as a “temporary reaction,” while Foreign Minister Retno Marsudi stressed Jakarta’s desire to “continue having good relations” with one of its most important trading partners.

Not business as usual

Australia had mounted a sustained campaign to save its citizens, who have been on death row for almost a decade, and Prime Minister Tony Abbott said the executions were “both cruel and unnecessary.”

“We respect Indonesia’s sovereignty but we do deplore what’s been done and this cannot be simply business as usual,” he said, announcing Australia’s unprecedented step of recalling its Jakarta ambassador.

Chan and Sukumaran, the Australian ringleaders of the so-called “Bali Nine” heroin-trafficking gang, were described by Canberra as reformed men after years in prison.

The families said their sons did “all they could to make amends, helping many others” in the years since their arrests, with Sukumaran teaching fellow inmates English and art, and Chan ordained as a minister in February.

“They asked for mercy, but there was none. They were immensely grateful for all the support they received. We too, will be forever grateful,” the families said in a joint statement.

Little is known about the other four foreigners executed. Three of them are from Nigeria but it is not clear whether the fourth held Ghanaian or Nigerian nationality.

The 10 death-row inmates and their stories