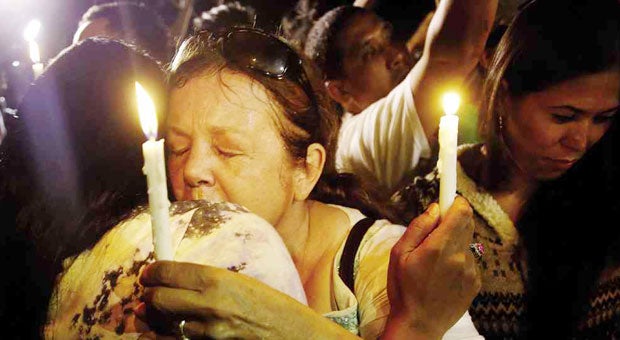 LIGHT IN DARKNESS People hold aloft candles during a prayer vigil for the death-row prisoners at the Wijayapura port in Cilaca, Indonesia, early Wednesday. Despite last-minute appeals from the international community, Indonesia executed eight men convicted of drug smuggling a little past midnight of April 29, but spared the life of Mary Jane Veloso. AP

MANILA, Philippines–All signs were leading to the midnight execution of Mary Jane Veloso in Indonesia on Tuesday when something happened.

“Yes, it’s a miracle,” Communications Secretary Herminio Coloma Jr. said on Wednesday, agreeing with many Filipinos that the stay of the execution of Veloso was an act of God.

The last-minute reprieve for Veloso, who was facing execution by firing squad in Indonesia for drug trafficking, sparked an outpouring of euphoria and disbelief on Wednesday, with crowds of supporters weeping with joy.

Coloma told the Inquirer that the Palace “acknowledge[d] the power of prayers and the vigil held for the cause of saving her life.”

Malacañang thanked Indonesian President Joko Widodo for considering the Philippine government’s appeal to save the life of Veloso.

Veloso has always maintained that an international human trafficking and drug gang had tricked her into bringing 2.6 kilograms of heroin to Indonesia from Malaysia five years ago.

She was granted an 11th-hour stay of execution after the suspected recruiter who took her to Malaysia, Maria Kristina Sergio, unexpectedly showed up in the police station of Cabanatuan City, Nueva Ecija province, on Tuesday, seeking protective custody.

The government relayed the information to Indonesia, offering Veloso as a witness against drug rings operating in Indonesia.

Justice Secretary Leila de Lima said she advised the President that the “best tack” at the time was to “target” a reprieve by informing the Indonesian government about the case filed by the National Bureau of Investigation against Veloso’s alleged recruiters and that if Veloso was put to death, the case would not be perpetuated.

“We invoked the Asean MLAT (Mutual Legal Assistance Treaty) so that we can get more information and further testimony from Mary Jane herself and also from Malaysia where the traveling bag with the stash of heroin was given to her. Through the MLAT, we can also seek help from Malaysia so that our investigators get additional evidence in support of the allegations of Mary Jane,” De Lima said.

Once Veloso’s account was validated through additional evidence, she said, it could be used by the government to get her further legal remedy under Indonesian law and save her from execution.

She disclosed that she wrote the Indonesian attorney general and the minister of justice and human rights past 5 p.m. on Tuesday.

“I can’t share the letter yet but in that letter I invoked the MLAT, and under the MLAT, just like in extradition treaties, these matters are confidential,” she said.

The secretary declined to elaborate on the “exact efforts” undertaken by the government to save Veloso, since the matter was a “sensitive” one and she had to consult the Department of Foreign Affairs on what to tell the public. “We did all that we could do in less than a 24-hour time limit. It was a coordinated, collaborative and determined effort on the part of the DFA, DOJ and the President,” she said.

De Lima also recounted that the DFA also did “many things” toward midnight, saying, “We were racing and running against time literally. We literally burned the midnight oil. Imagine, the last step that we did, it was past midnight and the execution was set for 2 a.m. Philippine time,” De Lima said.

The Asean MLAT, she explained, provides terms on how to further access and make Veloso available for the purposes of the preliminary investigation and the eventual trial of the NBI case.

“She is the complaining witness, the principal witness, so to speak. [The case is] based on her personal knowledge,” De Lima added.

The MLAT also provides for cooperation between Asean countries such as Indonesia and the Philippines in the battle against transnational and cross-border crimes like drug trafficking.

“It’s not only the drug mules who should be penalized. More importantly, the drug syndicates should be tracked down and rounded up. So we hope to get more information from either or both Mary Jane and the alleged recruiter,” De Lima added.

Indonesia had rejected a second appeal for Veloso even after President Aquino raised the matter with Widodo at the 26th Association of Southeast Asian Nations (Asean) summit in Kuala Lumpur, Malaysia, on Tuesday morning.

Widodo reaffirmed Wednesday that the Indonesian government had postponed the execution of Veloso due to new evidence to be presented in a Philippine court.

“There’s a letter from the Philippines [explaining about] human trafficking. It is a postponement [of the execution], not an annulment,” Widodo said.

In Cilacap, the port city that is the gateway to the Indonesian island prison of Nusakambangan where Veloso had been held, her children shouted for joy when they heard the news, according to their grandmother, Celia.

“Miracles do happen,” Celia, Veloso’s mother, told a Manila radio station from Cilacap after receiving news of the reprieve.

Veloso’s sons—Mark Daniel, 12, and Mark Darren, 6—who went to Indonesia with their grandparents last week to say goodbye to their mother, were overjoyed and yelled: “Yes, yes! Mama will live!” according to Celia.

“We are so happy. We can’t contain our happiness,” Celia told the Inquirer in a telephone interview from Indonesia.

“I will hug her tightly and give her kisses. That is all we can give her,” she said.

“What she said was true: ‘If God wants me to live, and at the last minute, I will live,’” Celia said.

“We all got a new lease on life. We will celebrate this,” she added.

She said the family would bring good food, including the family’s favorite, fried chicken, to Veloso when they are allowed to visit her in jail on Thursday.

“It was a pleasant surprise,” Charles Jose, spokesman for the Department of Foreign Affairs, told reporters on Wednesday.

He said all indications showed that legal and diplomatic efforts to save Veloso had failed, including the personal appeal by President Aquino to Widodo.

“It was a last-minute decision. Until after the emergency Cabinet meeting [called by President Widodo], the attorney general of Indonesia [was saying] the execution would push through,” Jose said.

“There was no hint that [the execution would be stayed],” he said.

Jose could not confirm, however, whether it was President Aquino’s last-minute phone call to Widodo, as reported by international media, that did it.

“The President had undertaken all avenues, including diplomatic and legal means, to do what he can for Mary Jane. The President believes that every human life is invaluable,” Del Rosario said.

“That means that she is no longer [on] the execution island. She was accompanied by the prosecutor and Fr. Kaiser (Veloso’s spiritual adviser),” Almendras told Palace reporters.

Rejoicing as a nation

“Mary Jane is back in her cell. She is attended to… And the biggest question of everybody. Where are we now? Now we need to act and prove the case that we have presented, that she was a victim of human and drug trafficking,” he said.

According to Almendras, “it’s not important as to who gets credit for this.”

“I think as a nation, we are celebrating the fact that Mary Jane is alive. Beyond that, I think we are also all in a position to help, which is if you know something, this is a good time to come out and talk because this is how we can help us from preventing (Veloso’s ordeal) from happening again,” he said.

“This is the time that we can prove to the Indonesians that [our desire to cooperate] with them to solve the drug problem and to finally get at these syndicates that are operating [is real],” he added.

Quoting President Aquino’s remarks during a press briefing in Langkawi, Malaysia, he said: “Why execute just one [drug] mule? Why not try to go for the big fish to hit a bigger organization that’s doing this?”

“On a personal note, let’s help the [Department of Justice] in the case buildup and [in] making sure that all the information and all the pertinent witnesses will come out to make sure that we follow through on this,” Almendras said.

Almendras had no answer when asked when Veloso’s execution would take place, but said, “Our priority is that it does not happen soon.”

Almendras said Justice Secretary Leila de Lima had scheduled a preliminary investigation on the human trafficking charge against Sergio for May 8 and 14.

Almendras said De Lima had expressed willingness to fly to Indonesia to share the findings with Veloso’s lawyers and with the Indonesian attorney general.–With reports from Niña P. Calleja, Nancy C. Carvajal, AFP and The Jakarta Post/Asia News Network