Alleged Mary Jane Veloso recruiter: I was just helping her 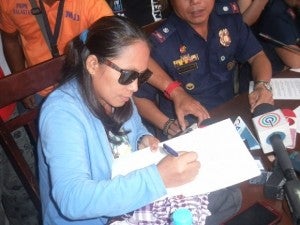 (I was concerned about her. I would never put her in harm’s way. My conscience couldn’t bear it if I harmed my own countryman.)

Sergio turned herself in to authorities Tuesday, claiming threats against her life. This latest development was reported to have been one of the reasons why Veloso got a temporary reprieve.

Denying that she was a recruiter, Sergio recounted that it was Veloso and her husband who personally went to see her and her live-in partner to ask for help so she could work abroad again.

(They even offered to pawn their own tricycle, but my (common law) husband refused so they could still have another source of income because her husband didn’t have a job.)

Sergio said her live-in partner, Julius Lacanilao, is the godbrother of Veloso’s husband.

With the consent of Lacanilao, Sergio said that she agreed to take Veloso to Malaysia with her, pay for her airline ticket, lend her money and pay for their hotel and food expenses in Malaysia.

She, however, clarified that she only lent Veloso P10,000 in cash, among others, and not US$500 as what her family said she said.

Sergio narrated that while in Malaysia, Veloso would make her own transactions and was always on the phone.

Sergio said that she did not quiz Veloso about her transactions, but advised her not to give her family false hope and not to trust strangers in Malaysia.

She also denied shopping clothes for Veloso and giving her a luggage, which the convicted drug courier said was too heavy.

Sergio said that she was just surprised when Veloso left her at the hotel.

(When she left, I didn’t know if she was already carrying a suitcase. She just called me and told me that she was already at the airport and was going to Singapore. I asked her why she left me, but she brushed me off and instead told me to just take care of her family.)

Veloso would instead fly to Indonesia where airport authorities discovered a stash of heroin hidden in her luggage.