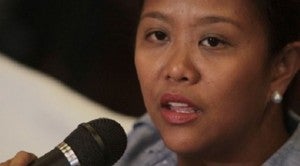 The case of Mary Jane Veloso is a “painful reminder” of the need to intensify the country’s measures against human trafficking, Senator Nancy Binay said on Wednesday.

Binay noted that Veloso was just one of over 70 Filipinos languishing in death row abroad.

“Sana ay papanagutin ng ating pamahalaan ang tunay na may sala upang wala nang matulad kay Mary Jane (the government should go after those who are truly at fault to prevent other people from suffering the same fate as Mary Jane’s),” she said in a statement.

Veloso, who was sentenced to death for drug trafficking, was spared from execution after a woman who allegedly recruited her to act as a courier gave herself up to authorities Tuesday.

Binay described as miracle the temporary reprieve granted to Veloso by the Indonesian government.

“Today, we can breathe a sigh of relief as our kababayan Mary Jane Veloso has been spared from execution in Indonesia. Sadya pong napakalakas ng pananampalataya ng sambayanan para sa kaniya (Everyone really prayed hard for her),” she said.

“With God, nothing is impossible. Huwag po tayong bibitaw sa panawagan na tuluyang makansela ang hatol kay Mary Jane. Ang milagrong ito ay isang patotoo na ang nagkakaisang tinig hanggang langit naririnig (Let us not give up in continuing to pray that her conviction may be turned over. This miracle is proof that a united voice can be heard up to the heavens),” she said.

Like her father Vice President Jejomar Binay, she called on Filipinos to continue praying for Veloso’s safety. IDL