12 ambulances dispatched to Indonesia prison ahead of executions

As many as 12 ambulances belonging to the Cilacap Health Agency traveled to Nusakambangan prison island on Tuesday, ahead of the scheduled execution of nine death row inmates.

Antara news agency reported from the Wijaya Pura quay in Cilacap, Central Java, that ambulances emblazoned with numbers approached the crossing terminal for Nusakambangan at 9:25 a.m. local time, with a tight security escort from the police.

Nine of the 12 ambulances were seen to be carrying coffins, while the remaining three ambulances seemed to be back-up vehicles as they were empty. The 12 ambulances crossed to the Sodong quay on Nusakambangan using the prison island’s motor vessel, the KM Pengayoman IV.

The arrival of the ambulances and coffins has sparked speculation that the executions of the death row inmates, mostly convicted on drug trafficking charges, will be conducted either on Tuesday evening or early Wednesday.

With the executions drawing nearer, Attorney General’s Office (AGO) spokesperson Agung Tony Tribagus Spontana announced that Atlaoui was crossed off the list as he was filing a lawsuit against President Jokowi’s clemency request refusal with the State Administrative Court. 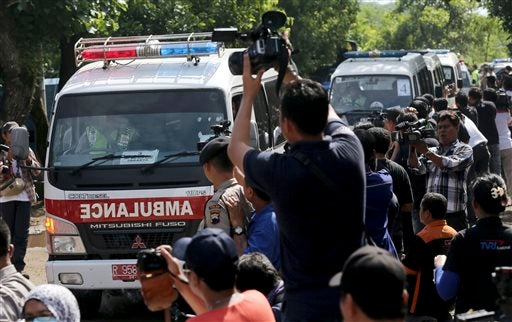 Members of the media photograph a convoy of ambulances as they arrive at Wijayapura ferry port to cross to the prison island of Nusakambangan, in Cilacap, Central Java, Indonesia, Tuesday, April 28, 2015. AP

Coffins arrive at Indonesian prison as executions near