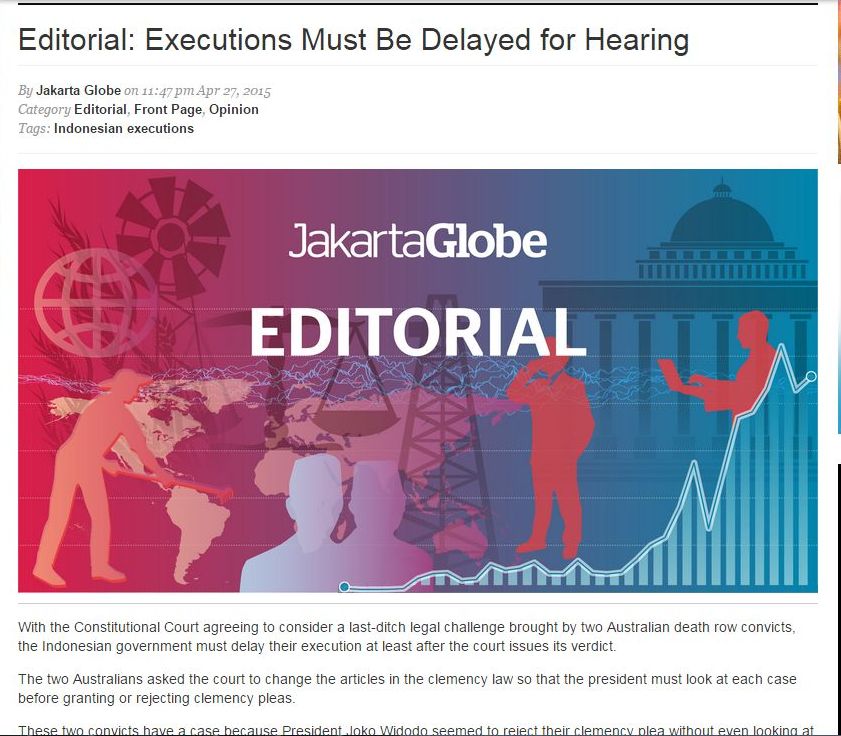 Screenshot of the Jakarta Globe’s editorial

ILIGAN CITY, Philippines – As the execution of Filipina migrant worker Mary Jane Veloso and eight others convicted for drug trafficking offenses in Indonesia drew near, an English-language daily in Jakarta joined the increasing number of voices making last-minute appeals to save them from the firing squad.

If its proposal is adopted by Indonesian President Joko Widodo, more popularly known as Jokowi, the nine convicts on death row may be spared the firing squad for at least two weeks.

In an editorial posted on its website 11:47 p.m. on Monday, the Jakarta Globe urged the Indonesian government to delay the executions until after the country’s Constitutional Court shall have issued a verdict on a last-ditch legal challenge posed by two Australian convicts on death row.

The Jakarta Globe is one of the most-read and influential English-language newspapers in Indonesia.

The Indonesian Attorney General’s Office has announced that the executions by firing squad in the penal island of Nusakambangan will proceed as scheduled citing that all the convicts have exhausted all legal recourse available to them.

On the part of Veloso, the second appeal filed at the Slema district court where her case was heard was rejected, making her execution imminent.

Barring any more legal remedy, only an executive clemency by the Indonesian president can prevent the executions from proceeding.

Jakarta Globe earlier reported that one of the 10 original convicts on imminent death row, Indonesian Zainal Abidin, had an appeal set to be heard last Monday.

The Jakarta Globe said the Constitutional Court has agreed to consider the legal question raised by the Australians who asked it “to change the articles in the clemency law” to make it mandatory for the president to “look at each case before granting or rejecting clemency pleas.”

“These two convicts have a case because President Joko Widodo seemed to reject their clemency plea without even looking at their case. In fact, he rejected all the pleas just because the court previously found them guilty as drug dealers or traffickers, and because Joko has stated publicly that there’s no mercy for drug traffickers,” the Jakarta Globe noted.

“On the basis that Joko won’t grant any clemency to drug offenders, we have reasons to believe that there have been no reviews of the cases at all,” it emphasized.

“The government, of course, can press on with the execution because they can simply say that the president has reviewed them all,” it further said.

The newspaper said the Constitutional Court would begin the hearing on the Australians’ legal challenge on May 12.

“It’s better for the government to delay the execution for several days and let the court rule (on the matter)… As the Constitutional Court’s ruling is final and binding, it is probably the final effort for them to avoid the firing squad,” the Jakarta Globe counselled.

“But giving a chance and hope to people on death row, however slim it is, will be hugely noble,” it added.

Monday’s editorial is Jakarta Globe’s third within the last four days on the subject of the impending executions.

On Sunday, the newspaper urged Jokowi to “repeal the planned execution of 10 drug convicts” because it would go against Indonesian national interests.

“Will executing these convicts benefit the country and its people? Are the executions in the interest of the nation?” the Jakarta Globe asked.

“Inviting massive international condemnation is not in the interest of Indonesia at all. We have been criticized as murderers,” the newspaper explained.

There has been a diplomatic firestorm between Indonesia and the foreign governments whose nationals are set to face the firing squad.

“Destroying our relations with otherwise friendly countries like Australia, Brazil and France is hardly an act of defending our interests… Arguing that executing these convicts can create a deterrent against drug traffickers is all myth,” the Jakarta Globe pointed out.

“How many people have been sentenced to death? Has the amount of drugs in circulation gone down? No, it hasn’t,” it said.

Last Friday, the Jakarta Globe appealed for mercy for the then 10 convicts on death row.

“A day that no rational, compassionate human being could ever wish for appears to be at hand: the day that 10 fellow human beings, nine of them foreign nationals, are gunned down in a hail of bullets because the Indonesian government wants to make a barbarous point,” its April 24 editorial read.

“It is in the president’s power to end this shameful travesty and grant these individuals clemency. So it is to President Joko Widodo that we beseech mercy for Mary Jane Fiesta Veloso; for Serge Areski Atlaoui; for Myuran Sukumaran; for Andrew Chan; for Rodrigo Gularte; for Raheem Agbaje Salami; for Martin Anderson; for Sylvester Obiekwe Nwolise; for Okwudili Oyatanze; and for Zainal Abidin.”

“We stand for mercy, Mr. President. Will you stand with us?” the Jakarta Globe asked. SFM/AC