US Pinoys: Pray to Blessed Mother to protect us from China 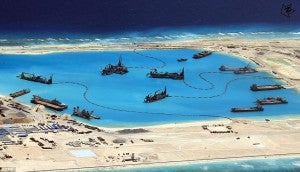 “Through prayer and fasting, one can stop wars, one can suspend the laws of nature.”- Blessed Mother Mary to Mirjana, Medjugorje visionary, July 21, 1982.

The driving force behind these constructions is China’s demonic plan to own and control the Philippines’ enormous oil and marine resources. To sustain continuous economic growth, China needs a constant supply of energy. It is now the world’s biggest importer of oil, most of it from Russia, Iran and Saudi Arabia. The fish and other foods from vast Philippine marine resources can also feed millions. 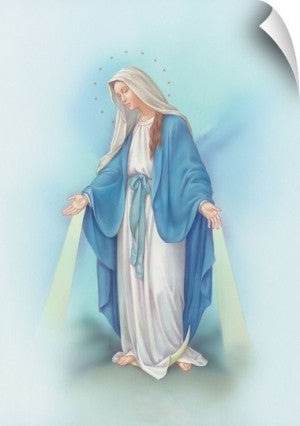 However, having legitimate needs does not justify stealing resources from other people who also need them. But China’s leaders show no concern for moral niceties.

They see the Philippines as a weak, dysfunctional, corrupt nation with practically no military power, whose enormous natural resources are easy to take. They expect Filipinos to be helpless and frozen with fear when they invade and establish military bases in Philippine territory. Their expectations have so far been proven to be true.

Their only concern: If the U.S., the Philippines’ powerful ally, interferes and stops them. But when disputes escalated between China and the Philippines, the U.S. announced that it would not interfere in territorial disputes. This encouraged China to send more naval and fishing boats inside Philippine waters. Meeting no resistance, it proceeded to rush the construction of military bases and stations.

When these are completed, bombers, fighter planes, helicopters, missiles, warships, gunboats and thousands of military personnel will be stationed there. It will then be a cakewalk to install their giant super oil rigs and also control the fishing over thousands of square miles of Philippine territory. China will exclude the Philippines from benefiting from its own vast energy and marine resources.

This, essentially, is China’s game plan. Any other representations by Chinese officials to the contrary are nothing but sneaky, misdirecting cover-ups. Upon the global community’s discovery of these bases, a Chinese spokesperson immediately announced the obvious lie that these constructions were to be used merely as service stations for fishermen.

If these bases are completed, the national security of the Philippines and surrounding countries and the welfare of generations of Filipinos and other nationalities would be perpetually threatened as it would then be practically impossible to dismantle them.

Upon discovering the enormous oil reserves in Philippine waters, China conceived of a bold, devious plan to own and control the precious black gold. It would also get the Philippines’ vast fishing domain as an added benefit.

China justified its imaginative plan with obvious fictions. It started by claiming ownership of the whole South China Sea on the basis of ludicrous reasons, which cannot possibly legally stand upon scrutiny. It absolutely knows this but it doesn’t care: “Might makes right” is its only actual, real, raw, brute argument.

Beijing claims that various ancient Chinese maps show that the whole South China Sea belongs to China, including the Philippines’ 200-mile Exclusive Economic Zone as defined by the United Nation’s Convention on the Law of the Seas (UNCLOS) which China in fact signed in 1996. It has not publicly shown any of these supposed maps. In response, Philippine Supreme Court Justice Antonio Carpio publicly exhibited authentic, ancient maps. None of them supported China’s claims.

Even assuming that there are such maps, these cannot give legal ownership rights to China over such an area as the Philippines 200 mile EEZ. Historical events over time cause changes in national boundaries. The Philippines was under Spain, then under Great Britain, back to Spain, then under the United States, then to the Japanese, back to the United States, then independence. China’s legal ownership claim based on ancient maps is pure garbage. Italy might as well also claim ownership of Europe and parts of Africa because these were once under the Roman Empire.

To further supplement China’s ridiculous territorial ownership claim it conveniently adopted another fiction concocted in 1947 by an unknown official in Chiang Kai Shek’s Kuomintang government. The official arbitrarily drew a U-shaped line composed of 11 dashes on a map of the South China Sea. Nobody really knows whether he just wanted to show the extent to which Chinese fishermen could go fishing or maybe was just fantasizing that Chiang’s government might someday own a huge designated area. In any case, no formal or any kind of territorial claim was ever made by Chiang’s government based on this map which later became known as the “nine dash line map” (the eleven dashes were later shortened to nine).

Clearly, an action by a government claiming territory based on an arbitrarily drawn line on a map neither has any legal or other rational authority that can be taken seriously. As such, the map was just mothballed. It was never used for any formal territorial claim. 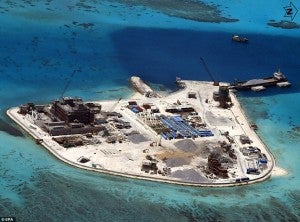 That is, not until China discovered the massive oil deposits in Philippine waters. Then suddenly, on May 7, 2009, China started using the concocted Kuomintang government’s 9-dash line map together with the supposed ancient maps as a basis for claiming ownership of a whole ocean plus the territories of other nations.

The Philippines has filed a complaint against China in the International Tribunal on the Law of the Seas (ITLOS) but China announced that it would not participate in the proceedings nor honor it’s decision. Of course, it would have an ice block’s chance in hell to win there. However, since no force is stopping China, it rushed military construction has proceeded merrily along in Philippine waters.

Over a year ago, I found out about China’s initial base construction in Philippine territory. I immediately wrote about the dangerous implications of increasing Chinese aggression on Philippine security and economic interests. I urged Philippine officials to persistently seek logistical and moral support from our powerful allies and immediately destroy this Chinese project. But great fear can shrivel and fossilize people’s minds. Like so many of our citizens they believe that we are helpless and alone against China’s military might. We are not. We have powerful allies and countries friendly to us.

Ironically, by announcing that we are limiting our options only to the ITLOS action, we gave China effective notice that it could proceed with its rushed constructions without interference. Now, not only one but seven deadly military bases and stations are already in advanced stages of construction.

I’m a lawyer and I respect the rule of law. But what if you are faced with the reality that the other side has a Mafia mentality and acts in bad faith with no respect for the law nor for you. Then you had better face reality and defend yourself as appropriate or you will get slaughtered.

But even if we don’t have the admirable courage of the Vietnamese and the Israelites in facing powerful enemies, heaven has recently favored us. Because of the alarming satellite pictures showing China’s extensive military base constructions, the U.S. and the other most powerful industrialized countries in the world — Japan, U.K., Germany, France, Italy, Canada, known as the Group of Seven (G-7) — have now become aware of China’s violations of international law, it’s aggression and apparent greed-based, malicious plans. A powerful joint collective statement was issued a few days ago by the G-7 countries, specifically referring to China’s Philippine territory constructions:

“We strongly oppose any attempt to assert territorial or maritime claims through the use of coercion, intimidation and force…We call on all states to pursue the peaceful management or settlement of maritime disputes in accordance with international law, including through internationally recognized legal disputes settlement mechanisms, and to fully implement any decisions rendered by relevant courts and tribunals which are binding on them.”

The G7 countries also called for the protection of the delicate marine environment which is being damaged extensively because of China’s massive constructions.

President Barrack Obama himself did not mince words when he strongly criticized China for using “sheer size and muscle” to intimidate and “elbow” smaller countries. This was preceded just days before by statements from U.S. Pacific Fleet Commander Harry Harris and Defense Secretary Ashton Carter declaring that the U.S. is prepared to use military force against China if necessary.

These policy statements were followed a few days later by massive war exercises involving around 12,000 military personnel from the Philippines, U.S. and Australia near China’s bases construction sites, which are still ongoing. 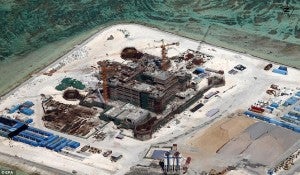 China’s more responsible leaders and citizens should immediately stop the construction of these military bases in Philippine territory to serve their interests. The very strong collective expressions of warnings from the most powerful nations on earth are telling China in no uncertain terms that its rogue nation bullying behavior is not acceptable.

These military bases threaten not only the Philippines’ national security and economic interests but also those of the G7 and other countries as well. They also threaten world order and peace. And they also threaten the security and safety of the Chinese people. These bases can lead to a terrible war that no one wants. The world cannot allow them to exist. They have to be destroyed one way or another.

US Pinoys call on Blessed Virgin Mary for help

Since China respects neither international law nor moral law, a group of influential Filipino-Americans believes that asking help from a higher authority to protect the Philippines from China’s aggression is necessary.

The US Pinoys for Good Governance (USPGG) has passed a unanimous resolution calling on Filipinos in the Philippines and all over the world to pray to the Blessed Mother and to her son Jesus Christ to protect the Philippines from China’s aggression. Consistent with Christian tradition, when asking for favors from our Blessed Mother or from our Lord, those who wish may fast at least one day a week ingesting only bread and water or doing some other form of sacrifices. She is the Patron Saint of the Philippines.

The USPGG is also respectfully asking Cardinal Luis Tagle, other church officials, priests, brothers, nuns and laymen to support this important sacred call for prayer and fasting and announce this call in schools, Sunday masses and other venues.

Under the protection of our Blessed Mother and her son Jesus, even with its mighty army, the dragon will not prevail. Let us also pray for the good Chinese people. They are not our enemy. The darkness and the evil in the minds and hearts of their leaders are the real enemy. They also cause much pain and danger to the Chinese people.

Please air this call to all Filipinos and ask them to do the same. We are praying peacefully for our future and the future of generations of Filipinos.