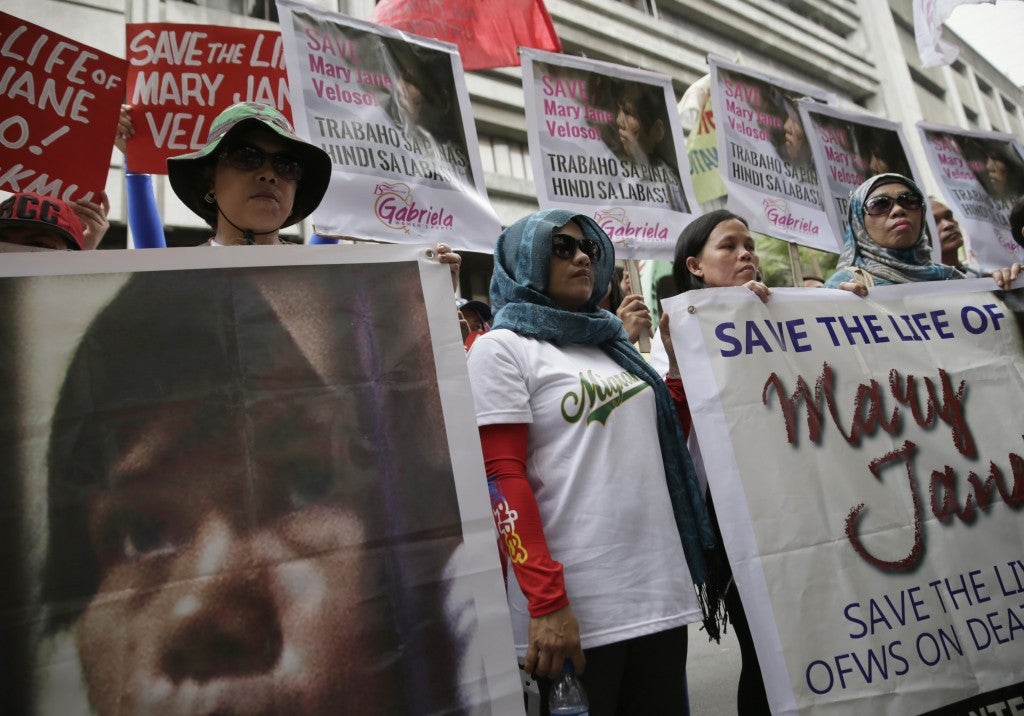 Protesters display placards during a rally at the Indonesian Embassy in the financial district of Makati city, east of Manila, Philippines, to appeal to the Indonesian government to spare the life of convicted Filipino drug trafficker Mary Jane Veloso Friday, April 24, 2015. AP

Filipino maid Mary Jane Veloso was reunited with her family on Indonesia’s so-called execution island of Nusakambangan on Saturday, three days before she was to be executed by firing squad for drug trafficking.

Speaking to reporters by telephone from Indonesia after the reunion, Veloso’s mother, Celia, said her daughter had received notification from the attorney general’s office that she would be executed on Tuesday, April 28.

Celia Veloso appealed to President Benigno Aquino III to save her daughter’s life.

“Mr. President, please do your duty as father of the nation. We need your help. Please save my daughter,” Celia Veloso said, adding that her daughter was innocent.

As the 72-hour countdown to her execution began, Mary Jane Veloso, 30, was allowed to see her family on Saturday in her cell on Nusakambangan.

On seeing her sons Mark Daniel, 11, and Mark Darren, 6, whom she last saw five years ago when she left the Philippines, Veloso hugged them, according to Edre Olalia, secretary general of the National Union of People’s Lawyers and one of the lawyers for Veloso who joined the trip to Nusakambangan.

“If I die, you should be proud of me. Mama died because of what bad people did to her. Mama died with a pure heart,” Veloso told the boys, according to Olalia.

Olalia described Veloso as calm and composed as she met her family—parents Cesar and Celia, her sons and sister Marites—her lawyers and Philippine Embassy officials.

He said Veloso told her family not to be sad for her.

“The little boys were playful with the mom. Her mother and father [broke down] but they [later] regained their composure,” he said.

“I don’t like crying,” Olalia quoted Veloso as saying to her parents and children.

In a radio interview from Indonesia, Marites Veloso also said that her sister received the notice of execution yesterday afternoon. She said the execution had been set for Tuesday.

“We are asking for help from all of you. We need you now more than ever. Please pray for my sister,” Marites said.

Early Saturday, Veloso’s family received the order for her execution and those of nine other drug convicts, but the order did not indicate the date of the executions.

Agence France-Presse reported Saturday night that Veloso and two of the other convicts, Australians Myuran Sukurman and Andrew Chan, were given official notification by Indonesia that they would be executed, but with no given date.

“We received an order of execution but that does not mean she will be executed soon,” Olalia told dzMM radio from Jakarta.

“The date was not specified. It is not saying she will be executed soon,” Olalia said.

Under Indonesian law, death convicts are given 72 hours’ notice before their execution. The governments of foreign death convicts receive the same notice through their embassies in Jakarta.

The Department of Foreign Affairs (DFA) in Manila could not confirm as of press time last night that the 72-hour notice had been given to Veloso.

Earlier yesterday, Charles Jose, spokesperson for the DFA, confirmed reports that Veloso’s family had received the order of execution from the attorney general’s office.