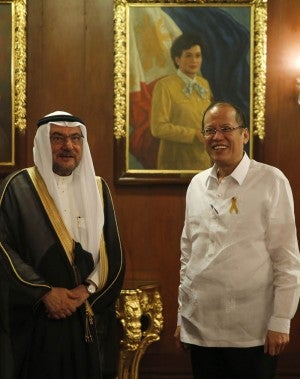 MANILA, Philippines–The visiting top official of the Organization of Islamic Cooperation (OIC) on Monday warned that the failure of the Philippines to settle the peace problem in Mindanao could open the door for radical groups to create trouble there.

Madani, who has been in the country since late last week, met separately on Monday with President Aquino, Senate President Franklin Drilon and Speaker Feliciano Belmonte Jr.

“We came out of the meeting with the President optimistic that (the BBL) would pass under his watch,” Madani told Palace reporters, adding that Aquino’s commitment to the peace process was apparent and many appreciate the President’s efforts.

He expressed hopes that the BBL would be approved “sooner rather than later” and warned that “if it is diluted” it would render the Comprehensive Agreement on the Bangsamoro “an empty shell.”

Madani doused concerns that a Bangsamoro autonomous region would ultimately lead to a separate state, saying such fears were “unrealistic.”

Drilon said Madani’s visit should not be viewed as a bid of the OIC to pressure lawmakers to pass the BBL. The measure faced difficulties in Congress following outrage sparked by the deaths of 44 elite police troopers in Mamasapano, Maguindanao province, on Jan. 25 while on a mission to take out high-value terrorists in MILF-controlled territory.

In their joint news conference after their over half-hour meeting, Drilon and Madani described the Mamasapano slaughter as “unfortunate.” They said the episode should not affect the passage of the BBL.

“We all agree that it should not distract us,” Madani said.

He was asked what he thought would happen if the BBL was not passed.

“I think if we don’t settle that issue… we will lose the opportunity that is so near us now,” Madani said. “I can only say that it will create frustration, that it will create tension, create disappointment and anytime, anywhere you have conditions of this nature, you open the door for some elements to radicalize. You give these radicalized elements ammunition.”

He said a successful peace process in Mindanao would “minimize and eliminate the prospect of radicalization.”

Drilon later told reporters that the OIC’s support would “go a long way in encouraging all quarters in the country to support the BBL.”

“The stability of Mindanao and achieving peace in Mindanao is a signal and it’s a foundation upon which investments will be coming and address the poverty in many parts of Mindanao both from the OIC and those outside of the OIC,” Drilon said.–With a report from Nikko Dizon

OIC head calls for support for BBL, says it will not lead to secession

OIC chief due in Manila