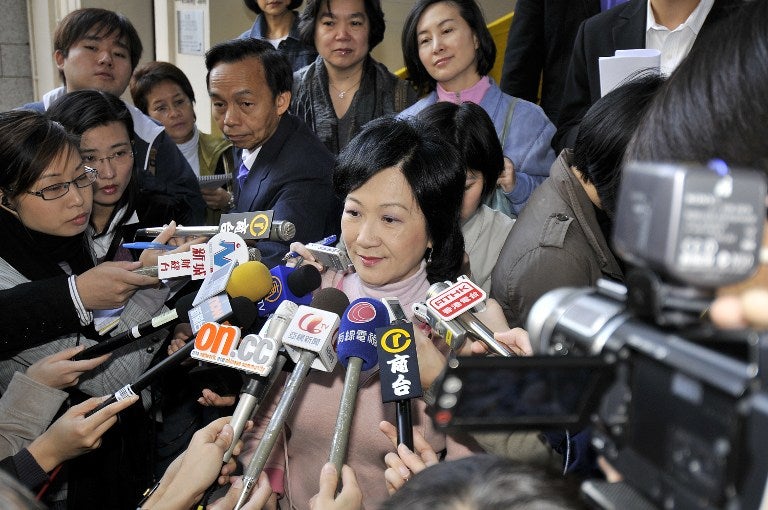 Hong Kong’s ex-security chief and now lawmaker Regina Ip talks to the press in this December 2, 2007, file photo. She is under fire after she accused some Filipino domestic helpers of seducing their male employers, in comments branded “racist” and “offensive” by critics. AFP PHOTO/ANDREW ROSS

HONG KONG—A senior Hong Kong politician is under fire after she accused some Filipino domestic helpers of seducing their male employers, in comments branded “racist” and “offensive” by critics.

There are 300,000 maids in Hong Kong, mostly from the Philippines and Indonesia, with concern growing among rights groups over their welfare following a string of abuse cases.

But lawmaker Regina Ip, a close adviser to the city’s leader Leung Chun-ying and tipped as a future chief executive, cast the maids as marriage wreckers.

In an op-ed article in Chinese-language newspaper Ming Pao on Friday, Ip told how jilted expatriate wives had complained to her that their maids had led their husbands astray.

“I have received complaints from expatriate women … that Filipino domestic helpers seduce their husbands,” Ip wrote.

“I could only tell them that under the current laws it is quite difficult to regulate,” she said.

Ip said she had learned of “families wrecked because of relationships between Filipino maids and male employers.”

“Rather than reporting improper behavior by local employers, should we pay more attention to Filipino maids becoming sexual resources for foreign men in Hong Kong?” she said.

In her article, Ip linked her theory to the recent case of a 15-year-old girl, with a British father and Filipino mother, who fell from a luxury apartment block in an apparent suicide earlier this month.

Although police said there were no suspicious circumstances around the fall, the teenager’s mother Herminia Garcia—a former domestic helper—and her British businessman father, Nick Cousins, were arrested.

Garcia was charged with overstaying her visa and “neglect” of an unnamed 14-year-old child. Cousins is on bail for neglect and abetting the overstay, but has not been charged.

Ip cites the case as a “reflection” of what she describes as “abnormal relationships” between maids and employers.

“It is racist to stereotype a particular nationality,” said Eman Villanueva of the Hong Kong-based Asian Migrants’ Coordinating Body. “She should be banned from entering the Philippines.”

“Foreign domestic workers are treated as second-class citizens by some politicians who feel no qualms about making offensive statements about them,” Mo said on Monday.

Ip—a member of the government’s Executive Council or Cabinet—told Agence France-Presse that her comments had been misinterpreted.

“I merely cited some facts,” she said.

“The purpose of the article was to express concerns for foreign domestic workers as to whether they have been exploited … I wasn’t pointing a finger at anyone.”

The plight of maids in Hong Kong was highlighted by the case of Indonesian helper Erwiana Sulistyaningsih, who was beaten and starved by her employer Law Wan-tung in a case that made world headlines.

Law was jailed in February for six years over the abuse.

As security minister in 2003, Ip was a key sponsor of a national security bill that sparked the biggest-ever public protest in the territory and was eventually dropped.