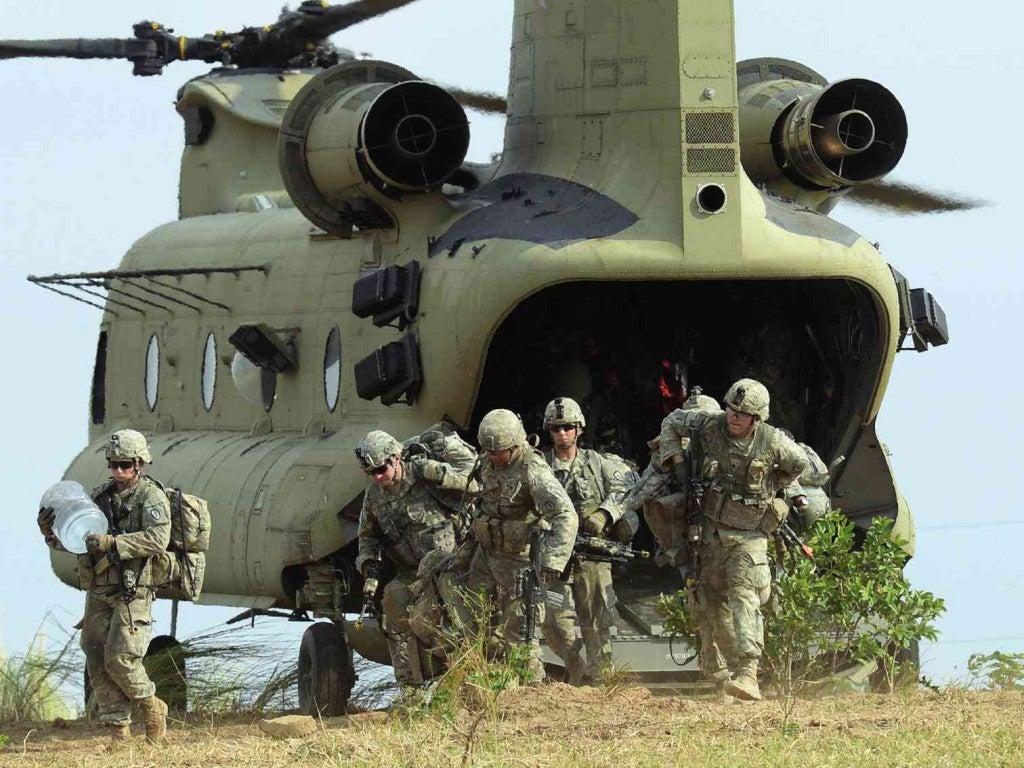 LET THE WAR GAMES BEGIN US soldiers disembark from a Chinook helicopter during an air assault exercise with their Filipino counterparts in Fort Magsaysay, Nueva Ecija province, at the start of the joint US-Philippines annual military exercises. AFP PHOTO

FORT MAGSAYSAY, Nueva Ecija—Ramon Lacbain II on Monday joined some 100 regular and reserve members of the Philippine Navy in training lectures conducted by Philippine and US officers at the start of 10-day annual war exercises.

“In the next few days, we will be participating in live-fire drills, maritime patrolling or surveillance and inland area defense,” said Lacbain, vice governor of Zambales province and a Navy reservist.

Lacbain will serve as commander of the 13th Naval Reserve Group in Central Luzon.

What he will learn during the annual Balikatan exercises involving 6,000 US and 5,000 Philippine soldiers will, as officials put it, serve to enhance efforts to boost security in a region subjected to “bullying” by China that US President Barack Obama scored recently in the wake of Beijing’s construction of military facilities in disputed waters off Zambales.

“We make no pretense that we are helping the Philippines as it fields a minimum credible defense,” US Ambassador Philip Goldberg said at the drills’ opening ceremony.

“The US is committed to its alliance … and the US will defend the important principles of freedom of navigation in the air and the sea,” Goldberg said. However, he insisted that the exercises were not directed at China.

“We have compelling reasons to raise our voice to tell the whole world the adverse effects of China’s aggressiveness that has created tensions not only among the countries who have overlapping claims in the area,” said the chief of staff of the Armed Forces of the Philippines.

Once completed, the artificial islands could be transformed into offshore military bases with airstrips and maritime patrol hubs that could threaten the freedom of navigation in that section of the South China Sea, with busy oil and commercial cargo lanes, Catapang said.

He said some of the reclamation projects were several kilometers from a Philippine-occupied island and a reef, raising the possibility that Chinese military patrols could cut off Manila’s access, along with that of Filipino fishermen, to those areas.

Philippine government agencies are meeting to determine how to respond to the situation, Catapang said, adding that the country wants a peaceful resolution based on international laws.

At the weekend, fishermen told the Inquirer that a Chinese Coast Guard vessel drove away a fleet of eight Filipino boats fishing in their traditional grounds at Panatag Shoal (Scarborough Shoal), where the Chinese infrastructure construction was taking place.

The joint land training for Balikatan will be held in Fort Magsaysay, a 73-hectare training facility of the Philippine Army.

“This cooperation in terms of training and exercises has proven to be beneficial to the organization and to the country, as a whole, as it involves the exchange of military know-how between the participating countries, and beyond [its mandate], through the conduct of peace and development initiatives,” said Maj. Gen. Glorioso Miranda, commander of the 7th Infantry Division.

The military drills would take place inside the Naval Education and Training Command in San Antonio, Zambales, 240 km from Panatag Shoal, a territory being disputed by the Philippines and China.

Subic Bay Metropolitan Authority Chair Roberto Garcia said US warships and supply vessels had been unloading equipment and provisions in the former American naval base since last week. Some of the equipment have been shipped to war game sites in Central Luzon.

Philippine military officials said the maneuvers, which involve more than 90 aircraft and ships, were not directed at China. But the venue of some of the war games in waters facing the disputed region and a focus on territorial defense appear to link the exercises to the long-simmering conflict.

Chinese officials have defended the land reclamation by saying it is Beijing’s territory, adding the facilities were for public use and to support fishermen.

But the Philippine military has said the massive scale of the reclamation activities and the emergence of runway-like facilities raise the possibility they could be for military use to reinforce China’s extensive territorial claims.

The Spratly chain of islands, reefs and atolls where most of the Chinese land reclamation activities have been detected, has long been contested by China, the Philippines, Taiwan, Malaysia, Vietnam and Brunei. Aside from possible oil and natural gas resources, the vast region also straddles busy sea lanes and teems with rich fishing grounds.

“I must say that there was better focus and attention to minute details,” Lopez said during Balikatan 2015’s opening ceremonies held at the AFP Commissioned Officers’ Club in Camp Aguinaldo.

Lopez said that about 70 members of the Australian Defense Force are also included in the exercise.

Brig. Gen. Christopher Mahoney, US Balikatan assistant exercise director, said this year’s Balikatan “will surely be the best yet” as it motivated several nations as participants and observers.

Mahoney expessed the hope that these countries would someday join the exercises and contribute to making the world secure, stable and prosperous.

“We know from the previous generation of exercises that working together, security and stability aren’t free,” Mahoney said. “We have to work at it, both are achievable when we work together cooperatively.”

“Tensions in the Asia-Pacific region have increased due to excessive and expansive maritime and territorial claims, aggressive behavior that aims to change the status quo, undermining the rule of law, threatening the freedom of navigation and overflight,” Foreign Undersecretary Evan Garcia said.

“We look to our ally, the United States, to engage their own network of alliances in the regions in helping to uphold the international order it has forged and put into place since World War II, thereby maintaining regional stability,” Garcia said.–With wire reports