MANILA, Philippines–President Aquino will raise China’s land reclamation in the South China Sea with other leaders of the Association of Southeast Asian Nations (Asean) when they meet in Kuala Lumpur, Malaysia, next week.

“Definitely, the reclamation issue will be the main topic that the President will raise,” Foreign Assistant Secretary Luis Cruz said in a press briefing in Malacañang on Monday.

Cruz said the issues Aquino would raise against China’s massive land reclamation activities would be “more than what he raised during the last summit.”

Cruz reiterated the President’s statement that the South China Sea issue should concern the international community and not just Southeast Asia.

The Philippines on Monday again voiced alarm about China’s “aggressiveness” in the disputed waters.

Armed Forces of the Philippines Chief of Staff Gen. Gregorio Pio Catapang Jr. released what he called satellite photos of China’s rapid reclamation of land at seven reefs and islets in the Spratly archipelago in the middle of the South China Sea. 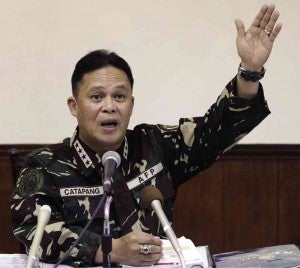 “We are really amazed at the pace that China is reclaiming [land in] the area—it’s fast but I hope it’s not furious. We feel ourselves in a very difficult situation,” Catapang told reporters at the opening ceremony for this year’s joint exercises between American and Filipino troops at Camp Aguinaldo in Quezon City.

Catapang said the Chinese occupation of Mischief Reef “threatens our defenses and all the other islands.”

“If they reclaim Mischief Reef, we will be cut off,” he said.

“We have a series of islands going down south, going up north, and it will challenge the Ayungin Shoal, which we are claiming, and we have soldiers there,” he added.

Catapang said the military was ready to defend the islands controlled by the Philippines, although it supported the government’s effort at UN arbitration to resolve the territorial dispute with China.

Besides the Philippines, Vietnam, Brunei, Malaysia and Taiwan also claim parts of the Spratlys, where reefs, atolls and islets are believed to be sitting atop vast oil and gas reserves.

The area is also crisscrossed by sea-lanes where a third of global commerce pass every year.

China claims 80 percent of the South China Sea, including waters within the 370-km exclusive economic zones of its smaller neighbors.