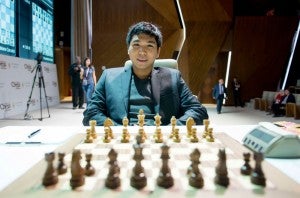 GM Wesley So has two wins and a draw in three rounds of the Gashimov Memorial tourney in Azerbaijan. PHOTO BY SHAMKIR CHESS 2015.

LAS VEGAS, Nevada – In a show of masterful tactical skill, Wesley So outplayed British grandmaster Michael Adams to keep his share of the lead with world champion Magnus Carlsen of Norway in the Gashimov Memorial chess tournament in Azerbaijan.

So exchanged two rooks for a queen to sustain a kingside attack, forcing Adams to give up after 46 moves of a Queen’s Gambit Declined, exchange variation.

It was the second win for So in the nine-man tournament, which features the reigning world champion and two former world champions.

Carlsen beat Fabiano Caruana in the only other decisively settled third-round game to keep pace with So, each with 2.5 points.

Vladimir Kramnik, who was world champion from 2000 to 2006, follows So with two points, after another draw Sunday, the same result of his second-round game with So.

The 39-year-old Kramnik agreed to halve the point with So after 40 moves, finding no headway against the Bacoor, Cavite native’s precise responses with black of a seldom-used opening.

In the first round, So demolished old nemesis Anish Giri ot the Netherlands to avenge his only loss in the Tata Steel super-tournament earlier this year.

The 21-year-old Giri also beat the 21-year-old three times before, including their first encounter at Tata Steel, and the losses rankled.

“Anish beat me a lot in the past and they were hard losses,” said So in an interview with chess24.com.”I learned a lot from my losses.”

“Lost the first game — So be it! Looking forward to recover in the upcoming rounds!” Giri humorously said in a tweet.

With two wins at the tail-end of the US Chess Championships after the 9th round forfeit, So has now compiled an impressive four wins in five games, indicating his personal problems are now behind him

A spat with his estranged family in Saint Louis threatened to distract him and disrupt his concentration while playing in important tournaments.