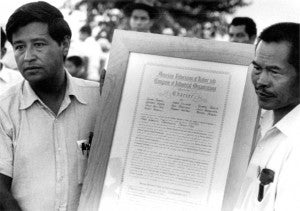 Under AB 7, authored by Assemblymember Rob Bonta (Dem-Oakland) — the first Filipino-American elected to the state’s Assembly — October 25, Itliong’s birthday, will be the designated day to commemorate the Filipino American farm labor organizer.

“The accomplishments and contributions of Larry Itliong should be properly memorialized within the history and culture of the United States of America. Larry Itliong deserves proper recognition for his numerous sacrifices in the name of justice and the suppression of several inadequate working conditions,” the bill stated.

The bill also encourages public schools to teach about Itliong’s life and contributions to California.

“On Larry Itliong Day, all public schools and educational institutions are encouraged to conduct exercises remembering the life of Larry Itliong, recognizing his accomplishments, and familiarizing pupils with the contributions he made to this state,” reads AB 7.

Itliong, originally from San Nicolas, Pangasinan, emigrated to the United States in 1929 at the age of 15, and worked as a migrant farm worker in Montana, South Dakota, Washington and California, where he saw the plight of other labor workers, especially Filipinos.

As a leader of the Agricultural Workers Organizing Committee (AWOC), Itliong is remembered for sparking the California farm labor movement in 1965, organizing an eight-day strike with 1,500 Filipino grape workers in Delano. The boycott called for increased wages and better working conditions for the farmworkers.

“Larry Itliong was one of the greatest labor organizers and leaders in California history,” Bonta said in a statement. “He was a hero not only to the Filipino American community, but to all Californians and Americans who fought and continue to fight for socioeconomic and racial justice in our state and nation. AB 7 properly honors his life’s work and legacy of fighting for justice, opportunity, and equity.”

Itliong eventually joined forces with the National Farm Workers Association led by Cesar Chavez to start the United Farm Workers of America. However, Itliong’s contributions have not been etched into the country’s history,] as largely as Chavez’s.

“While the farm labor movement is often seen predominantly as a Latino movement, it encompassed much more than just one ethnic group. Filipino American and Latino labor leaders built a beautiful collaborative relationship to create the farm worker movement in California, and Larry Itliong played a critical leadership role in that movement,” Bonta said.

In 2010, the City of Carson became the first in the United States to issue a proclamation to dedicate a day to Itliong; Los Angeles County shortly followed with a resolution.

Three years later in 2013, Carson City Council passed a resolution to celebrate Larry Itliong Day every October 25, and other recognitions for the labor leader followed.

The same year, Governor Jerry Brown signed AB 123 into law — also authored by Bonta — requiring state curriculum to include the untold contributions of Filipino-Americans, like Itliong and Philip Vera Cruz, to the farm labor movement in California.

Alvarado Middle School in Union City was renamed Itliong-Vera Cruz Middle School, becoming the first school in the country to be named after Filipino-Americans. And in Historic Filipinotown, the Pilipino Workers’ Center and the Little Tokyo Service Center opened the Larry Itliong Village, a housing development that provides community spaces and 44 units of affordable housing.

The participation of Filipino-Americans in the farm labor movement has a personal connection for Bonta, as his parents organized farm workers in Kern County. Sharing these stories remains one of his advocacies while in office.

“I’m grateful to have this opportunity to recognize [Itliong’s] contributions to California,” he said.