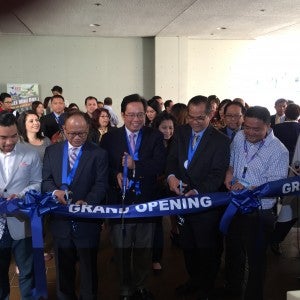 The opening brings to 12 the number of PNBRCI branches serving Filipino American communities in California. Its first branch was in National City near San Diego in 1991, from where the pioneer remittance company grew its presence in 23 states with 130 centers in the U.S. and overseas. Philippine National Bank, the 7th largest bank in the Philippines, owns PNBRCI.

Villacisneros cited the importance of the services PNBRCI offers to overseas Filipino workers who send money to their families in the Philippines. He estimates that more than 50 percent of U.S. remittances come from California alone.

Consul Herrera-Lim said he was gladdened by the happy faces he saw at the opening “which manifested the optimism of Filipino Americans for their community and their country of origin.”

Meanwhile, PNB executive Benjie Oliva credited OFWs in bringing up their families to the middle-income classes with their remittance payments. “Many OFW families move up in the consumption curve with the money sent to them from overseas,” said Oliva. “Home purchases by OFWs have lifted also the real estate and housing sectors of the country. But now, OFWs can buy properties for investments or personal residence through the home-purchase loan program offered by PNB in the U.S., ” added Oliva.

Asked why home-purchase loans have not taken off in the U.S., Oliva explained: “The housing market heated up in the last five years, so the housing developers had their hands full just with domestic demand and scaled down on overseas sales. But now the same developers are partnering with the PNB to provide the financing of overseas sales from U.S. residents, which makes me optimistic of the OFW market ”

Villacisneros touted the new branch as a “one-stop shop,” not only because PNBRCI chose to be closer and very accessible to and from the Philippine Consulate-General, which is located in the same building, but also because other services including document authentication and balikbayan box shipping offered by XYZ Express Cargo and travel services through Mango Tours are all in the same premises.

Salvador Agudo, an accountant employed by the Los Angeles county government, the largest employer of Filipino Americans in Los Angeles, told TheFILAMLA that the opening of the new branch was good for him.

“I like dealing with PNB, they’re been around for a long time so I trust them with my remittances,” he confided. “Besides, they’re very close to the consulate, which makes it easier for me to take care of my personal transactions with them.”

Read Next
China building runway in disputed South China Sea—source
EDITORS' PICK
Acer starts the year off strong with the Aspire Vero National Geographic Edition
97% of COVID-19 beds at PGH currently occupied
Uproar over no vax, no ride policy: Maybe it’s time for gov’t to say sorry—Bello
Japan brings back virus restrictions over Omicron surge
Over 3 Million worth of prizes to be won at Smart Padala’s SENDali Manalo Promo!
Gear up and get ready to play with Yamaha Mio Gear
MOST READ
1Sambayan names 7 aspirants in its 2022 Senate lineup
Emma Stone calls Andrew Garfield a ‘jerk’ after he ‘lied’ about his ‘Spider-Man: No Way Home’ appearance
Guevarra to Acosta: Obey rules on unvaccinated
PH to import 60,000 tons of fish to cover shortage
Don't miss out on the latest news and information.