So stumbles again, losing in 8th round of US Chess meet | Global News
Close
menu
search 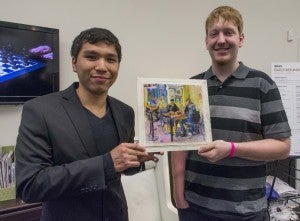 Wesley So (left) with grandmaster Samuel Sevian in the US Chess Championships in Saint Louis. PHOTO BY LENNART OOTES.

LAS VEGAS, Nevada – Wesley So took another tumble, losing to Conrad Holt in the 8th round April 9 of the US Chess Championships in Saint Louis, Missouri.

With frontrunner Hikaru Nakamura winning his own game, it’s now practically hopeless for So to catch up in a tournament billed to be the Bacoor, Cavite native’s coming out party in the United States.

So sacrificed a bishop for two pawns to gain momentum and positional advantage in the middle game.

Playing the white pieces, Holt refused to panic, and despite castling late and having his king exposed with unconnected kingside pawns to defend it, he persevered with the threat of mate in several instances.

But with time pressure, So missed some winning lines, and in the end Holt banked on his two rooks and a queen against So’s queen and a sole rook to prevail in 31 moves of a Queen’s Indian.

It was So’s third loss against as many victories and a draw to tie for third to fifth places with two others.

The 27-year-old Nakamura flashed his dominant game for the first time and crushed 16-year-old Kayden Troff in 34 moves of a Benoni.

In what analysts describe as a “demolition,” Nakamura, ranked No. 3 in the world in live ratings, threatened Troff with mate to force resignation.

He has now broken free of the 12-man pack with six points, half a point behind second-placer Ray Robson, who drew with Samuel Shankland.

It’s So’s first US Chess Championships, and his much-heralded showdown with Nakamura was the supposed highlight of the tournament. The two played to a draw when they met in the fourth round.

So and Nakamura draw at US Chess Championships