SAN FRANCISCO –- Commenting on the efforts of some Philippine civic groups to make her run for president next year, Rep. Leni Robredo told more than a hundred Filipinos who came to see her March 20 at the Philippine Center, “I’ve learned never to say ‘never.’”

The congresswoman from Camarines Sur’s 3rd District, recalled having to retract — at the last minute — her vow not to run for office after the untimely death of her highly respected husband, Jesse Robredo; the pressure from local residents was overwhelming, she said. She won by a landslide, defeating an opponent from a powerful local political dynasty.

“But I would really like to finish the work I started in my district because lot more needs to be done,” Robredo qualified.

While Naga may be a model city where a lot of reforms have borne fruit, she reported that poverty, malnutrition, bad governance and inefficient social services still haunt the surrounding towns in her district.

Not done with her district 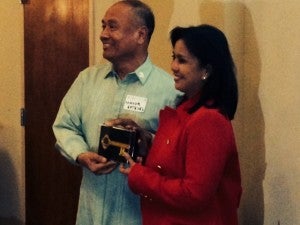 Robredo had spoken to “200 Bicolanos” in San Leandro, across the San Francisco Bay, and her public appearances here were among her first as a visiting elected government official of the Philippines. The UP Alumni Association of San Francisco hosted her speech at the Philippine Center.

Robredo related the many challenges her district faces, describing the poverty and deprivation of many local populations. For example, she recalled visiting a barrio school with “38 students and only nine chairs, the students rotating” who get to sit when.

Some of the problems she said needed only simple solutions, but some local government bureaucracies lack initiative and the spirit of public service.

As for the national picture, Robredo speculated that the country needs “ten or 20 years of continued economic growth and good governance” before material benefits can “start trickling down to the poor.”

She admitted being scared about what happens after 2016: “Will there be a continuation of reforms and transparency both in the national and local governments?”

Robredo famously takes public transportation, without a bodyguard, to and from her district and MetroManila. “People have made a big deal of this,” she said, “but this is what I’ve always done as a private citizen” and she didn’t see the need to change it.

In fact, she noted, part of the country’s problems stems from the “sense of entitlement” of many elected officials on all levels: “If you want to know if a political candidate can be trusted, one of the things you do is look at their lifestyle.” The more indulgent it is, she said, the less trust the candidate deserves.

Robredo said it was her experience during the EDSA movement to overthrow the Marcos dictatorship that renewed her hope for the Philippines.

“Our professors at UP encouraged us to join cause-oriented groups and protests, offering to give us ‘pass or fail grades,’” saying there were more important lessons to learn outside the classroom at the time.

It was also EDSA 1, she said, that spurred her late husband to be in public service with a mission of reform. Jesse Robredo served as mayor of Naga City for a total of 20 years before becoming local governments secretary at the time of his death in a plane crash in 2012.

Robredo urged her audience to launch a “revolution within us all,” to adopt a “communitarian spirit of being one for others,” so that economic progress and social justice could eventually prevail in the Philippines.