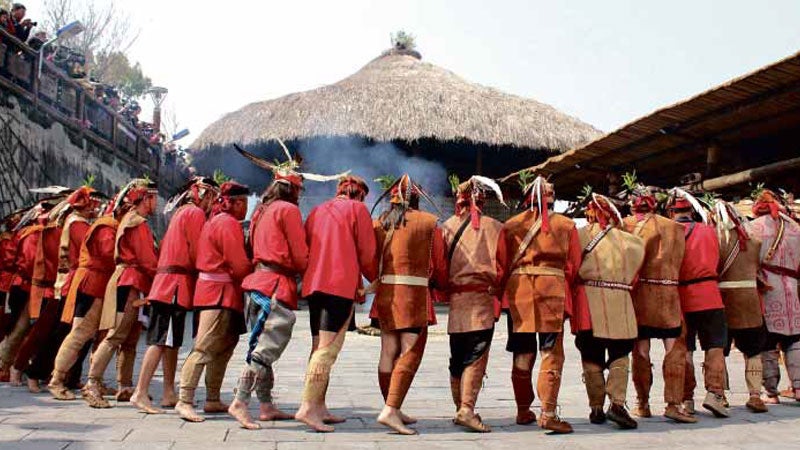 MEN OF THE TSOU tribe of Taiwan form a circle and chant to begin their annual ritual, the Mayasvi, which honors the tribal warriors of the past. Most of the tribe live in the majestic Alishan mountain in southern Taiwan. TARRA QUISMUNDO

TAIPEI—In communities of the indigenous Amis tribe across Taiwan, locals say lima for five, pito for seven and mata for eye, just like Filipinos. In southern Taiwan’s Alishan mountain, the Tsou tribe calls the community’s meeting hut a kuba, strikingly similar in design to the Philippines’ kubo.

Whether in language, architecture or way of life, links among indigenous peoples of the Philippines and Taiwan are undeniable, with both sides tracing their ancestry to the Austronesian migrations across the Pacific Islands thousands of years ago.

The ties are ever apparent as Taiwan’s indigenous groups continued to reemerge, a revival seen over the last three decades. Once neglected and kept to themselves, Taiwan’s tribal peoples have now become rock stars.

Today, Taiwan’s 540,000 indigenous peoples—a two percent segment of the total 23 million—are prominent in Taiwanese daily life, from billboards and stage shows to their own television stations, newspapers and even rap albums.

With this rise came the urge to reach out to their Austronesian brothers and sisters, eager to have not just their history and ancestry as a common ground, but also a shared future.

“As of our understanding, there is a close bond between Taiwan’s Lanyu Island and the Philippines’ Batanes Islands. There is much similarity in language, culture, geography and climate, for example, frequent typhoons,” said Jouan Pan of Taiwan’s Council of Indigenous Peoples (CIP).

Pan, an international affairs official at CIP’s Department of General Planning, was referring to the Tao people of Lanyu (Orchid) Island off Kaohsiung in southern Taiwan and the Ivatans of Batanes in northern Philippines.

“Many factors and situations still cause obstruction between our Austronesian links, however, like the Guang Da Xing No. 28 incident,” Pan said, in reference to the May 9, 2013, shooting of a Taiwanese fishermen at the Balintang Channel off Batanes.

Eight Philippine Coast Guard personnel are on trial for the shooting, which once drove a wedge between Manila and Taipei. But both sides have since vowed to move on, with Taiwan withdrawing threats of sanctions against the Philippines following President Aquino’s apology for the incident.

“On the other hand, the cultural side is progressing. For example, the international Austronesian conference that Taiwan would host would invite participants from the Philippines and all around the world,” said Pan.

“Although there seems a long way to go, with our efforts, we believe the result would turn out to everyone’s satisfaction,” the official added.

Several tribes from the Philippines and Taiwan were known to have descended from the prehistoric Austronesian people, a group that began settling across the Pacific islands some 6,000 years ago.

In the case of the Tao or Lanyu people, several studies have shown that the group traces their ancestry to the Ivatans, fleeing Batanes during the Spanish occupation.

Budget Secretary Florencio Abad, a Batanes native who has been closely involved in studying links between the Tao and Ivatan peoples, said research have shown genetic affinities between the two peoples.

“A DNA test was conducted by a combined team from a university in Taiwan, the National Museum and the Australian National University. The test showed the same DNA structure,” said Abad when reached by text message.

The National Museum has established an extension office in Batanes “to dig deeper into the Austronesian roots of the Ivatans and their relationship with the Lanyu (Tao) people,” said Abad who, as former congressman of the lone district of Batanes, had traveled to Taiwan to learn more about the Ivatan-Tao links.

Among other tribes in Taiwan, language similarities with the Philippines abound, owing to shared roots in the Austronesians.

Huang Wei-chen of the Center for Indigenous Studies at the National Taiwan University cited parallelisms among words across tribes with Austronesian origins, including tribes in Taiwan, the Philippines, Indonesia, Fiji, Palau, Samoa, the Maori of New Zealand and Hawaii.

“The phonological correspondences among Austronesian languages only show that those modern languages descend from the same ancestral language,” said Huang.

He said Austronesian-linked cultures, usually a minority in their home countries as in the case in Taiwan, should work together and “participate in the wider Austronesian global indigenous world, so they can be a majority.”

“They can discuss common socioeconomic or cultural issues they have faced and work and fight together. They do not need to be limited by national boundaries but can be free to join the world and control their own future. This is what we wish to see,” Huang said.

The National Museum of Prehistory (NMP), a state-of-the-art repository of Taiwan’s prehistoric past in Taitung City, is also keen to establish ties with the Philippines’ National Museum to pursue joint projects.

“I think it is crucial to have closer relationships between Taiwan and other Austronesian communities, or societies. The relationship is based on the historical or cultural linkages which go beyond the limitation of national boundary set by the contemporary state,” said Fang Chun-wei, research assistant at the NMP.

“As a result, my director and I are convinced that the NMP should play a significant role in reconnecting Taiwan and other Austronesian societies through their common cultural heritage and history,” said Fang, who looks after the museum’s delicate Austronesian collection.

Given prehistoric links among its tribal peoples, Taipei and Manila signed a memorandum of understanding on a “cooperation on issues affecting indigenous peoples” eight years ago.

The pact mandated Taiwan’s CIP and the Philippines’ National Commission on Indigenous Peoples to share experiences on dealing with tribes peoples’ issues and to facilitate partnerships among institutions, schools, organizations and other government agencies.

At 3,600 hectares or less than the size of Luzon, Taiwan is home to half a million indigenous peoples.