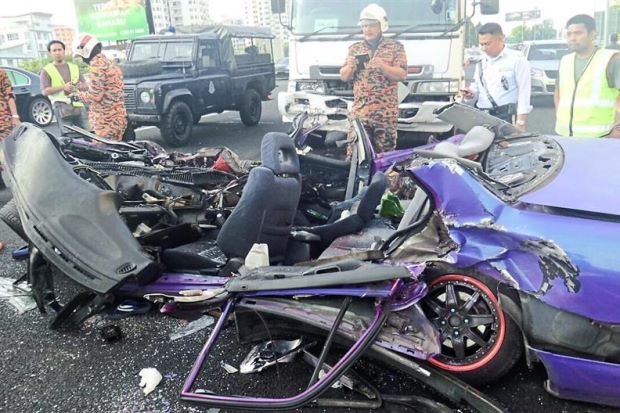 Three people riding in a car were crushed to death by a garbage truck Sunday in the Malaysian state of Petaling Jaya, according to a report by The Star Online of Malysia.

The report identified the fatalities as married couple Tan Meng Hua, 65, and Lion Ah Lowo, 58, and their neighbor Tan Aun, 63.

Petaling Jaya traffic police chief Deputy Supt. Mohamad Roy Suhaimi Sari said the three were on board a Proton Wira car when the accident occurred at around 6:40 a.m. along the North Klang Valley Expressway.

Sari said the accident happened in an area that was undergoing road works.

He said the car rammed into one of the traffic cones, causing the driver to lose control. The car then skidded in front of a garbage truck and another car on the opposite lane.

The three occupants were crushed by the garbage truck and died on the spot.

The driver of the other car had a broken arm, while the garbage truck driver was unharmed, the report said.

The report also quoted DSP Mohamad Roy as saying the police had yet to determine the cause of the accident. AU/ANN/The Star Online